🏰 The 51 Castles of French-speaking Switzerland in 2020

The golden age of fortified castles (châteaux forts) ranges from the 11th to the 13th century when they are built, then declined rapidly from the beginning of the 15th century with the appearance of powder artillery around 1370 and the metal ball around 1450. The vast majority of castles in French-speaking or Western Switzerland are built, financed or inspired by the Counts of Savoy, who became Dukes in 1416.

The castles have been relatively well preserved over time, few of them have disappeared like those of Palezieux or Bossonnens in the state of ruins. Some of them cannot be visited because they are in private hands but others in the canton of Fribourg, although they are in public hands, house the administration of the district capitals and are therefore not visitable.

A video report from the TV show “C’est pas sorcier” about fortified castles.

The components of a fortified castle

Here is a small glossary that will help you to find your way around a fortified castle.

An aerial view of Chillon Castle with a description of its various elements. 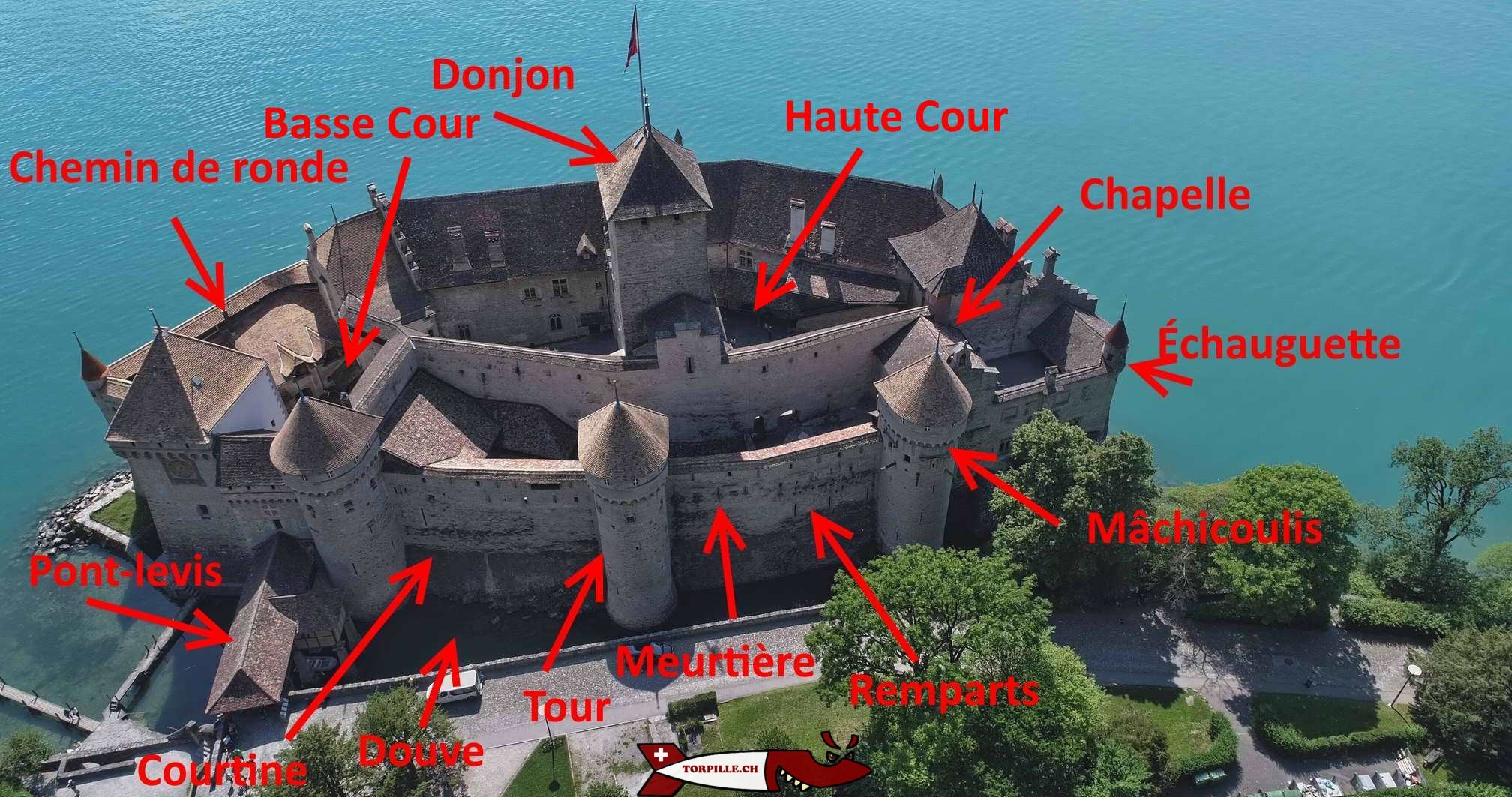 A video showing the different elements of a fortified castle.

Dozens of castles are listed in French-speaking Switzerland, la Torpille team visits the most important of them and only the castles dating back to the medieval period before 1450.

The following castles are not inventoried by the Torpille team:

The tower of Chalais is not inventoried by the Torpille team. 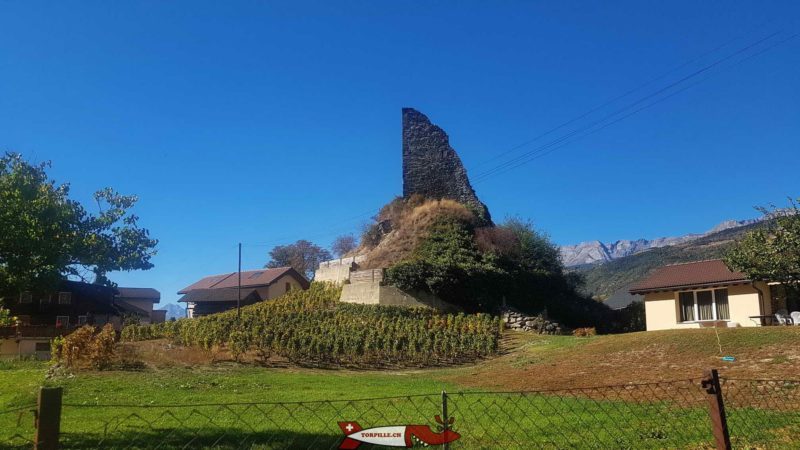 The castles of French-speaking Switzerland may be in different states of conservation and can be categorised as follows:

Large-sized castles which can be visited and kept in their original state:

The castle of Oron remarkably preserved.

Castles of important sizes which can be visited but recycled in museums:

The castle of Nyon contains the historical museum and porcelain.

Private castles not open to visitors:

The Château de Blonay has been owned by the de Blonay family since its creation.

Castles owned by a canton or commune but not visitable:

The castle of Bulle cannot be visited despite a magnificent structure known as the “Savoyard square”.

Castles in ruins with a visitable keep:

The spiral metal stairs inside the keep of the Saxon castle.

The 9 most beautiful castles to visit

As mentioned above, not all castles in French-speaking Switzerland can be visited. The Torpille team lists below the 9 most beautiful castles to visit in order starting from the most beautiful.

Chillon Castle is by far the most beautiful castle in French-speaking Switzerland. Located on a rocky island near the shore, it was mainly built by Savoy in the 12th century as a symbol of its power. The visitor follows an signposted path that allows him to discover the entire structure. It is an attraction to see absolutely!

A sailing boat next to Chillon Castle. On the left is the Chillon motorway viaduct.

A video of Chillon Castle.

Château de Grandson is an imposing monument built on the shores of Lake Neuchâtel. He witnessed the Burgundy Wars, a key event in the history of French-speaking Switzerland and of the whole of Switzerland, which opposed the Swiss to the army of Charles the Bold at the end of the 15th century.

Chillon Castle from the car park next to the reception. 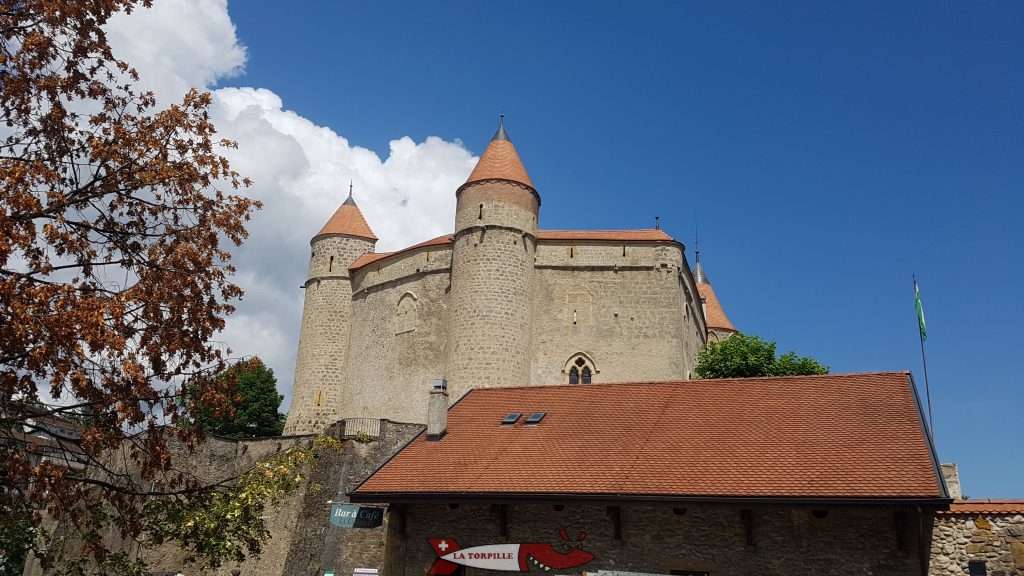 A video of Grandson Castle.

Château de Gruyères is built on a hill overlooking the magnificent Gruyère region. It is built next to the old town of Gruyères in which you should not miss to stop to taste a half and half fondue (fondue moitié-moitié) and meringues.

Aerial view of the castle of Gruyères with the adjoining old town.

A video of the castle of Gruyères.

Oron Castle is a small but very well preserved castle northeast of Lausanne.

Oron Castle with its keep on the right.

A video about Oron Castle.

The Sarraz Castle is a very pretty castle between Yverdon and Lausanne at the foot of the Jura. It has two large towers, partially rebuilt after the Burgundy Wars. In recent centuries, a section of the ramparts has been demolished to bring light into the courtyard.

The castle of Sarraz with its two towers.

A video of Sarraz Castle from a drone.

Château d’Aigle is located in the Chablais region of the Canton of Vaud in the middle of the vineyards. It was conquered by Bern at the expense of Savoy after the Burgundy Wars in the 15th century and then returned to the new canton of Vaud at the end of the 18th century. It houses the Museum of Vines and Wine.

The Castle of Aigle in the middle of the vineyards.

A video about the castle of Aigle.

Valangin Castle is located between the city of Neuchâtel and the View of the Alps (Vue des Alpes) on the banks of the Seyon Gorge. It has an elegant central structure that serves as a main building and keep that is surrounded by partially ruined walls.

The castle of Valangin with the surrounding walls.

A video of Valangin Castle from a drone.

Tourbillon Castle is located on one of the famous hills of Sion opposite the fortified basilica of Valère.

The steep path leading to the Castle of Tourbillon.

A video about the castle of Tourbillon.

Overlooking Martigny, the Castle of Bâtiaz dominates the region with its high keep from which one can enjoy a very beautiful view. The castle overlooked the Rhone Valley towards both Sion and Saint-Maurice. He also monitored the path leading to the Great St Bernard Pass to reach Italy.

In the castle courtyard there are interesting reconstructions of medieval war machines such as the trebuchet.

The Castle of Bâtiaz with its imposing keep.

A video about the Bâtiaz castle.

The 7 most beautiful castles that are not open to visitors

There are some very pretty castles in French-speaking Switzerland but unfortunately they cannot be visited because they are in private hands or reserved for the district administration. Nevertheless, it is worthwhile to come and see them. The Torpedo lists below the 7 most beautiful castles that cannot be visited in order starting from the most beautiful.

The castle of Vufflens is the most important castle in French-speaking Switzerland with the castle of Chillon. Entirely made of brick, it is particularly impressive with its magnificent structure and imposing keep. It belongs to Saussure’s family.

The castle of Vufflens with its vineyard.

A video of Vufflens Castle from a drone.

Lucens Castle is a very pretty castle located in the north of the canton of Vaud. It impresses particularly by its elegance and in particular its many small side turrets. After the Bernese left, it became the property of the canton of Vaud in 1801, which put it up for sale. Since then, the castle has remained in private hands.

The castle of Lucens with its many watchtowers.

A video of Lucens Castle from a drone.

Blonay Castle is a castle built on a hill in the heights of Vevey at the foot of the Pleiades. The Blonay family still owns this very pretty castle, whose keep resembles that of Chillon Castle.

The castle of Blonay with its central keep.

A video of Blonay Castle from a drone.

The Chenaux castle in Estavayer-le-Lac is a castle built by Savoy counts. It houses the administration of the services of the Broye district. The “circuit of the ramparts” of about ½ hour allows you to discover the old defensive structures of the city.

The castle of Chenaux in Estavayer-le-Lac.

A video of the castle of Chenaux.

The Castle of Champvent is located in the immediate vicinity of Yverdon in the north of the canton of Vaud. It is a beautiful building built according to the principle of the “savoy square”.

A video of the castle of Champvent from a drone.

Vaumarcus Castle, located between Grandson and Neuchâtel, is an elegant castle lined with small elongated turrets. It overlooks the vineyard and Lake Neuchâtel. In the 15th century, he witnessed the Burgundian wars.

A video of Vaumarcus Castle from a drone. 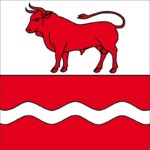 The Castle of Bulle is an imposing castle in the centre of the town of Bulle. It is built according to the “savoy square” model with a powerful keep.

The castle of Bulle with the Keep on the right.

A video of an aerial view of the castle of Bulle.

The following link shows the geographical location of the castles in French-speaking Switzerland. 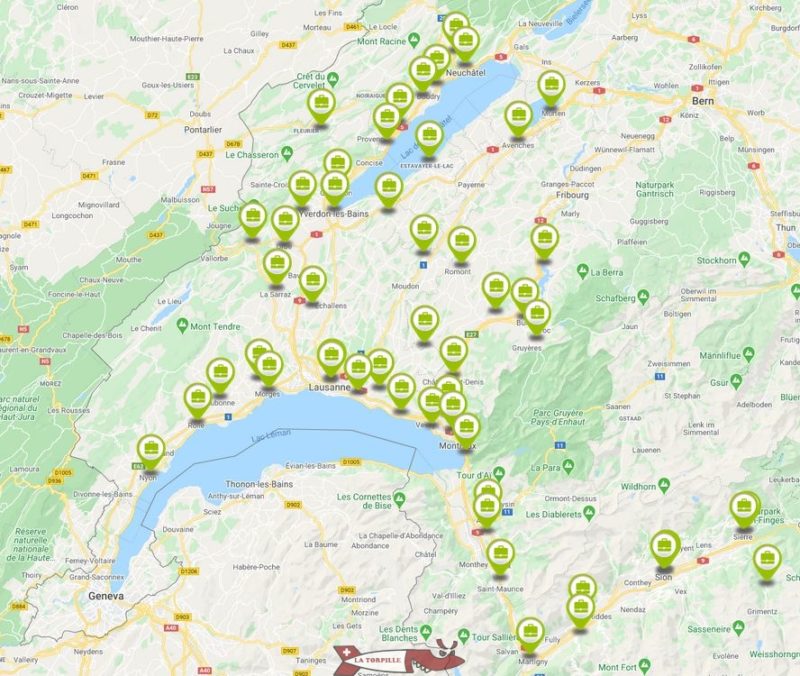 What is the most beautiful castle in French-speaking Switzerland ?

Which are the two castles to visit first ?

Which castles suffered the greatest attacks ?

What are the castles built according to the type known as the “savoy square” ?

What are the castles on the shores of Lake Geneva ?

Which two cities have best preserved their medieval appearance ?

What is the only castle in French-speaking Switzerland built on an island ?

Which castles host a museum ?

What are the main castles owned by the bishopric of Lausanne ?

Which castles have kept their drawbridge ?

Since what age can a child visit a castle ?

What is the largest castle in the world ?