🧗 The 48 Climbing Rooms of Western Switzerland in 2020

🧗 The 48 Climbing Rooms in French-speaking Switzerland in 2020

The rooms dedicated to climbing have grown significantly in French-speaking Switzerland since 2010, particularly in the Lake Geneva region. Laniac’s climbing room is the first room opened in 2005 in Bulle. The idea is to climb a track along a wall using sockets of the same color. Each route is labelled with its own level of difficulty.

The different holds in the climbing room.

The disciplines of climbing are as follows:

Among the three disciplines of climbing, two disciplines are available in the halls of French-speaking Switzerland: bouldering and lead climbing. The third discipline is speed, where two climbers climb a vertical wall at the same time and as quickly as possible. Lead climbing is practiced by a rope and the appropriate equipment with a partner or alone with a reel at a height of about 12 meters.

The bouldering discipline is limited to 4.5 meters but climbs without belay, padded mats cushion any fall. It is particularly popular today because it can be practiced alone and without rope. The block offers a friendly look by allowing several climbers to try to climb one track after the other while staying close to the ground and much shorter than with a wall 12 or 15 metres high.

The climbing rooms of Western Switzerland

Climbing rooms are classified into two categories by la Torpille:

The main rooms listed by La Torpille have the following particularities:

The 20 climbing halls in French-speaking Switzerland are mainly located in the canton of Vaud on the Lake Geneva area. Below, the geographical distribution by canton:

The main climbing halls are classified in two categories

The climbing room C+ Urban Climbing is located in Colombier in the commune of Milvignes in the canton of Neuchâtel just next to the aerodrome. It contains 5 parts:

The Sottens climbing gym is one of the oldest in French-speaking Switzerland. It is located in Sottens in the Gros-de-Vaud region between Lausanne and Yverdon. It offers large lead climbing areas, an adult block and a children’s area.

The inside of the climbing room.

Built in 2005, Laniac Escalade’s climbing gym is the oldest in French-speaking Switzerland. Small compared to the other rooms, it still offers boulder and lead climbing.

Inside the climbing room with a reel for solo climbing.

A video about Laniac’s climbing gym.

The Chavornay climbing wall is located in the centre of the former Chavornay mills.

The building of Chavornay’s climbing room.

One of the climbing rooms.

A video on the Chavornay climbing wall.

Rocspot is located west of Lausanne. The hall is one of the largest in French-speaking Switzerland with a large lead climbing area and an imposing central block. It is the only room to offer track climbing outside and is held by the same owner as BlocZone.

The Rocspot room building with the external climbing wall.

Rocspot’s central block with the high walls around it.

Vertic-Halle is one of the largest climbing halls in French-speaking Switzerland and the only one in Valais. A boulder is available in summer outside.

A high wall of Vertic-Halle with a reel.

A video about the climbing gym at Vertic-Halle.

The Moubra climbing hall is a small climbing room located in the resort of Crans-Montana inside the tennis hall on the banks of the Moubra lake.

Bloczone’s climbing area from the cafeteria.

The climbing wall in the tennis hall.

A video on the Moubra climbing hall

The Villeneuve climbing centre opened its doors in December 2019. It is the largest climbing room in French-speaking Switzerland and the only one with a speed wall. It is located inside the RocVille shopping centre.

The main area of the Villeneuve climbing room.

A project of the “Multiprise SA” is currently being developed …

A model of the climbing room project in Le Locle. Photo: Arcinfo.ch newspaper 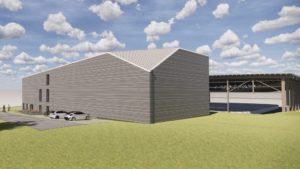 A project of the company grimper.ch is currently being developed …

A model of the climbing gym project in Satigny. Photo: ghi.ch newspaper 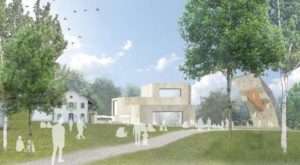 The boulder is a recent discipline of climbing. The climber ascends a wall from 4 to 5 metres high without being tied up with large mattresses on the ground to cushion a possible fall.

It is a very recent discipline and is very fashionable today because of the fact that the visitor can climb alone and its friendly side where several people can try alternately a way and thus create an emulation.

The construction and maintenance of bouldering rooms is also much cheaper since it is sufficient to have a height of 5 metres instead of about 13 metres for rooms offering lead climbing.

Dbloc is a block room in a house in the city of Bulle. It has a traditional side and climbing walls much less impressive than the brand new block rooms but keeps a good-natured friendly side and has a climbing face on the outside.

The house of the Dbloc climbing room. 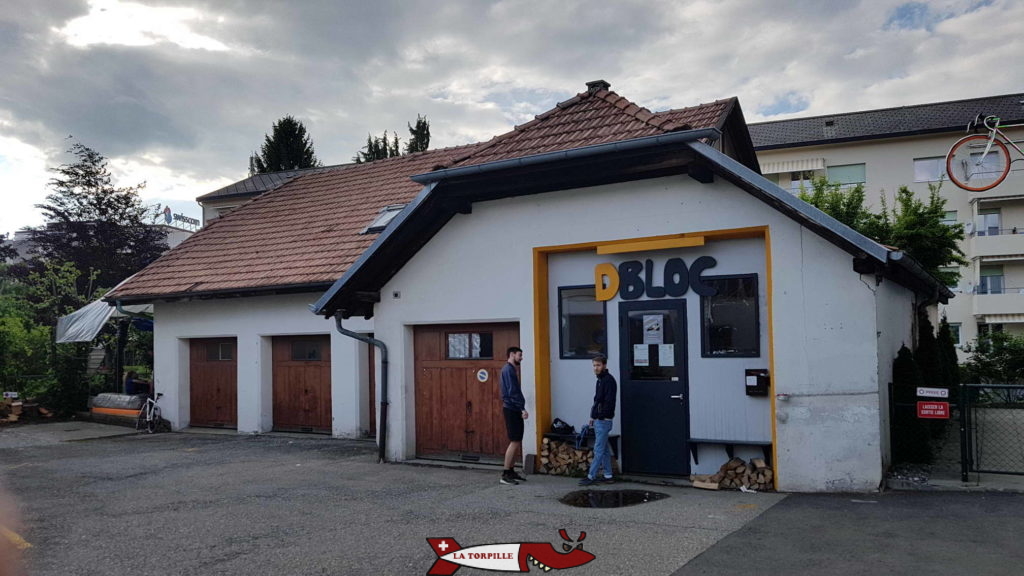 An outer block of Dbloc. 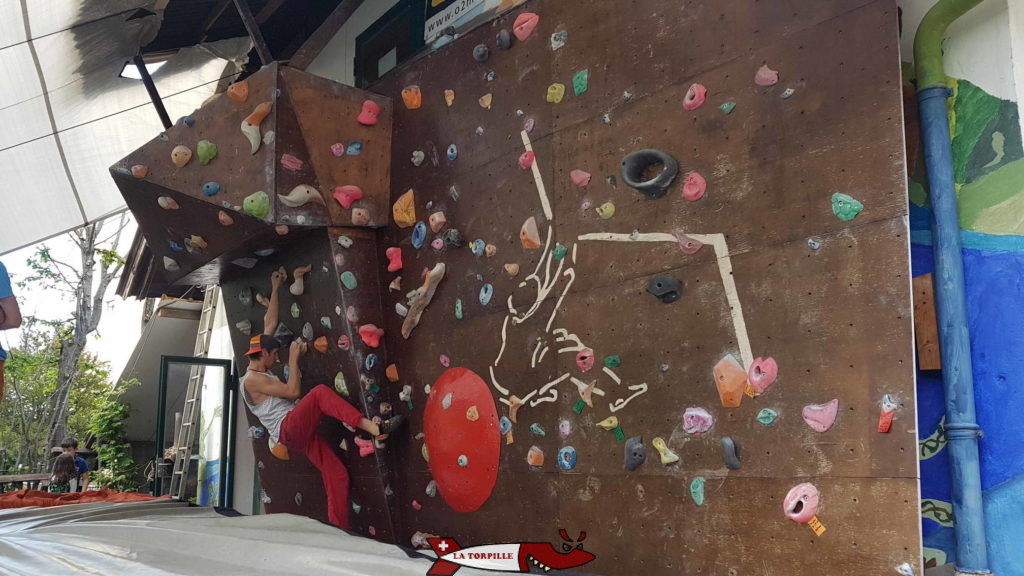 Le Cube is a climbing room in an industrial building of the Lausanne suburb of Mont-sur-Lausanne. It is a room that offers the largest climbing surface dedicated to bouldering with Totem Ecublens.

The entrance of the Cube with the parking lot.

The climbing room with many central blocks.

Totem Escalade Ecublens is the largest block room in French-speaking Switzerland. It offers a large area for children and an outdoor wall for summer.

Totem Escalade Gland is located in the same building as the bowling alley in Gland. It is part of the Totem chain dedicated exclusively to the block.

A video on in Totem Gland’s climbing room.

Totem Escalade Gland is located in a residential building in the heart of Vevey in front of Nestlé’s headquarters. It is part of the Totem chain dedicated exclusively to the block.

Totem Vevey’s room from the outsider.

Totem Escalade Versoix in the canton of Geneva is located in the Migros building. It is part of the Totem chain dedicated exclusively to the block.

A video on the Swiss bouldering championships at Totem Versoix’s climbing gym.

The climbing room in Monthey is dedicated solely to bouldering. It belongs to the Vertic-Halle company, which already owns a room in Saxon. Vertic-Halle Monthey also offers a children’s area with trampolines and tubular structures.

The building that contains Vertic-Halle Monthey.

The block with a part of the cafeteria.

L’Entrepôt (Warehouse) is a climbing boulder and trampoline hall in Bulle. It belongs to Laniac who already owns a climbing gym dedicated to lead in Bulle.

The block of l’Entrepôt.

Opening in 2020 in the city of Fribourg of a climbing gym of the company “Grimper.ch”.

Drag the table to the right to see all the results

Rocspot with a central block.

A Moonboard at the Cube. A Moonboard is an inclined plane on which a large number of holds allow you to train on chosen difficulty paths. Each wall position is equipped with a LED that lights up to indicate the socket to be used according to the chosen channel when connecting to the Moonboard with your smartphone via Bluetooth. The word “Moonboard” is not related to the moon but comes from its inventor Ben Moon, a climber and inventor of this system.

A climber on an overhanging track at Totem Gland.

Reels that make it possible to climb walls more than 10 metres high on your own in complete safety.

What is the best climbing gym in French-speaking Switzerland?

The Torpille team observed a good quality of the climbing rooms in French-speaking Switzerland. However, we are establishing here what we think are the best rooms:

Mapping of the main climbing rooms

See the cartography of the main climbing rooms in Western Switzerland. 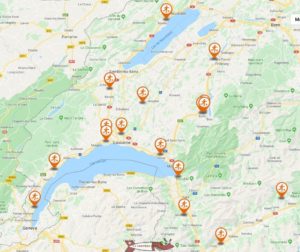 The 28 other climbing rooms in Western Switzerland

All the rooms listed below are not detailed by La Torpille for one of the three following reasons:

Rooms in the canton of Jura

The canton of Jura offers a high density of climbing halls:

La Torpille does not visit attractions in Canton Jura for geographical reasons. 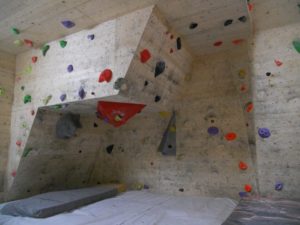 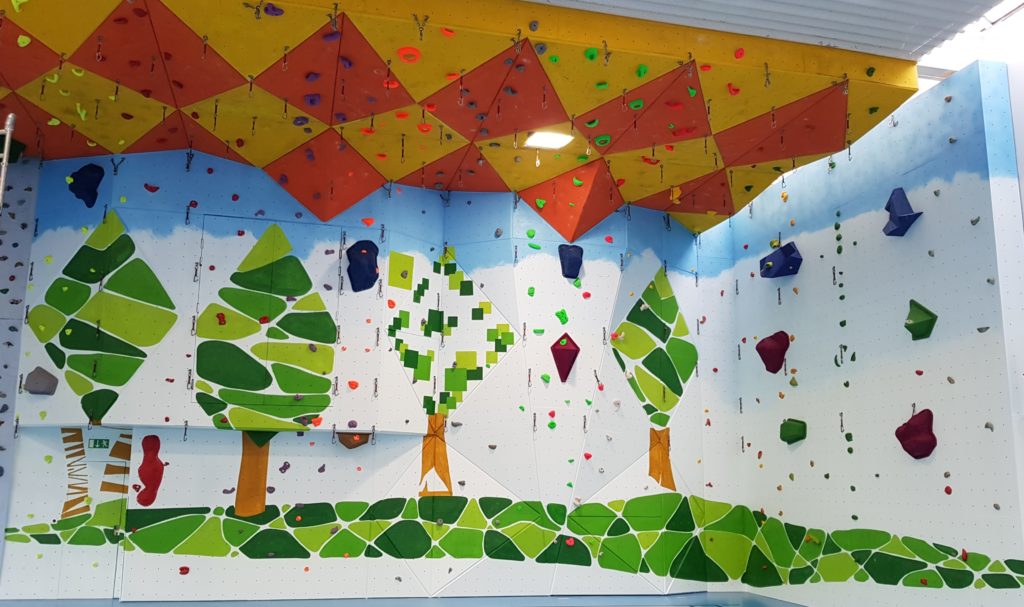 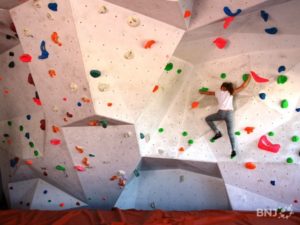 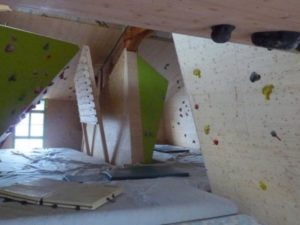 Rooms that are not freely accessible

The following rooms are accessible by being a member of a club or association. Access to the room is usually done with a magnetic card. 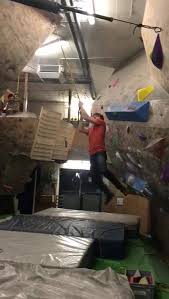 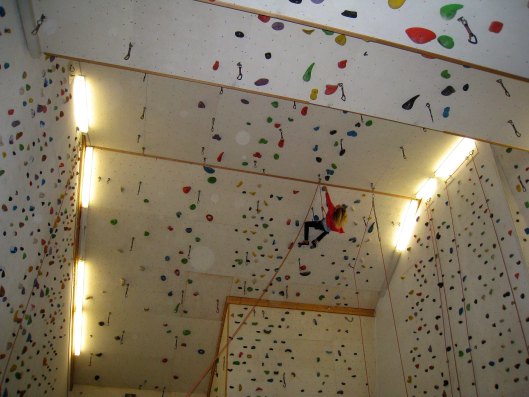 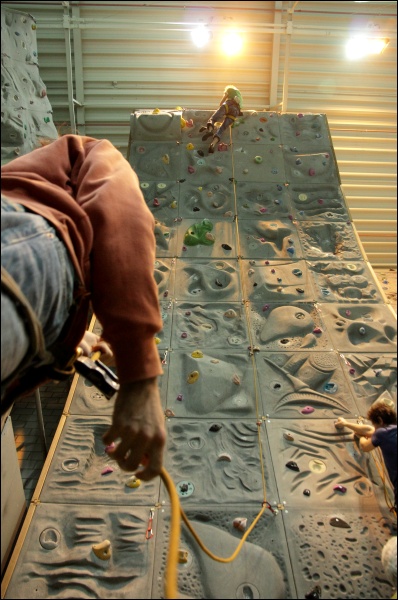 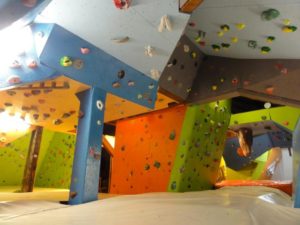 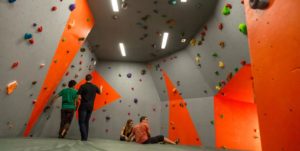 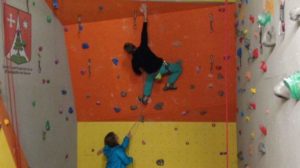 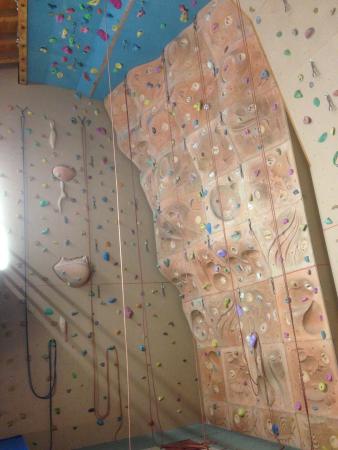 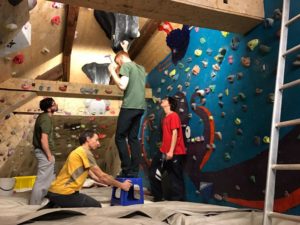 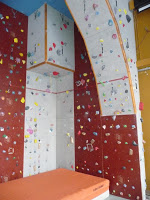 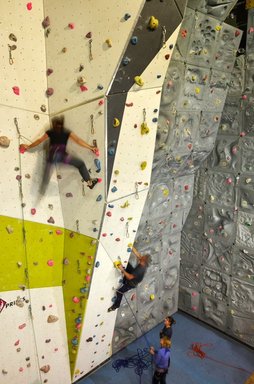 The following rooms are publicly accessible. They are smaller than the 20 main halls in French-speaking Switzerland and are associated with sports centres. 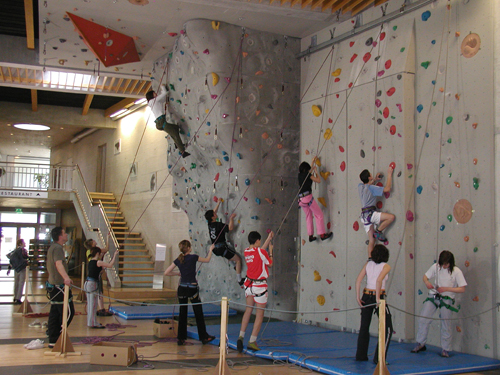 Several Swiss have distinguished themselves since the creation of the World Climbing Championships in the early 1990s. In the men’s category, the Jura rider Cédric Lachat (2007 and 2012) and the Geneva rider Elie Chevieux (1995) are both bronze medallists and in the women’s category Susi Good (1991 and 1993) and the Zurich rider Petra Klinger (2016) are world champions.

At the international level, two Frenchmen have left their mark with Patrick Edlinger, who introduced climbing to the general public in the 1980s, and Alain Robert, who specializes in climbing unassisted buildings. Born in the early 1960s, both suffered a very serious escalation accident.

Edlinger fell 18 metres in 1995 in the creeks of Marseille and suffered a cardiac arrest. Rescued by a doctor on site, he survived with only a few muscle tears. Unfortunately, he died in 2012 from an accidental fall down a staircase.

Patrick Edlinger shortly before his death in 2012. 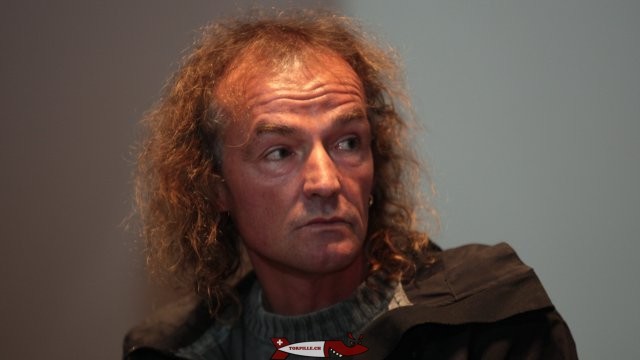 As for Robert, in September 1982, he made a terrible 15-metre fall head first on the rock following the breakage of the rope he had been given to rappel down. He suffered multiple fractures and a coma that left him handicapped in some joints and 66% disabled.

Alain Robert even survived another fall the following year in 1983, which also led to a coma. Nevertheless, this does not prevent him from becoming famous by climbing emblematic buildings all over the world without a security system, such as the Eiffel Tower in Paris, the Sidney Opera House, the Petronas Towers in Kuala Lumpur, the Burj Khalifa Tower in Dubai or the Empire State Building in New York.

Alain Robert in 2018 with a belay system. 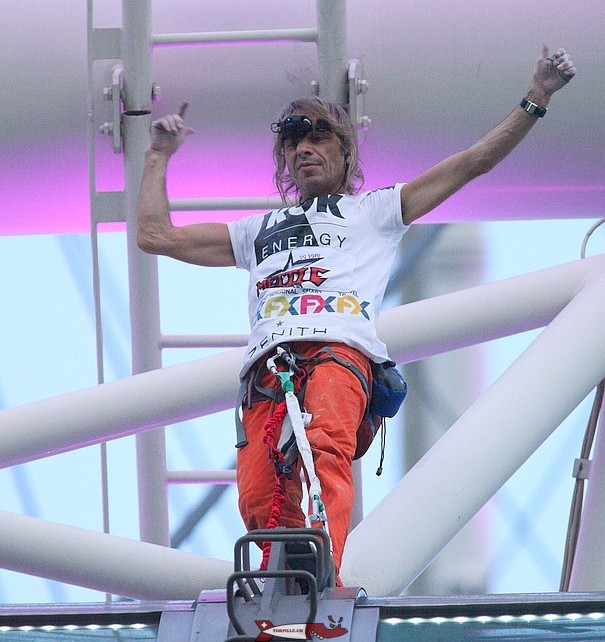 Climbing, with about 35 million fans worldwide, will logically become part of the Olympic Games in 2020 in Tokyo. Only one medal will be awarded in the men’s and women’s categories in the form of a combination of the performances of the three disciplines of climbing.

A video of the first ascent of a 9c, an exceptionally high level of climbing. The challenge is being carried out by Adam Ondra, a Czech climber born in 1993 on a track in Norway.

The questions concern the 20 main rooms in French-speaking Switzerland.

What are the free rooms in French-speaking Switzerland?

What is the largest block in French-speaking Switzerland?

What are the rooms where you can rent climbing equipment such as slippers or harnesses?

What is the oldest room in French-speaking Switzerland?

What is the only city with two climbing rooms?

What are the climbing rooms around Lausanne?

What is the minimum age for climbing?

Is it possible to do lead climbing alone?