The Tseuzier or Zeuzier dam (Barrage de Tseuzier in french) is one of the highest in Switzerland with an impressive 156m high vault. It is sometimes also called Rawil or Rawyl dam. Tseuzier is a locality located at the west of the dam while Rawil is a pass further upstream from the dam at 2429m and marking the border with the nearby canton of Berne. The dam itself is located both in the municipality of Ayent, which also includes the Anzère ski resort in the Hérens district, and in the municipality of Icogne in the Sierre district. The dam is located 6km from Crans-Montana and 4km from the Rawil pass.

The characteristics of the Tseuzier dam are as follows:

The 51 million m³ reservoir volume is low compared to other alpine dams of the same height. 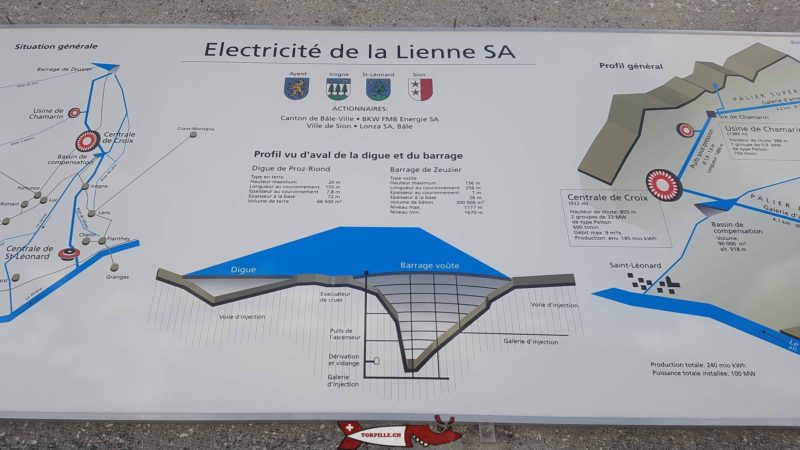 Next to the dam, we can observe a flood spillway and an earthen dike called the Proz-Riond dike.

Access to the dam by car is possible until the crowning. It takes 30 to 40 minutes by car from Sion. Be careful, access is, on the last kilometres, closed in winter and early spring due to snow and avalanche danger. The lake level is at its lowest in April and completely filled in September.

Comparison of the level of Tseuzier Lake in April and August. 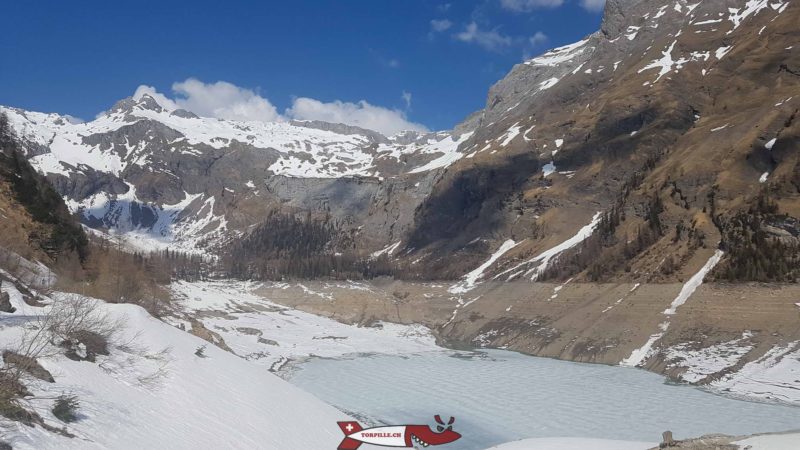 Comparison of the level of Tseuzier Lake in April and August. 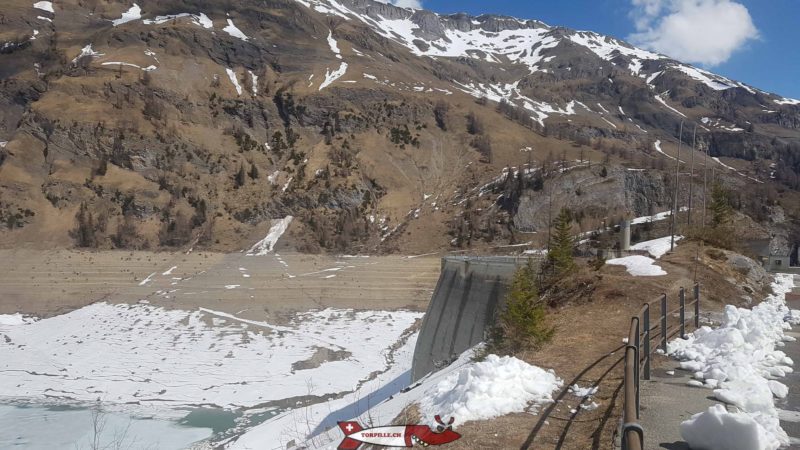 In addition to the observation of the dam and its impressive height, a tour of Lake Tseuzier is also worthwhile. The tour of the lake in summer is magnificent and takes a little more than an hour by walking quietly. It consists of a very nice 5-station educational trail maintained by the Zeuzier Foundation. In addition to this, you will go through the small suspended footbridge of Lourantse and the magnificent springs of the Lienne as cascading waterfalls.

The footbridge of Lourantse and the springs of La Lienne.

The various stations are made up of a metal binder that covers the following topics:

The description of the route around the lake with the different stations.

The detail of a station.

Trail around the lake of Tseuzier.

View from the dam

On the downstream side of the dam, you can enjoy a beautiful view of the Valais mountains south of the Rhône such as Weisshorn (4505m) and Dent Blanche (4357m). On the other hand, the mountains surrounding Lake Tseuzier are the Six des Eaux Froides at 2905m, the Wildhorn at 3248m (Bern border), the Schnidehore at 2937m (Bern border) and the Sex de Molettes at 2782m.

The mountains around Lake Tseuzier.

Note a magnificent viewpoint some time before reaching the dam by road at a hairpin turn with a viewpoint of almost 180° over the Rhone Valley. 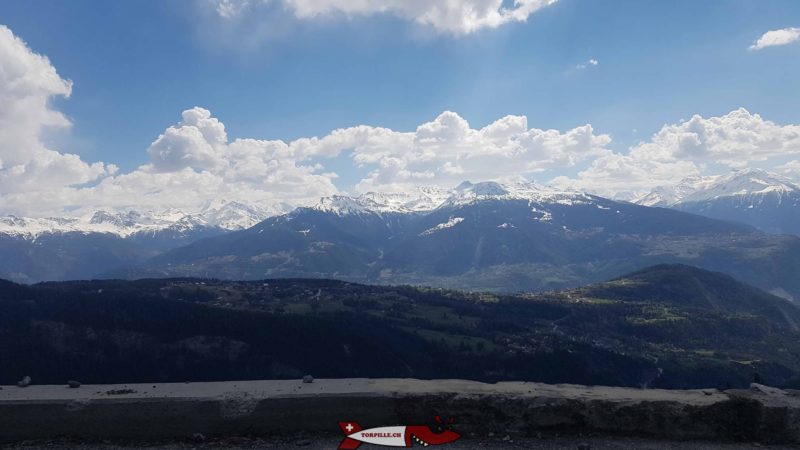 A penstock leaves the dam to be turbined at Croix power station by 2 Pelton turbines of 33MW each after a fall of 800m. A small part of the water goes to the Chamarin plant and its 0.9 MW Pelton turbine to supply the Ayent bisse.

After turbining at the Croix plant, the water then flows into the Croix compensation basin, which consists of a 15m high earthen dike. The basin is also supplied again by the waters of the Lienne, then goes to the Saint-Léonard plant in the Rhône valley through penstocks to be turbined there after a fall of 400 metres by 2 Francis 17MW turbines. The water then flows into the Rhône.

The total capacity of the Lienne river power plants is 100MW for an annual production of 240 GWh. A 2014 management report provides many details on the operation of the Tseuzier dam hydroelectric complex. 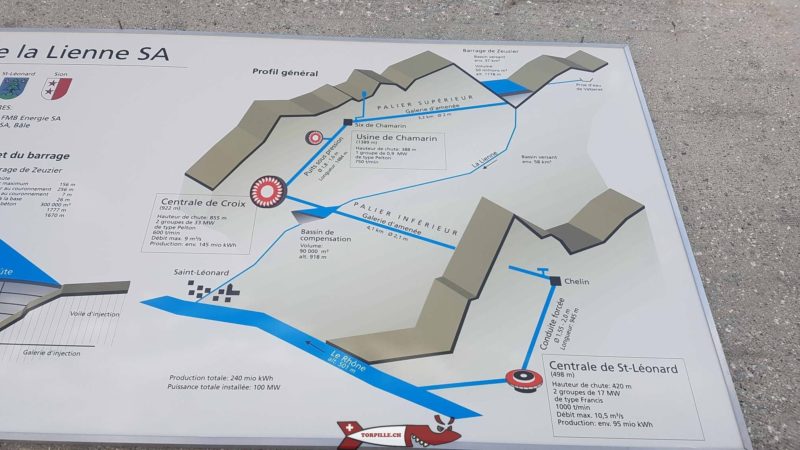 The Lienne River is completely interrupted after its passage through the dam and reformed downstream with the waters of the Ertentse to flow into the Croix compensation basin as indicated above. Then, it continues its natural path until it flows into the Rhône 15km after the Col de Rawil and its emergence. It should be noted that the water from the Lienne is turbined, between the Croix and Rhône compensation basins, by the small Beulet power station, which produces 2 GWh per year for a capacity of 0.7MW.

5 bisses start at the level of the Lienne valley. Despite the construction of the dam that could have drained them, they have been preserved.

West side of Lienne river:

East side of Lienne river:

The drawing of the different bisses that take their waters in the Lienne river.

The bisse de Sion along the path around the Tseuzier Lake.

A very good pdf document designed by the company Électricité de la Lienne SA (ELSA) shows very well the flow of the Lienne River, the power stations and the various bisses. Please visit the page of la Torpille dedicated to the bisses of Western Switzerland for more information.

Failure in the dam

In 1960, a road tunnel project is started to link Sion and Bern via the Rawyl tunnel between the Lienne valley in Valais and Lenk in Simmenthal in the canton of Bern. The project is approved by the Federal Government in 1966 and in 1973 the first underground drilling begins. At the end of 1978, cracks appeared at the Tseuzier dam following the drilling of the borehole gallery. Even if not all experts agree, the Federal Government admits that this gallery is responsible for cracks due to a compaction effect caused by drainage. The road tunnel was finally abandoned in 1986.

Since 2016, a drone is used to check for the presence of microcracks.

A drone video on the Tseuzier dam.

Webcam in Crans-Montana near the dam.