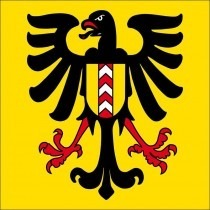 Neuchâtel Castle is a medieval castle built on a hill overlooking the city. It is located next to the collegiate church.

The eastern side of the castle of Neuchâtel. Behind it, you can see the peaks of the Collegiate Church. Source: Wikimedia Commons.

Parking lots are available in the city of Neuchâtel, then you have to walk up to the castle.

The castle of Neuchâtel can be visited in spring and summer in the afternoon with a guide for about an hour. The appointment without reservation is located under the porch of the castle at the beginning of each hour. In 2019, the visits begin at 2, 3, 4 and 5 p.m. The price of the visit costs 5 francs for people aged 16 and over and is free for children.

The different stages of the visit are listed below:

A map showing the castle on the right and the cloister with the Collegiate Church on the left. 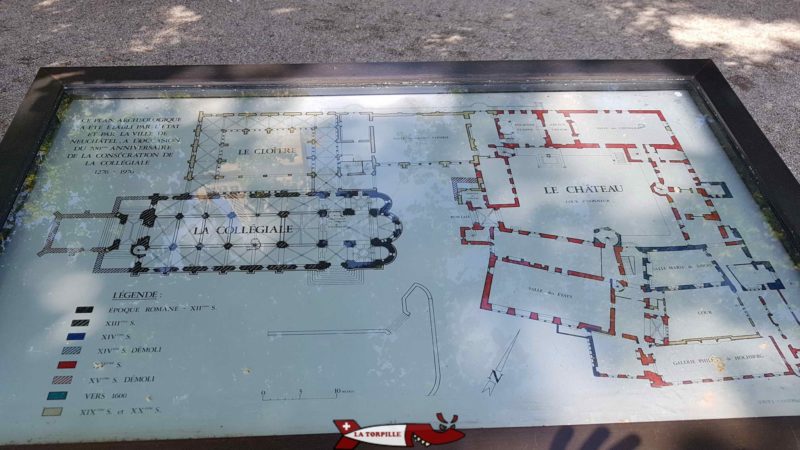 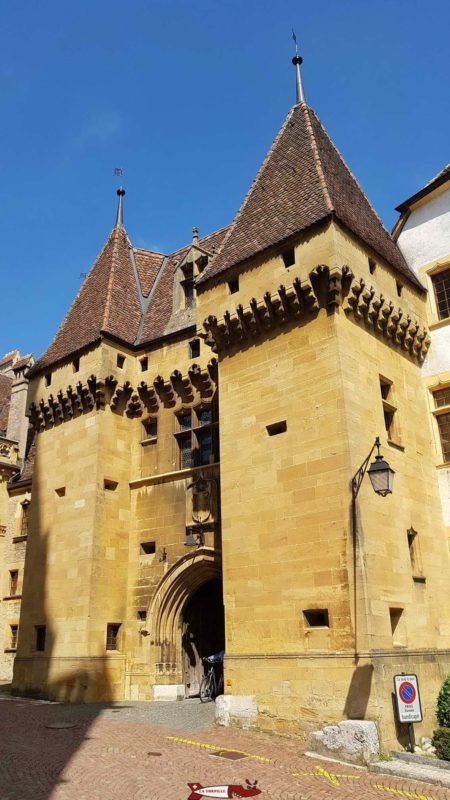 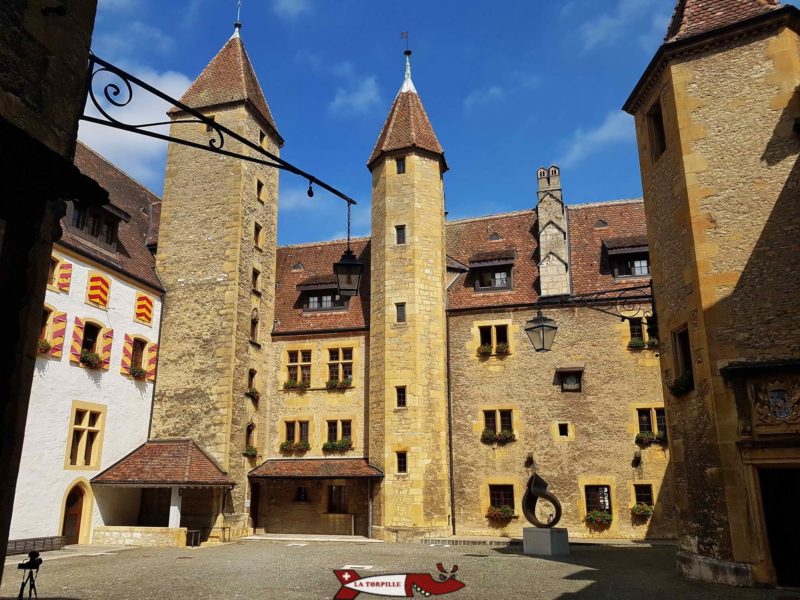 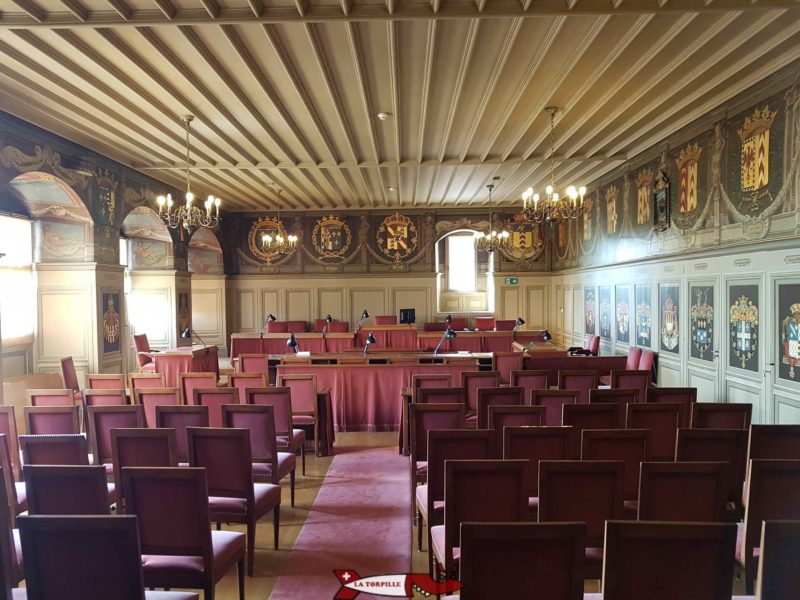 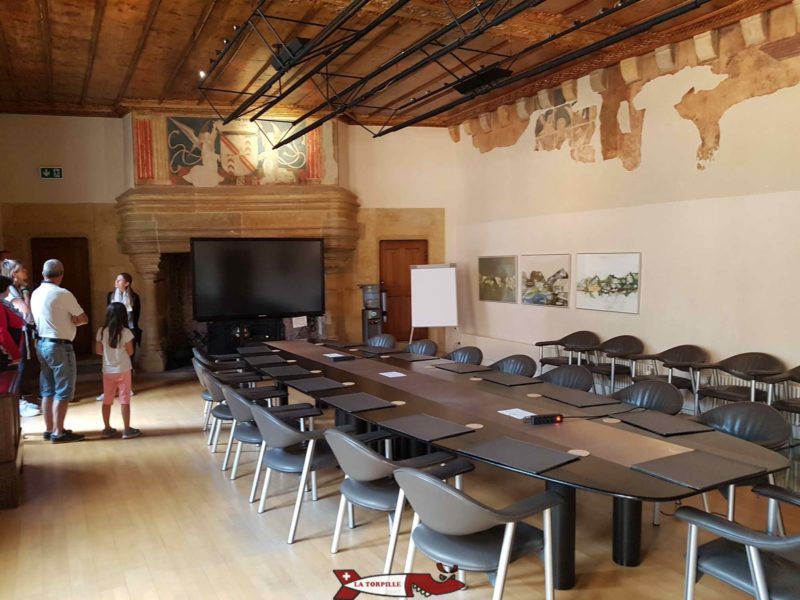 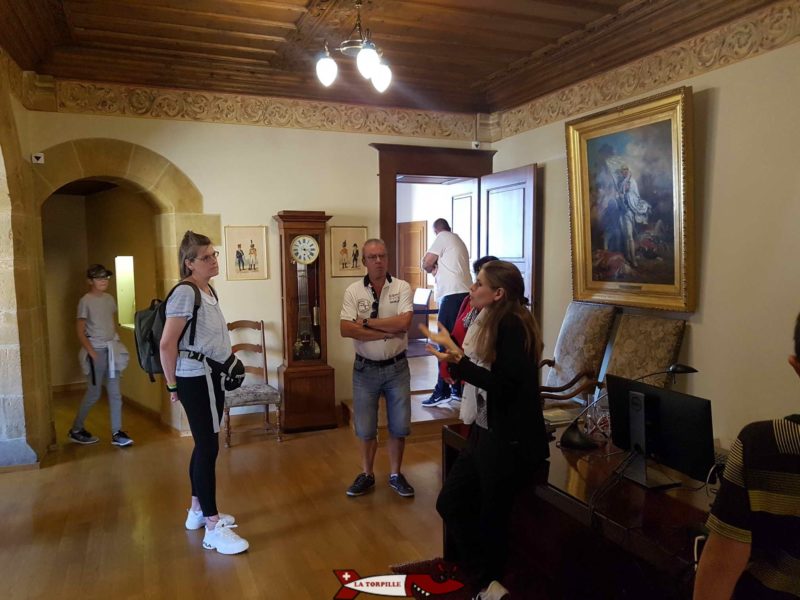 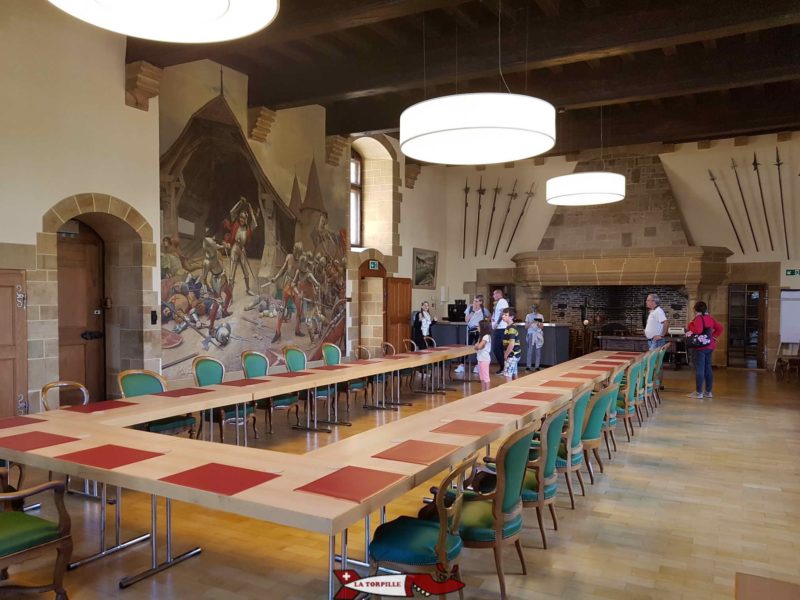 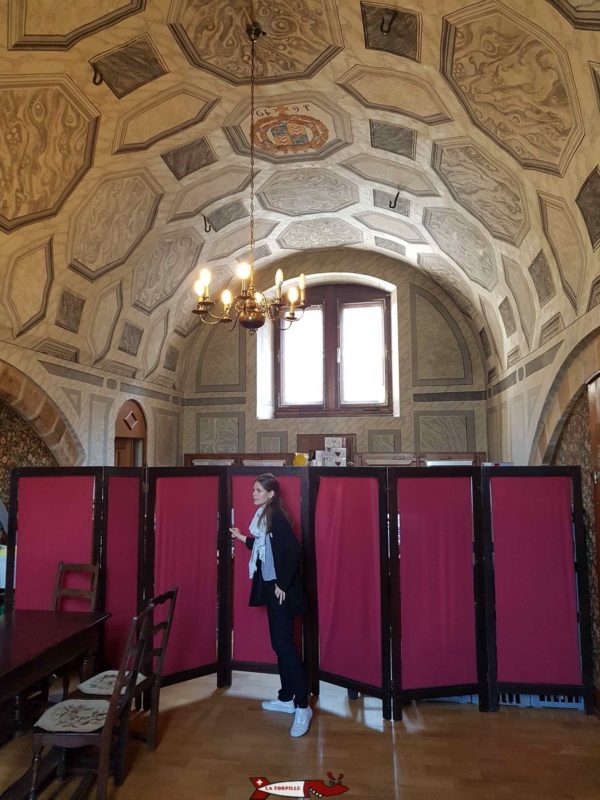 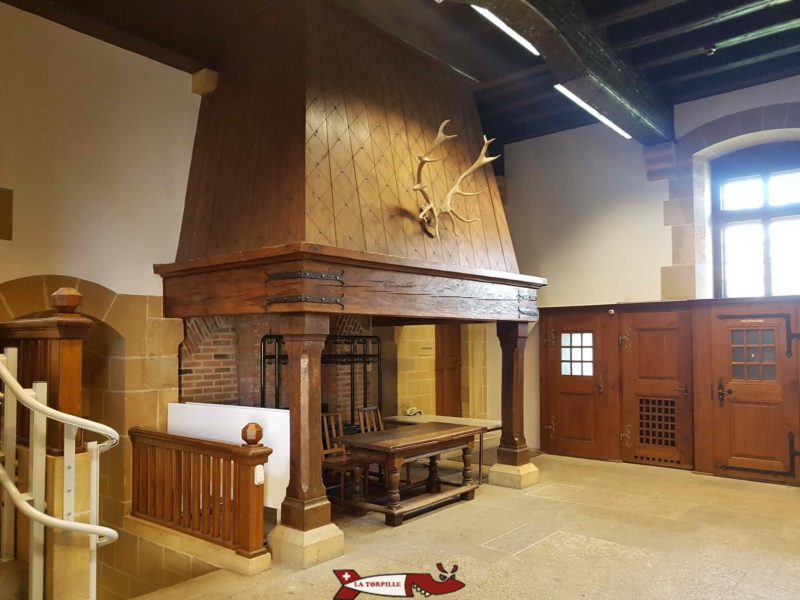 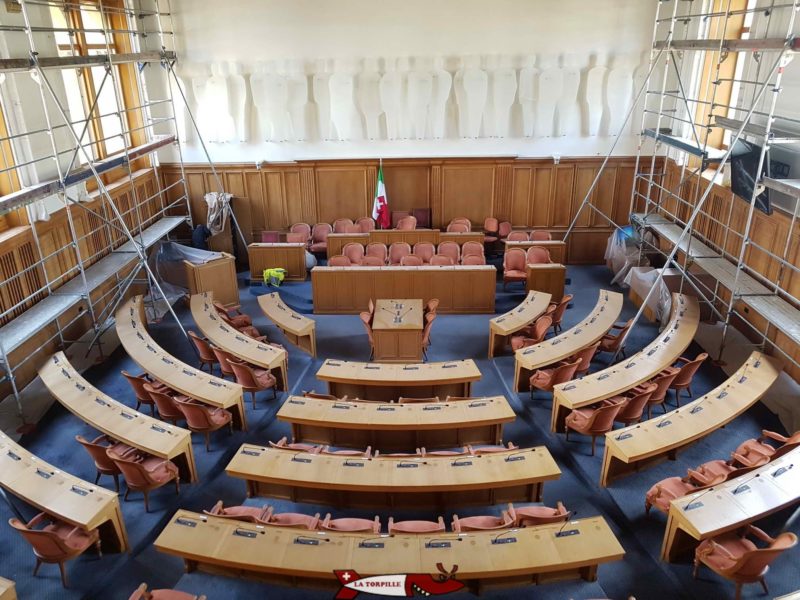 The construction of the castle of Neuchâtel began in the 12th century on a hill not far from the shore of the lake. It is, in a very summarized way, the possession of the following structures:

The castle was extensively remodelled until the 19th century and no longer has its medieval appearance. For example, its imposing entrance only dates back to the 19th century.

A model of Neuchâtel in the 12th century exhibited at the Museum of Art and History of Neuchâtel. The castle and the collegiate church at the top in the middle of the picture. You can see the Seyon River now channeled as a natural protection. The city is located between the castle and the shoreline. The latter is now nearly 3 metres lower due to the correction of the jura’s heights. Thus many of the land currently on the lake did not exist in the Middle Ages.

Next to the castle is the collegiate church of Neuchâtel, the emblematic figure of the city. In front of the entrance to the church is the statue of Guillaume Farel, a reformer from France who introduced the Protestant reform in the canton of Neuchâtel in 1530.

The collegiate church with its two towers on the back and the statue of Farel in the foreground. 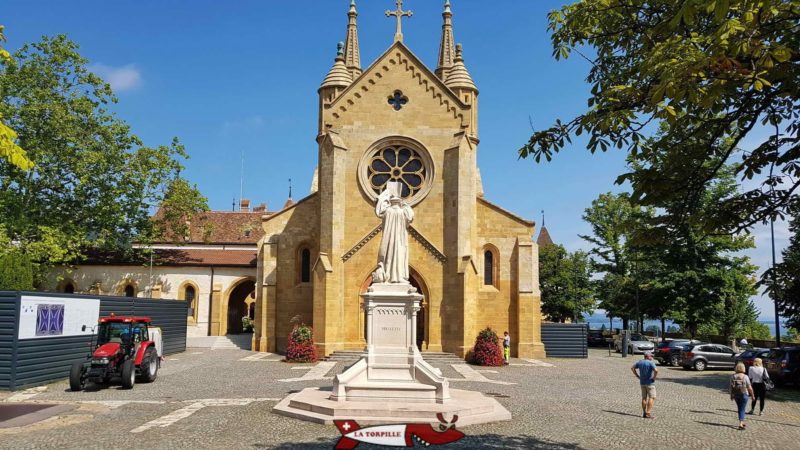 A close-up of the statue of William Farel erected in 1875. The reformer brandishes a Bible and symbolically crushes with his feet, the cult of saints and images in force with the Catholic Church. 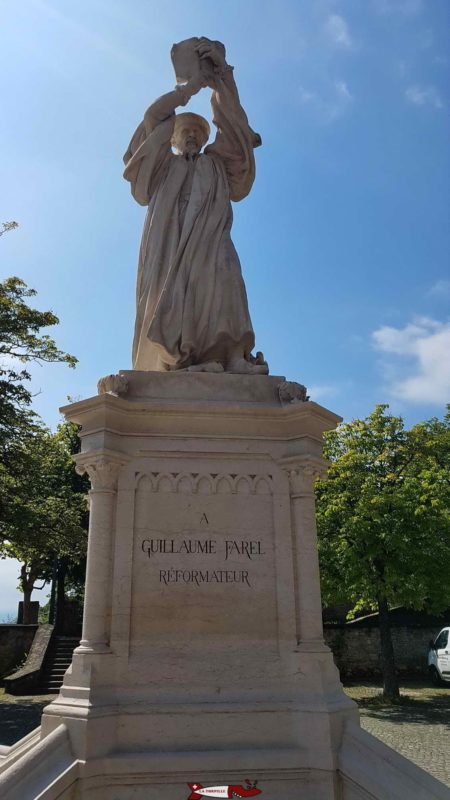 Ramparts and the prison tower

Nearby the collegiate church are the ramparts and the Prison Tower.

The Prison Tower, which served as a prison until 1848. 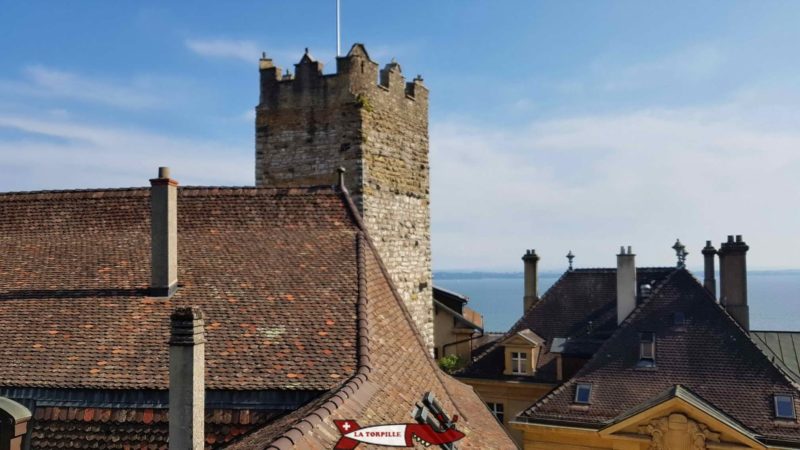 Part of the ramparts. 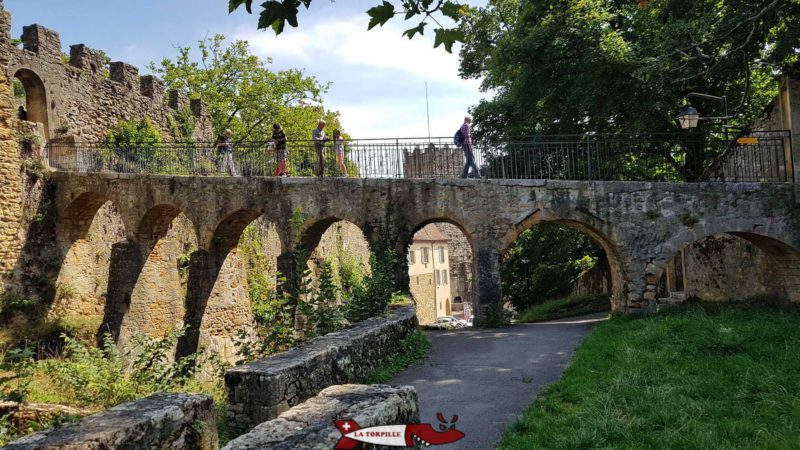 A video about the castle and the collegiate church of Neuchâtel.

Webcam on the city and lake of Neuchâtel.