Chillon Castle is the most beautiful castle in Switzerland and is the most visited site in French-speaking Switzerland with the Cailler House. It is located in the commune of Veytaux near Montreux in the Canton of Vaud and benefits from a strategic position at a gully between Lake Geneva and the steep rock face leading to the Rochers de Naye, which allows it to monitor the transit towards the Great Saint Bernard region. The castle itself is built on a rocky islet surrounded by water a few metres from the shore, giving it a privileged defensive position.

The Cailler House and the Rochers de Naye mountain.

Parking spaces along the cantonal road just before the castle coming from Villeneuve.

A must to visit

Chillon Castle is, with the Grande Dixence dam, the most impressive site in French-speaking Switzerland and a must to visit. An signposted route allows you to discover the entire castle and obtain all the useful information. The castle has kept its medieval exterior aspect while the interior allows you to fully appreciate the life in the castle at the time. Fortunately, it does not host museums that significantly alter the nature of the interior of a castle, as is the case in Morges or Yverdon, but rather appropriate thematic exhibitions.

The entrance to the castle with the Savoyard crest. A footbridge replaced the drawbridge in 1750. 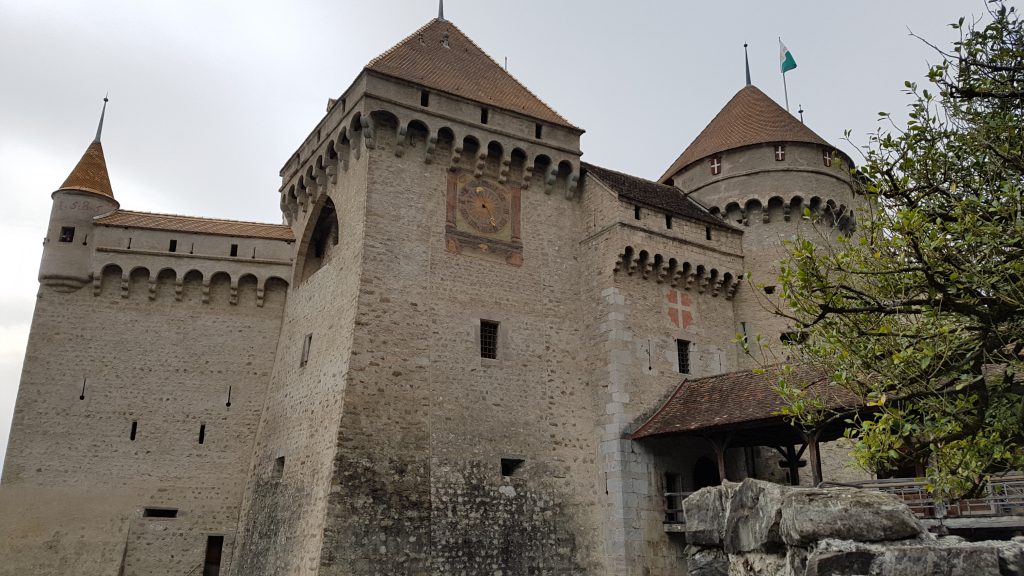 Around the imposing keep in the centre of the castle, there are ramparts and towers along several defensive axes built at different times and following the oval rock on which the castle of Chillon rests. From the castle or the gardens along the lake, the view of Lake Geneva and the “Dents du Midi” is beautiful.

The double fortification on the shore side with the keep on which the Swiss flag is flown.

The entrance fees to Chillon Castle are as follows:

The castle is open approximately between 10am and 6pm with seasonal variations. However, we can still strongly regret a very early closure to the visit at 6pm (!) and shops before 7pm even in the middle of summer. This clearly seems to us to be an aberration from a tourist point of view.

From the castle creation until the 15th century

A presence on the oval islet hosting the castle of Chillon is attested since 1800 BC, then in Roman times with wooden structures. The construction of the castle, whose name “Chillon” means “stone” because of the rock on which it is built, took place over centuries and probably began in the 9th century. A large part was built from the middle of the 11th century to the middle of the 12th and, in 1150, it was ceded by the Bishop of Zion to the Counts of Savoy under circumstances not elucidated by the archives.

A model of the rocky oval on which Chillon Castle is built.

The ownership of the castle allows Savoie to obtain a base for territorial conquests in the Pays de Vaud. The castle was further improved during the 13th and 14th centuries when it acquired its present appearance. In 1200, Duke Berchtold of Zähringuen besieged the castle in order to access the lake from his territory but suffered a bitter defeat. A notorious stay took place in 1442 with the antipope Felix V, also known as Amédée VIII, Duke of Savoy. The county of Savoy became a duchy in 1416.

Duke Berchtold of Zähringuen and his wife with the city of Bern at the far right with the old city crest. Source: Wikimedia Commons.

From the Burgundy Wars to “Pays de Vaud” Independence

During the Burgundian Wars from 1474 to 1477, the Bernese attacked a large number of castles in the Pays de Vaud except that of Chillon because of its defensive power, but in 1536 during the conquest of the Pays de Vaud, they besieged it with the Genevans who came with their fleet. The Château fell almost without a fight after the Savoyard castleman fled by the lake. The Pays de Vaud is a territory that occupied the current cantons of Vaud as well as the south of the canton of Fribourg.

A famous prisoner, the Geneva clergyman François Bonivard, was released on this occasion after 6 years of captivity. You can see in the basement of the castle the pillar around which it was attached. In 1803, after the independence of the Canton of Vaud and the invasion of Napoleonic troops, the castle became the property of the brand new canton of Vaud, which transformed it into a prison and arsenal.

The basement of the Chillon castle where François Bonivard was attached.

The back door, in the middle at the bottom, giving access to the lake. It is from this door that the Savoyard leaders of the castle escaped by boat in 1536.

At the end of the 19th century, restorations were undertaken under the supervision of archaeologist Pierre Naef. He had a special life as he briefly enlisted in the German Imperial Navy at the age of 17, then travelled to Europe before returning to Lausanne where he was born. For 20 years he directed the restoration work during which the moats between the castle and the shoreline were cleared after they had been filled in the past. Thanks to his work, he became a leading figure in the field of historical restoration and the demands placed on him came from Switzerland and Europe. In 1936, he was murdered by his second and young wife at the age of 75 with a revolver bullet. The opening of the castle to the public is very old and dates back to 1887, the date of the beginning of restoration.

Photo dating from around 1860-1890 with the appearance of the railway on a single track. The line will be doubled in 1900.

The infrastructures built near the Chillon castle

Curiosities near the Chillon Castle.

The Chillon fort was built in 1941 in the rock opposite the castle on the other side of the cantonal road. Its entrance is “hidden” next to the bus stop. It was decommissioned militarily in 1994. The Chillon fort was part of an outpost of the Saint-Maurice fortress whose heart was the Dailly fort and which controlled access to the Valais Alpine passes.

The entrance to the fort of Chillon “hidden” in the rock.

The station of Veytaux is built in the rock a few dozen meters from the castle of Chillon. It allows either to pump the water from Lake Geneva up into the Hongrin dam or, in the opposite direction, to turbine the water falling from the Hongrin reservoir. The Hongrin hydroelectric complex has the particularity, with the penstock connecting the Hongrin dam to the Veytaux plant, of changing the natural flow of water from the North Sea catchment area to the Mediterranean.

The administrative buildings under which one passes to enter the tunnel leading to the Veytaux power plant.

The double vault of the Hongrin dam.

The viaduct was built between 1966 and 1969 just above Chillon Castle. It has pillars nearly 50 metres high. An article in the 24 Heures newspaper offers some photos of its construction. At the time, the viaduct was preferred to a tunnel for financial reasons.

The motorway viaduct above the castle.

The very pretty and bucolic little beach of Chillon is located a few meters from the castle towards Montreux. Space is available for barbecues.

The beach of Chillon Castle.

The Chillon landing stage of the Compagnie Générale de Navigation (CGN) allows you to come to the castle in an original way. The “Riviera Tour” allows you to travel by boat in the form of a loop through the ports of Vevey Marché, Vevey La Tour, Clarens, Montreux, Territet, Château de Chillon, Villeneuve, Le Bouveret, Saint-Gingolf and back to Vevey by crossing the lake.

A CGN boat goes to the port of Chillon Castle. 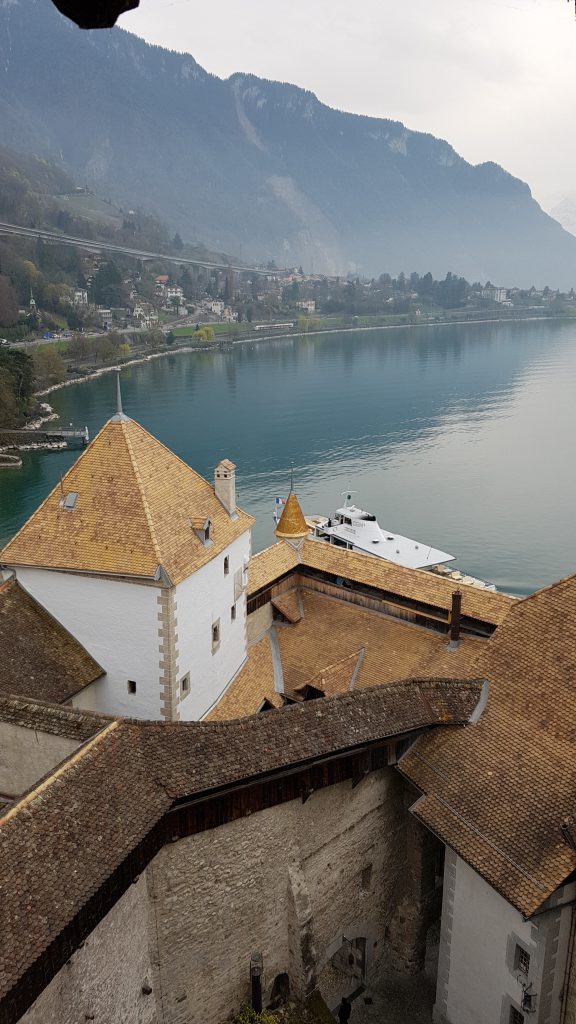 The Chillon castle, a source of inspiration

Chillon Castle is one of the symbols of Switzerland and has inspired many artistic creations. For example, an old animated metal model at the Cantonal Museum of Archaeology and History of the Palais de Rumine in Lausanne or a painting by Gustave Courbet.

An animated model of Chillon Castle.

An oil on canvas exhibited at the Belfort Museum of Fine Arts painted by Gustave Courbet in the 19th century.

A drone video on the Chillon Castle.

A video on the castle.