The Christ the King Statue (Statue du Christ-Roi in french) is a statue representing Christ at the top of the Châtelard hill in the commune of Lens. It overlooks the Rhône Valley at the centre of the Valais.

The Christ the King Statue on its pedestal. 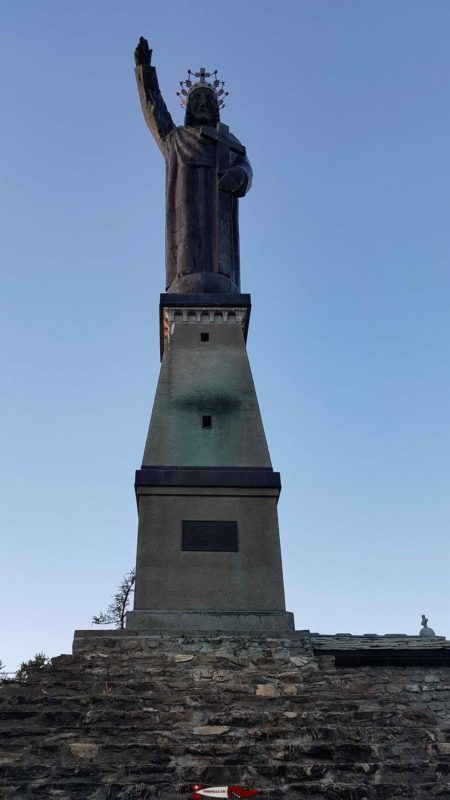 Parking is available below the top of the hill. 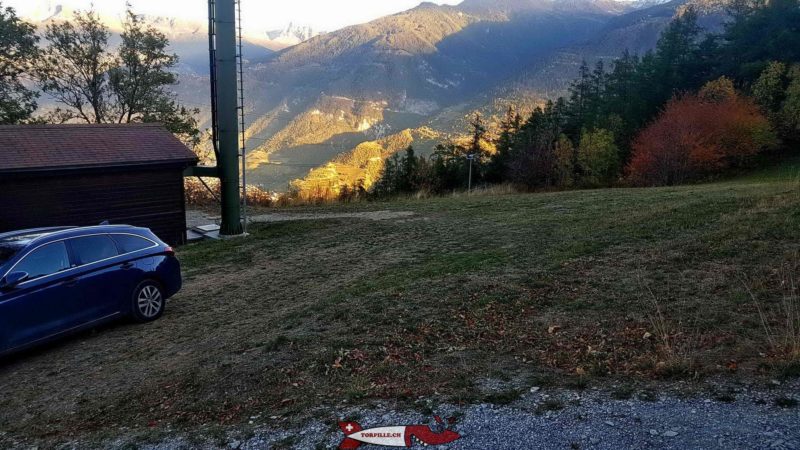 To climb up to the esplanade of the Christ the King Statue on which the statue is built, one first follows a path that leads to a forest of pines and larches.

The beginning of the ascent from the car park. 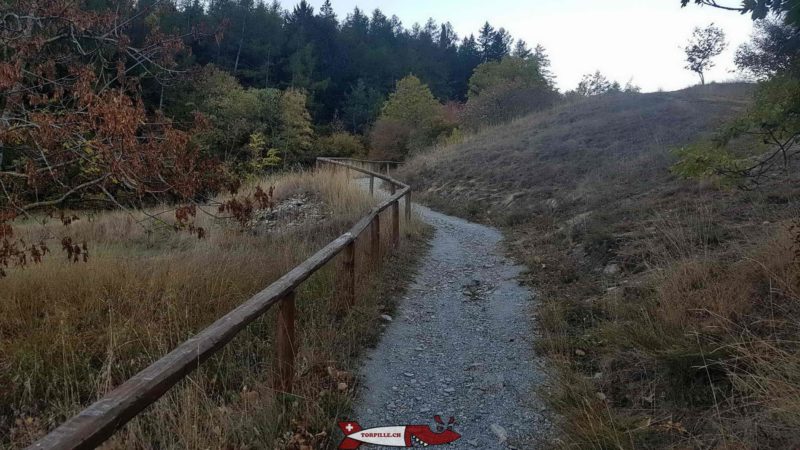 The entrance in the forest. 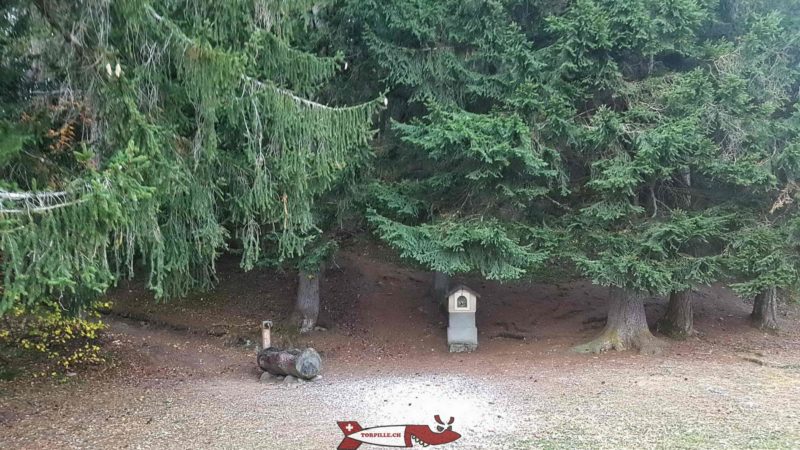 Two paths are then available:

On the right, a gravel path following the Way of the Cross and its 14 stations built in 1933. It climbs steeply directly to the top.

The arrival at the statue from the east flank and the 14th and last station of the Way of the Cross on the esplanade of the Christ the King Statue. 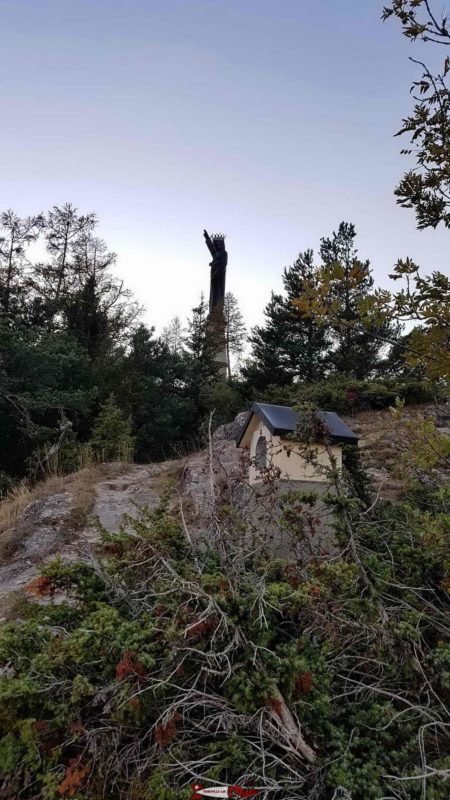 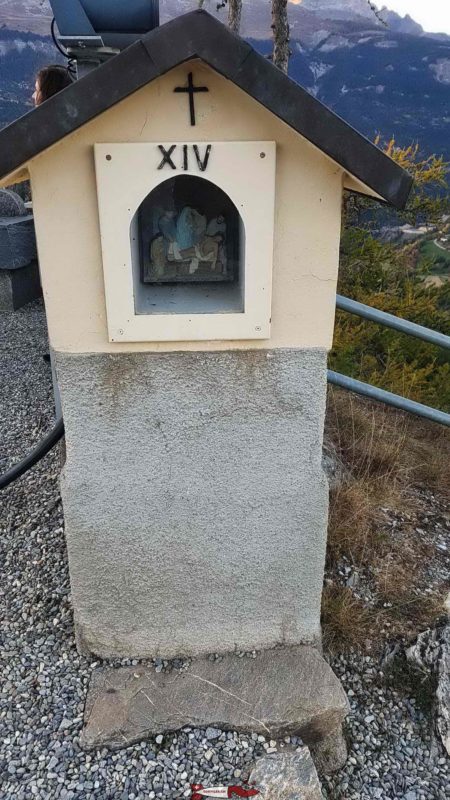 Path along the mountain

On the left, a less steep path on a forest floor that runs around the hill from the south. We pass through an open-air oratory dedicated to Our Lady of Lourdes.
The path through the forest. 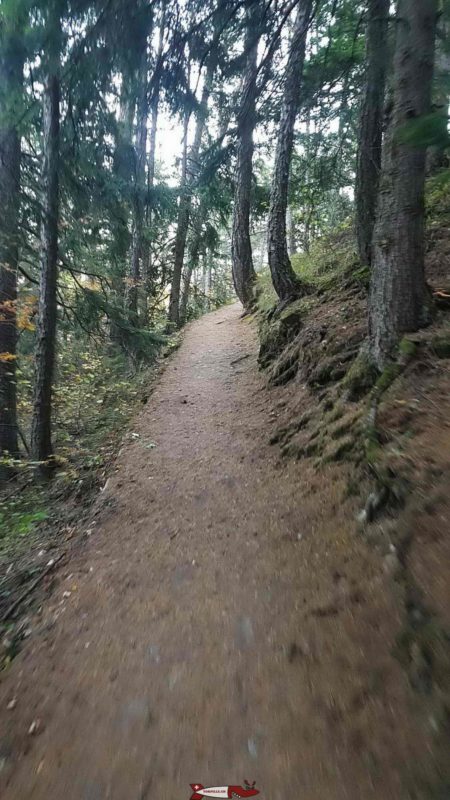 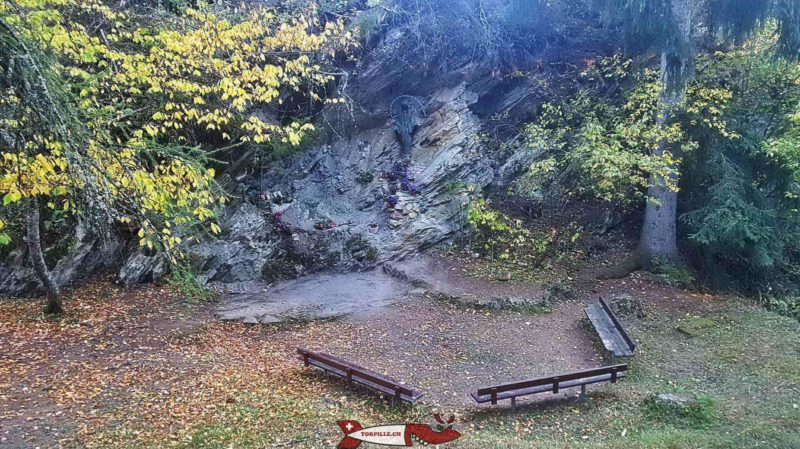 The arrival at the statue from the west. 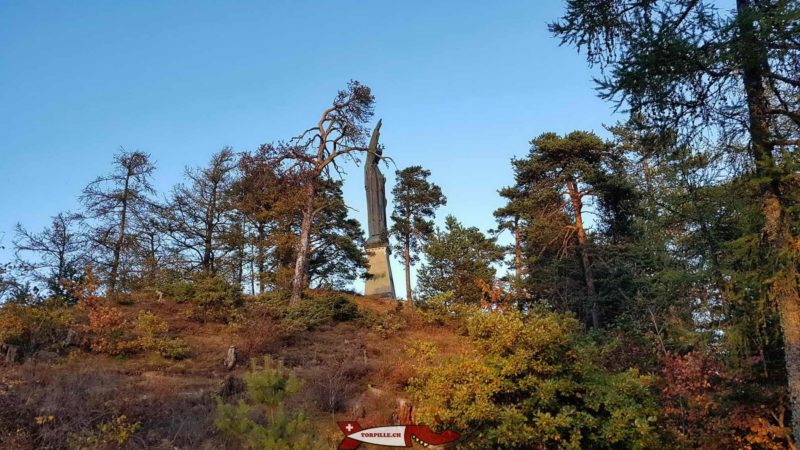 The ascent to the statue from the car park takes 15 to 20 minutes and about 30 minutes from the village of Lens.

The statue is built in 1935 to celebrate the 1900th anniversary of Christ’s death. It is 30 metres high, half of which is made up of the pedestal. The Christ the King Statue is made of brass plates and a metal frame, while Christ’s head is decorated with stones of different colours.

A chapel is built under the statue. You can see its porch decorated by local saints as well as by the shields of the Valais districts. The porch is covered with slate and a granite cross.

The porch of the chapel. 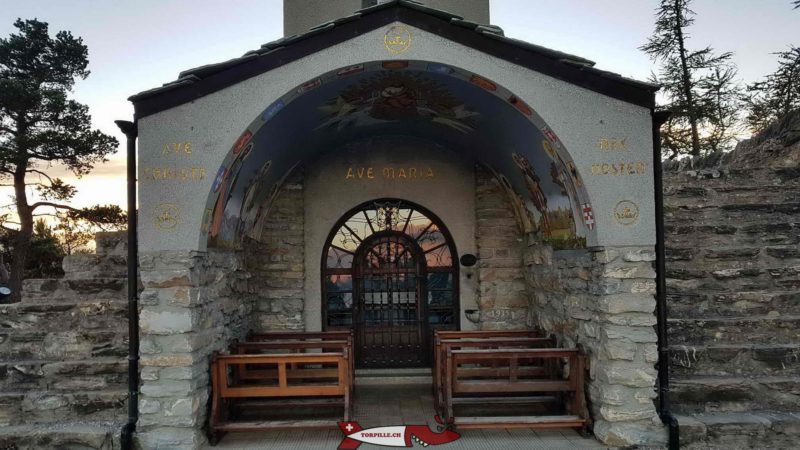 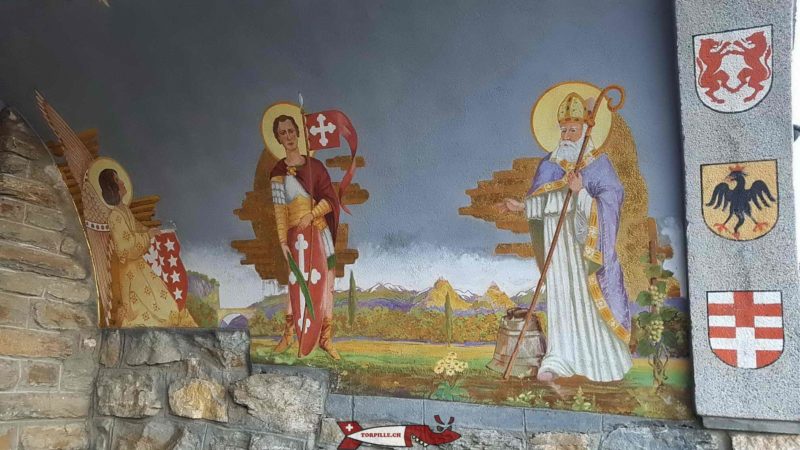 The roof of the porch. 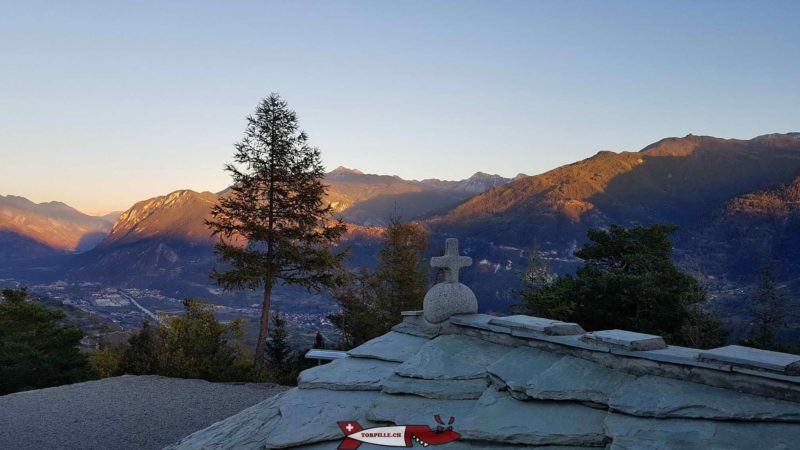 It is not possible to visit the inside of the statue, only the maintenance service can climb inside it to the top.

A complete document relates the history of the construction of the Statue of Christ the King of Lens.

Located at an altitude of 1272 metres, the esplanade of the Christ the King statue has two beautiful views over the Rhone Valley. 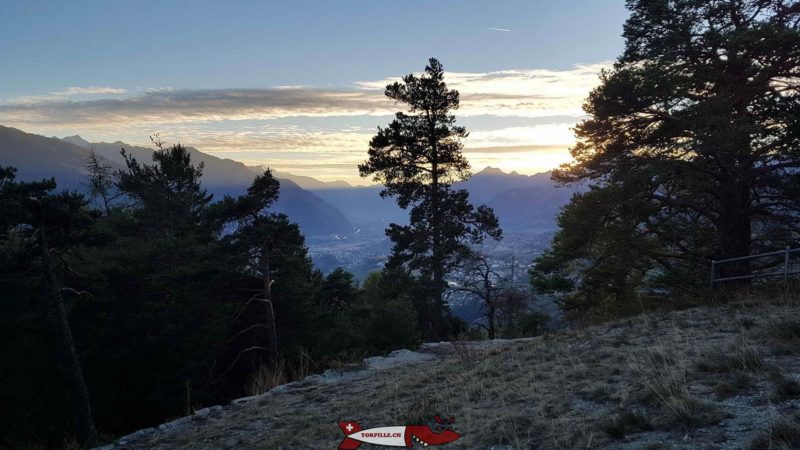 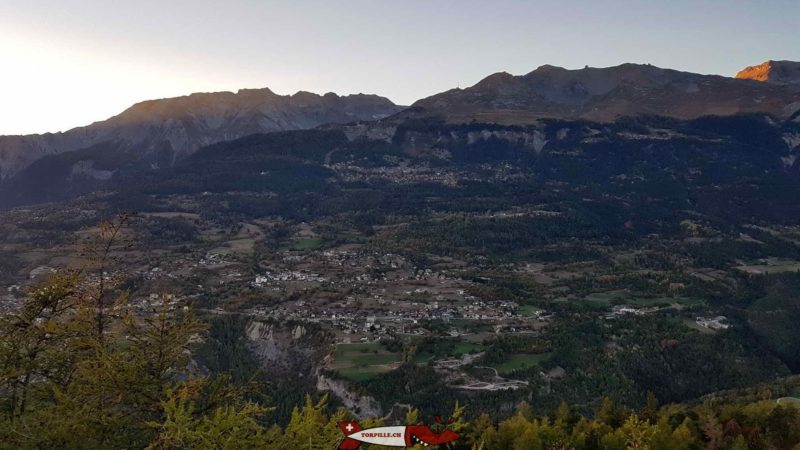 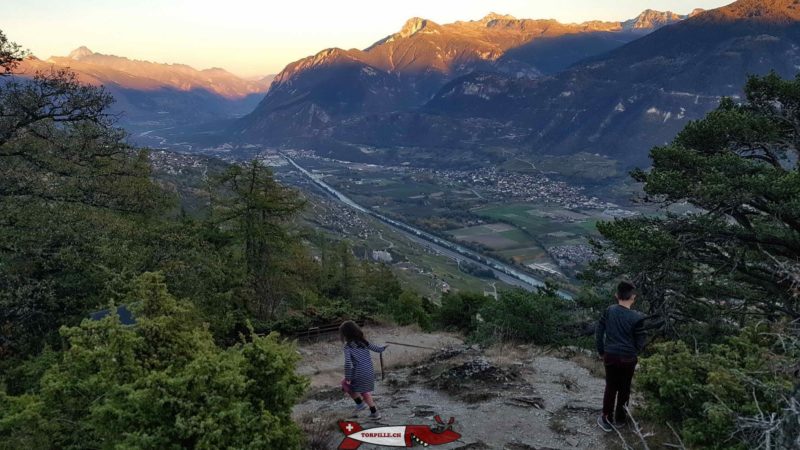 Other statues of Christ in the World

The statue of Christ the King of Lens is the only permanent statue of Christ in Switzerland. In 2018, on the occasion of the 200th anniversary of the foundation of Nova Friburgo in Brazil by emigrants from Fribourg, the Edelweiss airline company is having a temporary replica of Christ the Redeemer of Rio built on Boulevard de Pérolles.

Christ the Redeemer on the Boulevard de Pérolles. Photo: cath.ch 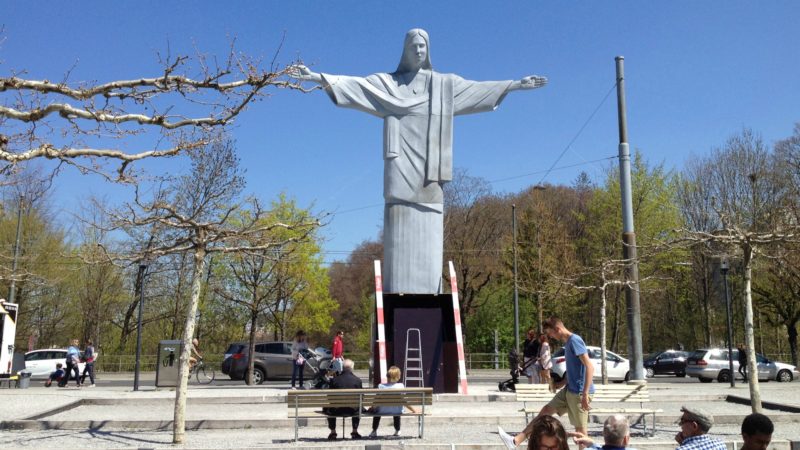 There are many statues of Christ in the world, the highest of which are between 30 and 40 metres high. Below are some examples of the most impressive statues.

Christ the Redeemer at the top of the Corcovado hill. 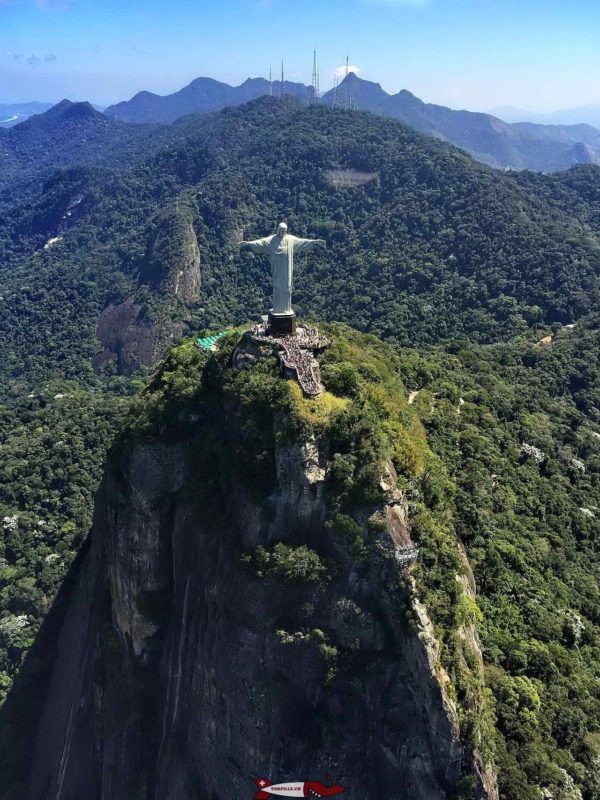 A drone video around the site of the Christ the King statue.