The Evionnaz fort is a military construction located south of the Saint-Maurice fortress. Disused militarily in the 1990s and acquired by the Proforteresse association in 2001, its function was to prevent the passage of military elements up the Rhône Valley to Saint-Maurice. It is made up of 4 levels, the first 2 of which contain the battle stations. Only the first level at the entrance and a small part of the second level can be visited. The 3rd and 4th floors are much smaller and are used by powerful projectors, infrared detectors or observation posts.

A diagram of the fort exposed inside it.

Small car park at approximately 300 meters from the Evionnaz fort.

Visiting periods take place on certain days in July and August. Please check the schedule on the Proforteresse website.

The entrance to the fort is located at the village of Evionnaz, where a former military truck is parked against the rock face. It is the only fort where the visit is not guided and can be done freely. It is not possible in this fort to approach the guns or machine guns as well as to see the various parts dedicated to the functioning of the fort. So it’s more like a museum. Details on the latter can be found in the next section. We will not fail to remind you to bring a sweater because of the temperature of about 8 degrees in the fort.

The entrance with the military truck. 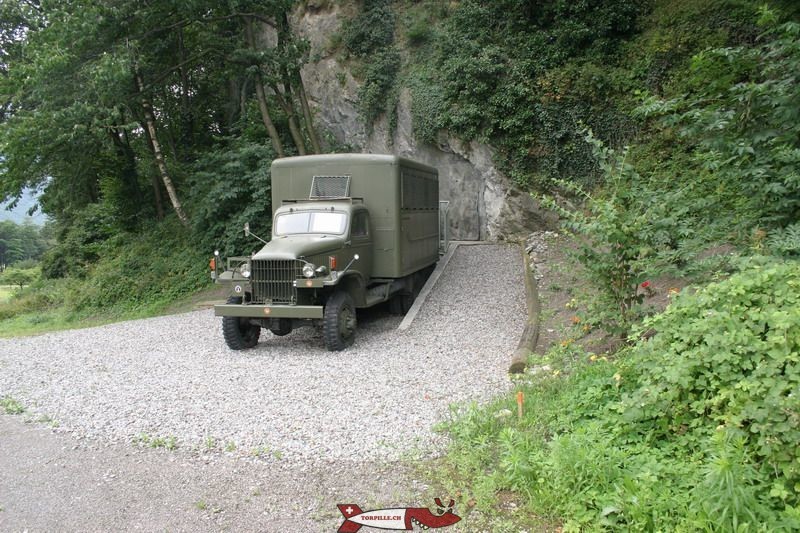 Many rather well-designed information panels are located mainly in the main gallery on the ground floor of the fort and relate the military history and particularly the history of the forts. The themes addressed are as follows:

The long corridor in the fort.

Armament of the fort

Built in 1939, the fort of Evionnaz is an anti-tank type fort with 2 4.7 cm anti-tank guns updated in 9 cm in the 1970s and 2 machine guns. Anti-tank barriers, still well visible today and called “toblerones” because of their similarity with the famous chocolate or drageon teeths, were placed on the ground to complicate access to military vehicles and thus facilitate their destruction by the Evionnaz fort.

A panel exposed in the fort about the Evionnaz anti-tank line.

The fortress of Saint-Maurice was one of the three pillars of the National Redoubt during the Second World War and the Cold War with the military fortresses of Sargans and Gotthard. This retreat system would have allowed the Swiss army to resist in fortifications in the Alps. The fortress of Saint-Maurice was made up of the forts of Dailly, which is the largest fort in Europe with its more than 20 km of tunnels, Savatan, Scex and Cindey. These last two forts are located in front of the first two in order to defend them in case of an attack.

An information panel about the fortress of Saint-Maurice displayed at Fort Cindey.

All the military forts have been disused in French-speaking Switzerland. A good part of these forts are open to the public but only 5 without reservations.

The first three, listed in order of preference ba the Torpille team, are clearly those that should be visited first because they have been kept as they were at the time of their occupation by the military troop. Fort Champex-Lac no longer has its original cannons and is less well preserved, and the Evionnaz fort is more like visiting a museum on military history.