The Gorges of Durnand are undoubtedly among the most beautiful gorges in French-speaking or Western Switzerland. It is located in the commune of Bovernier above Martigny along the road leading to the Great St. Bernard.

Like the other gorges in the nearby Trient Valley, the Durnand Gorges were opened at the end of the 19th century in 1877 and renovated in 1987. Everything is well maintained, but it is better to have good shoes and to hold small children by the hand.

The Durnand gorges with the impressive footbridges over the void.

The gorges are in the terminal part of the Durnand River. The latter has its source in the Val d’Arpette and flows into the Dranse shortly after the gorges.

The bubbling waters of the Durnand d’Arpette a few kilometres upstream of the gorges. 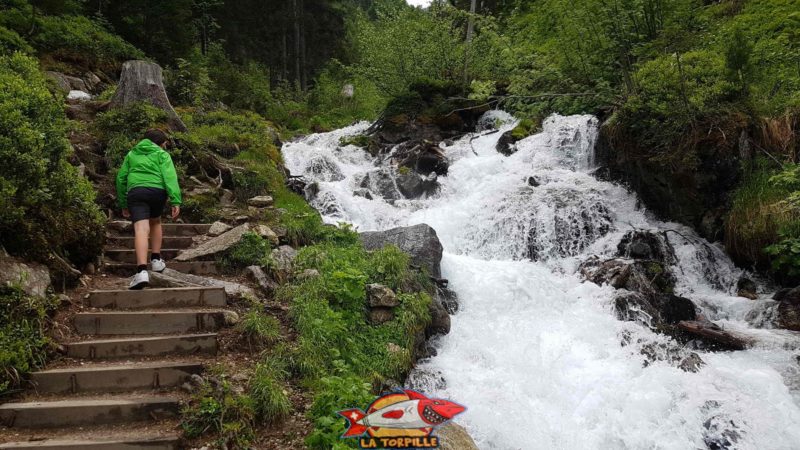 The Durnand Gorges are the only gorges with the Trient Gorges to be paid for. The entrance is bought at the reception level of the Durnand Gorges restaurant, which unlocks the access door. The course is open from the beginning of May to the end of October and the prices are as follows:

The access door to the gorges next to the restaurant.

The course consists of a loop.

The first part of the course with the wooden footbridges.

The second part of the course with the trail in the forest.

Both parts of the trail take about 25 minutes of walking each for a total time of just under an hour.

A must to visit

The Durnand gorges are particularly impressive with their 14 waterfalls and their glacial potholes dug into the rock by the bubbling water. They are, together with those of the Trient, the most beautiful in French-speaking Switzerland. La Torpille recommends this visit!

The glacial potholes dug by the friction of small stones and the force of the water.

A video on the Durnand Gorges.

A video on the Durnand Gorges.