The Grande Dixence dam (Barrage de la Grande Dixence in french) is the King of the Swiss dams. It impresses by its imposing stature and the phenomenal quantity of concrete that it is made of. The infrastructure that is linked to it such as water supply tunnels, penstocks or power plants is also very impressive. Together with the Matterhorn in Zermatt, the Kappelbrücke in Lucerne or the Chillon Castle in Montreux, it is one of Switzerland’s most important figures. However, it is a relatively unknown monument that is absolutely worth visiting. 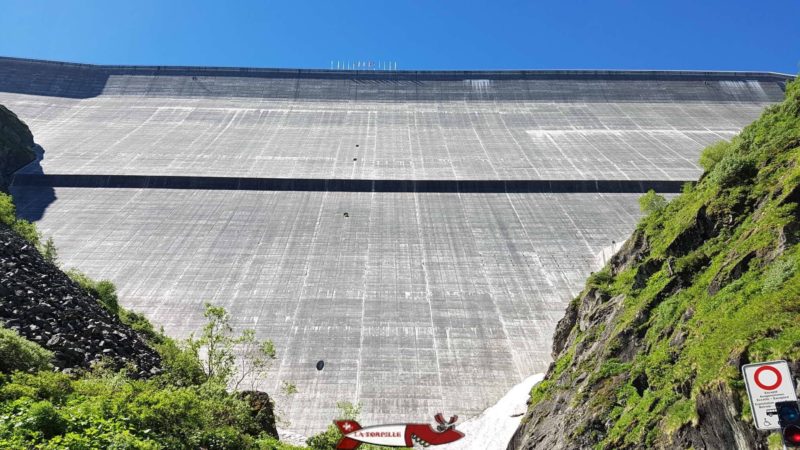 When you arrive at the roundabout under the Grande Dixence dam after the small tunnel, several car parks are available:

The parking under the dam. 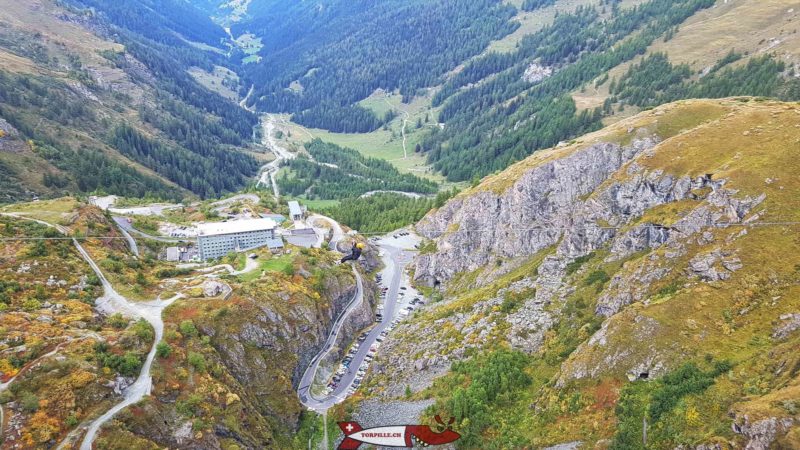 The dam is served in summer from Sion by Theytaz buses.

The reception area includes 6 buildings below the dam in the “Chargeur” area.

This is the old residence used by the workers who built the Grande Dixence dam in the 1950s. It is now recycled into a 60-room hotel at a price of about 70 to 130 francs per person per night and a restaurant with a dining room for about 70 people. 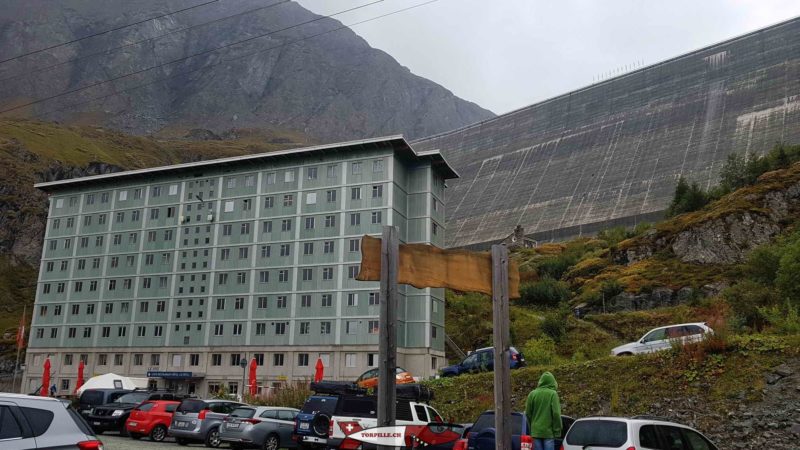 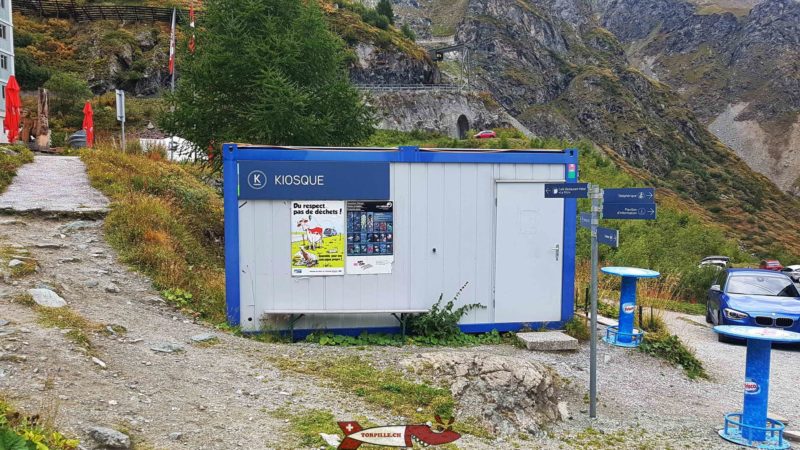 Offers for free a small exhibition showing objects used for the construction of the Grande Dixence dam, some information panels and a historic film by Jean-Luc Godard “Opération Béton”. You can also see this 16-minute film on Youtube but with very poor sound quality. 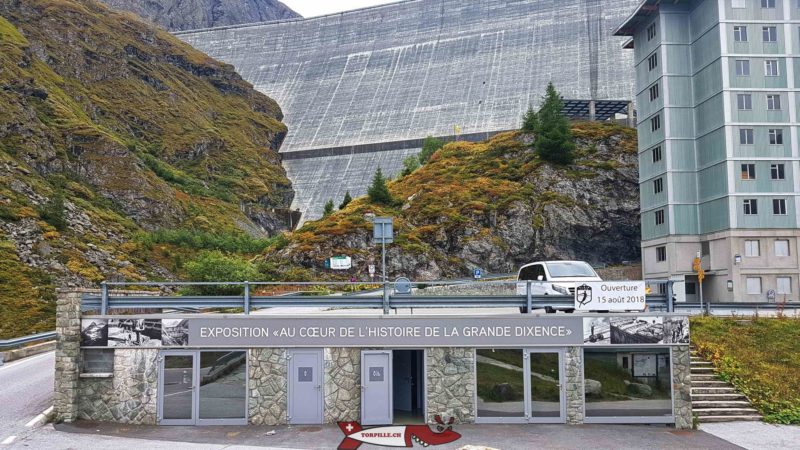 Lower station of the cable car

Allows you to reach the top of the Grande Dixence dam without effort. See the dam -> cable car section for more information. 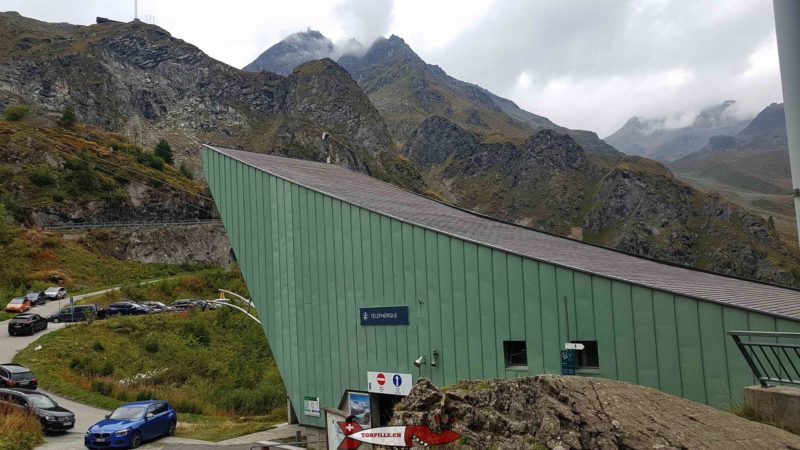 Next to the outdoor tables of the dam hotel is a beautiful picnic area with tables, chairs and parasols. 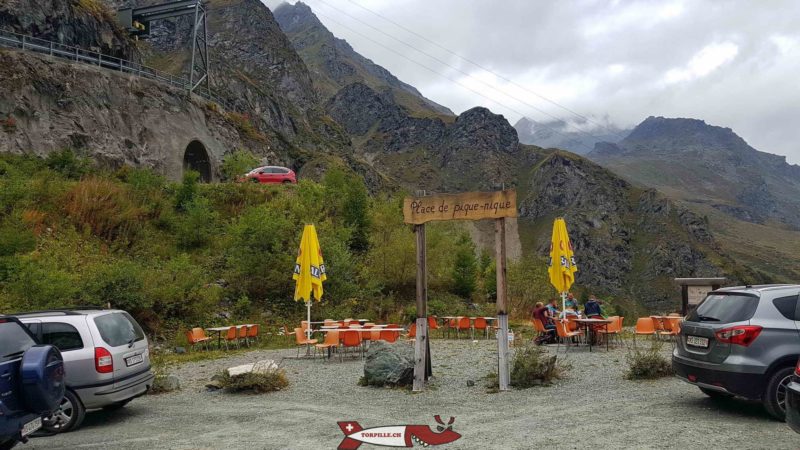 The visit lasts between 1 hour and 1 hour and a quarter and takes place at least 4 times a day at 11:30, 13:30, 15:00 and 16:30. The meeting point at the beginning of the visit is the reception desk. Grande Dixence is the only dam where there is no need to make an appointment for the visit, however, we recommend that you book if you are a group of more than 10 people. And finally, don’t forget a good sweater since the temperature in the dam is 6 degrees.

The guided tour begins with a walk up to the Saint John chapel (chapelle Saint-Jean in french) built for the workers in the early 1950s. 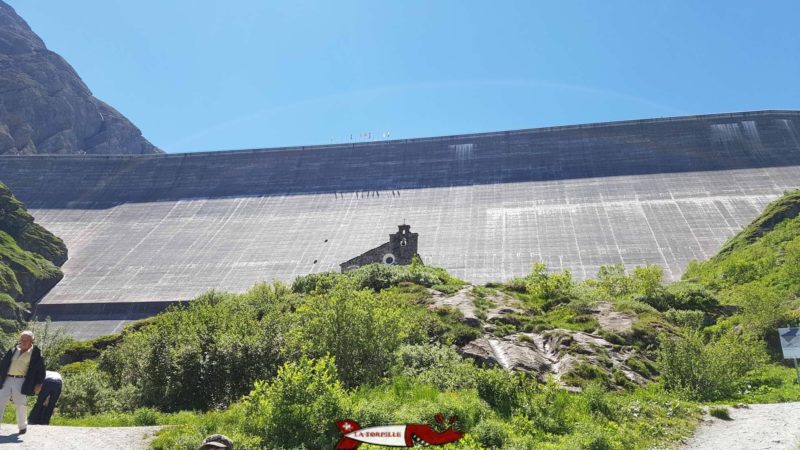 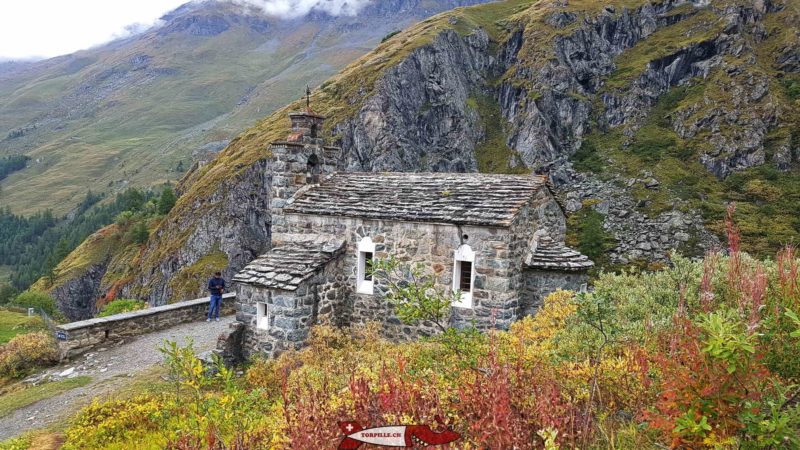 We continue to climb up to an underground gallery allowing the penstock to be routed to the Bieudron power plant with its butterfly valve to block the pipe with a rotating disc. The gallery displays information panels on the dam and are commented on by the guide. 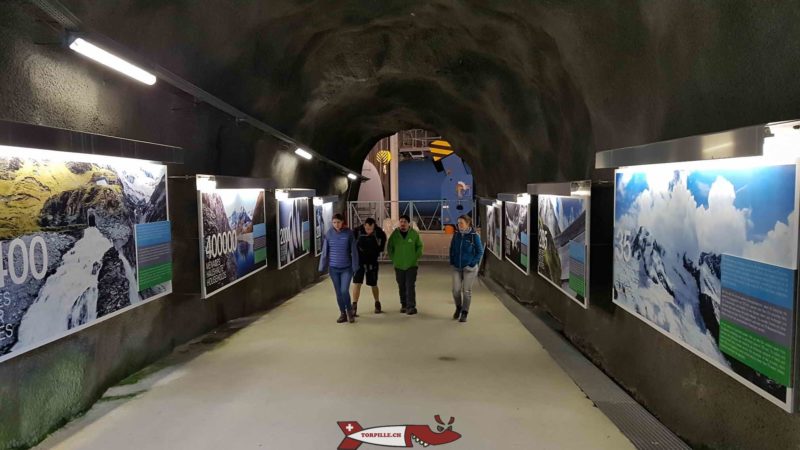 Galleries of the Grande Dixence dam

You then enter directly into the dam by a metal staircase to walk through narrow galleries lit by lights of different colours and against which are projected some key figures of the dam. 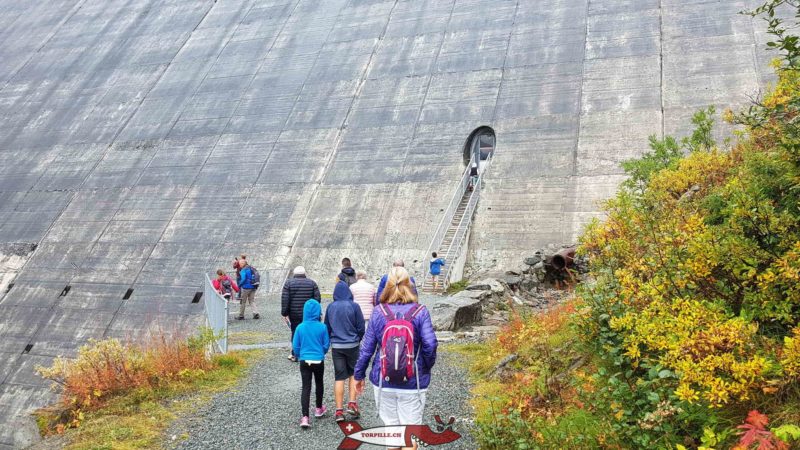 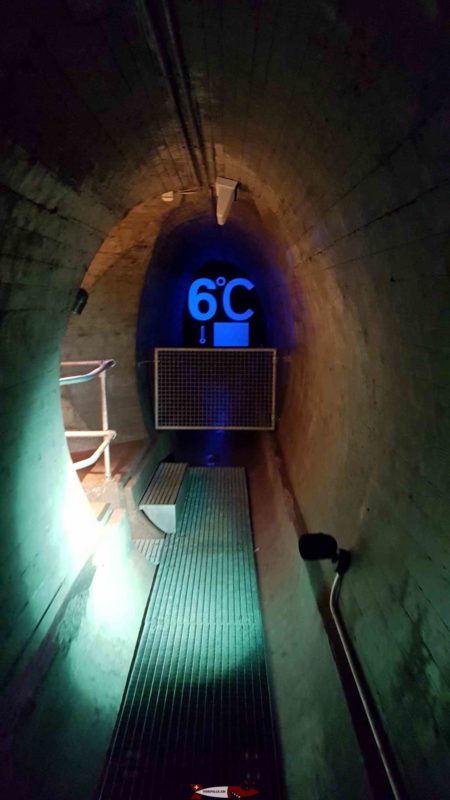 Then, we take a very steep staircase with steps 50 centimetres high to find ourselves in the inside of the rock next to the dam. As the stairs are climbed, streams of water can be seen flowing into the dam due to the completely controlled infiltration of water between the rock and the concrete of the dam. 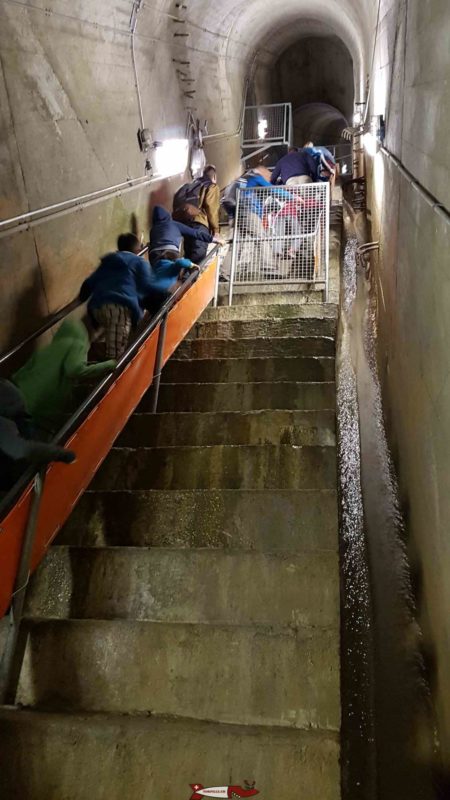 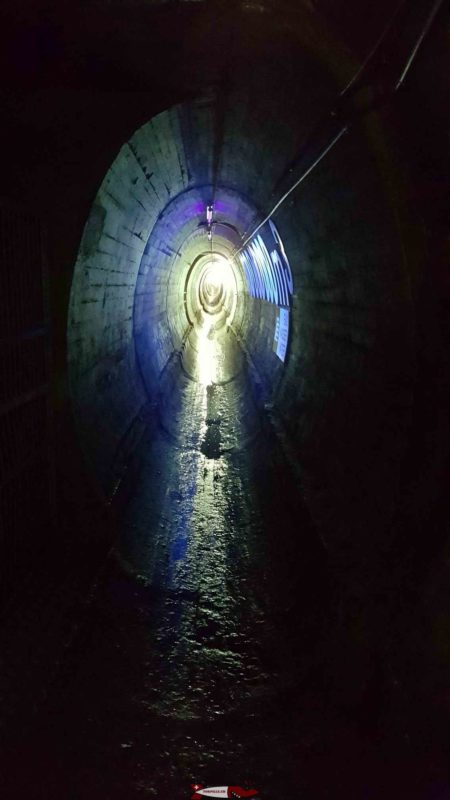 Once in a space in the rock, an extract from the film “Opération Béton” is projected. It has been modified by integrating the key figures of the dams. 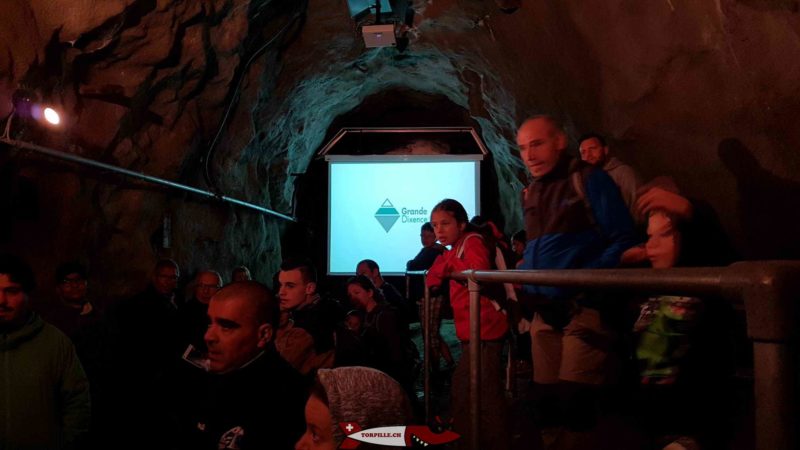 In the gallery following the screening of the film, there are aerial views of all the reservoirs of the immense complex of the Grande Dixence with its dams and pumping stations. See the section below “power plants”. 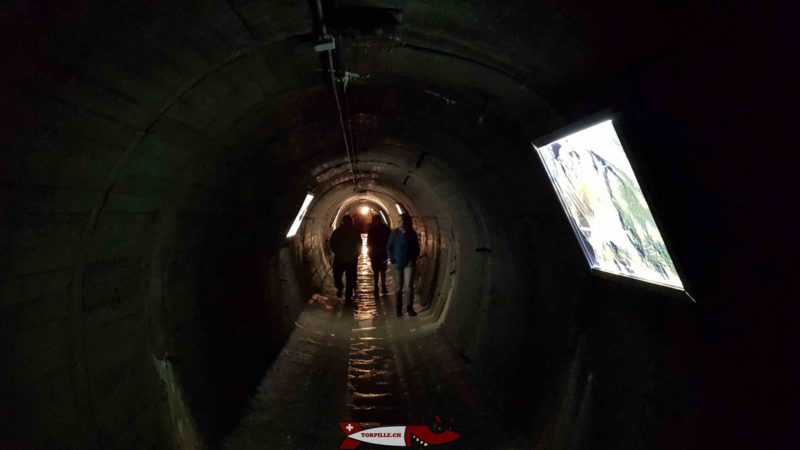 It presents various aspects related to power consumption and production in a narrow gallery just before the exit. 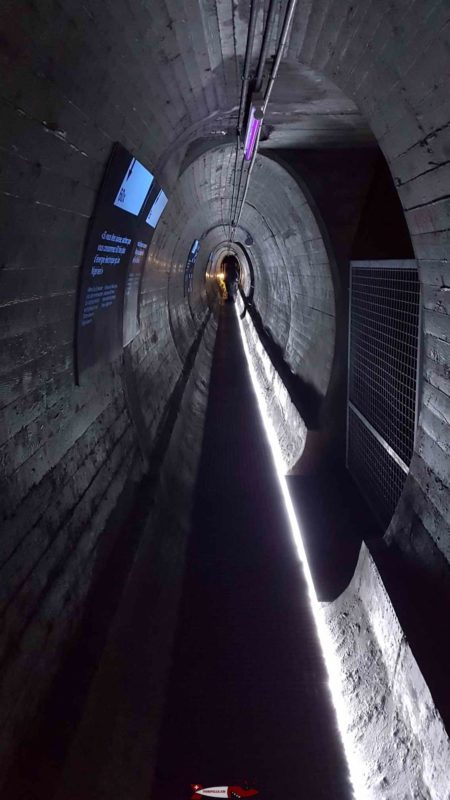 The top of the dam

Open from mid-June to mid-October, it connects the reception area (2175 metres) to the top of the Grande Dixence dam (2375 metres). It is 640 metres long and the ride takes 4 minutes. 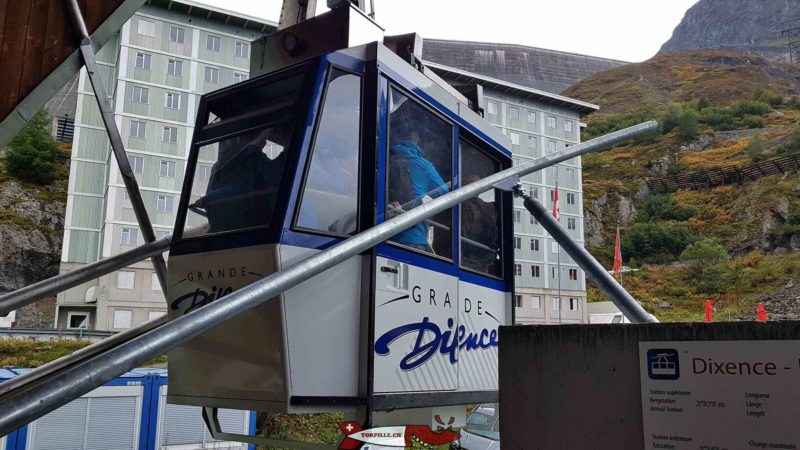 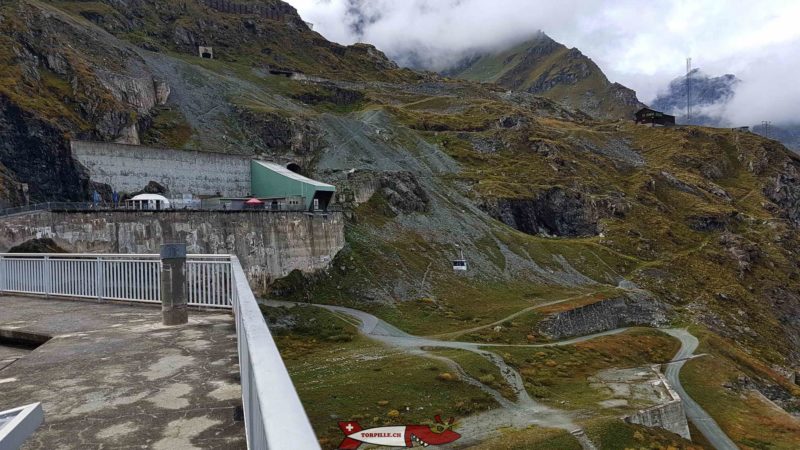 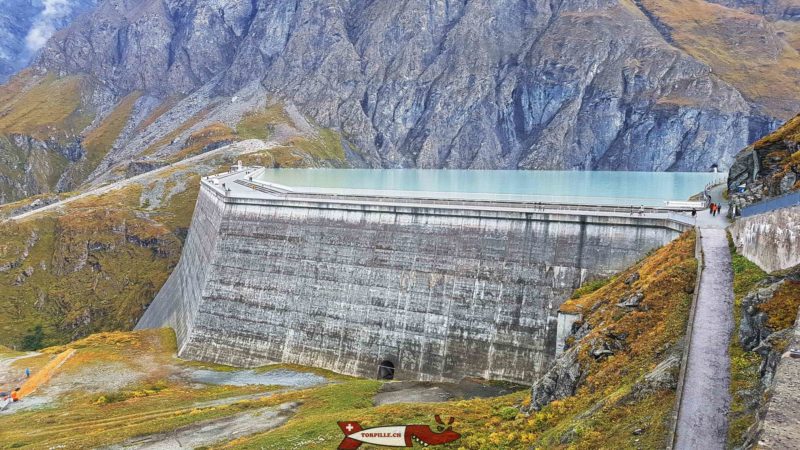 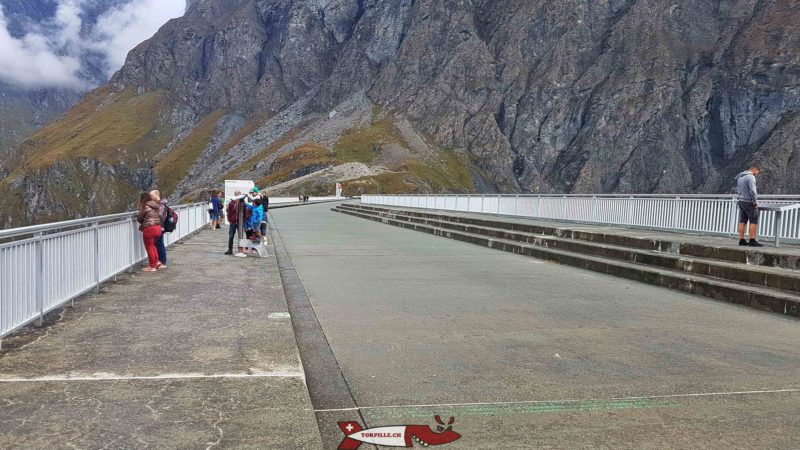 Allows you to observe the Dix Lake (Lac des Dix in french) with the mountains surrounding it and on the other side the Val d’Hérémance. 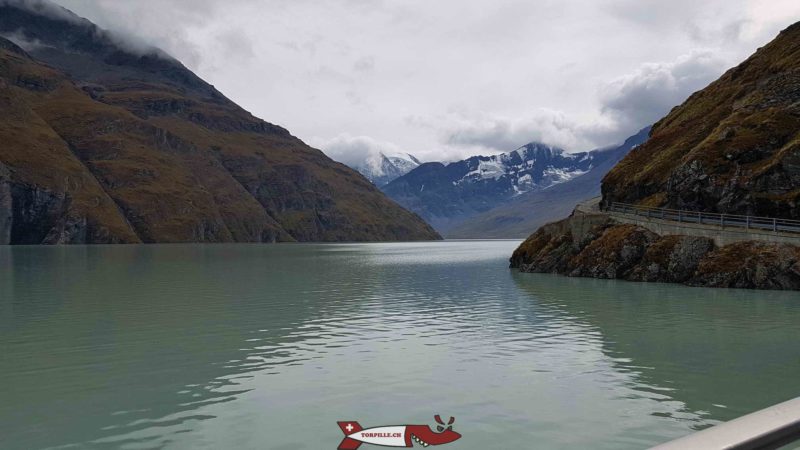 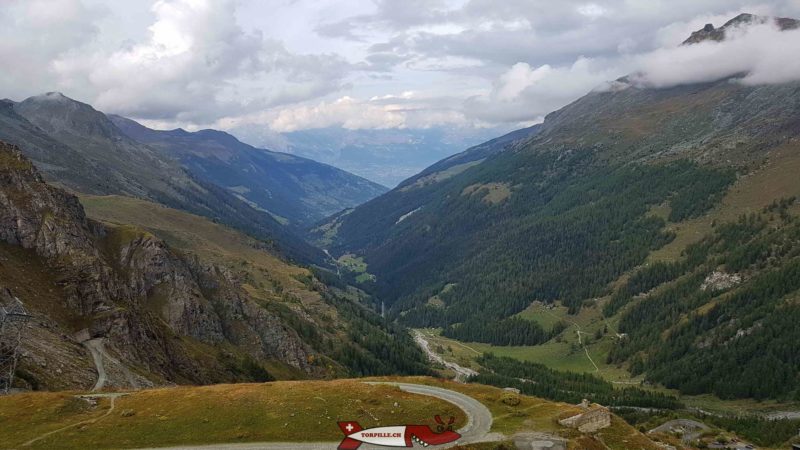 Proposes some snacks and drinks next to the upper station of the cable car. 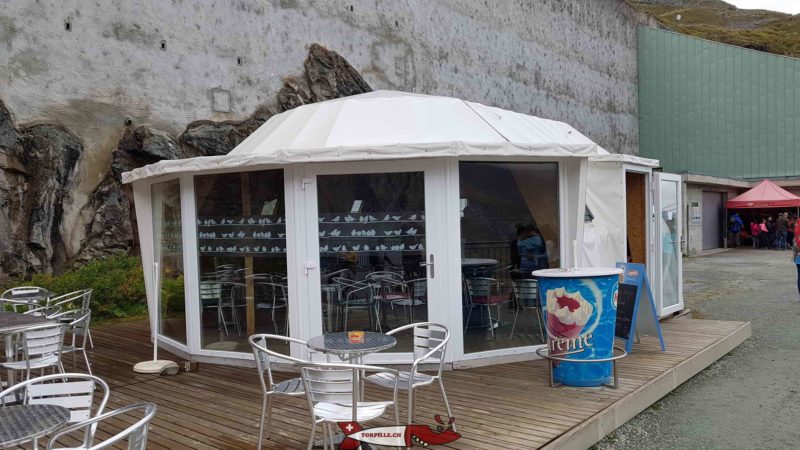 700 metres long, it is the longest in Switzerland. It starts from the top of the dam at the end opposite the cable car station and runs along the wall of the Grande Dixence dam downstream and ends under the cable car wires at mid-course. 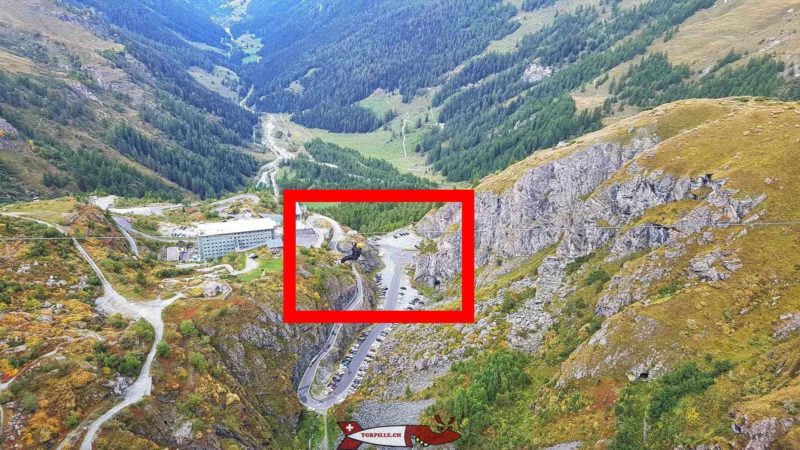 Magnificent loop around Mont Blava lasting 4 hours with 780 metres of positive altitude difference and 11 kilometres in length. The trail starts from the cable car station and begins along the west side of the lake towards the bottom of the Val des Dix. It climbs to the Col des Roux, passes through the Pra-Fleuri hut and finally returns to the cable car.

A signpost at the beginning of the ibex path (sentier des bouquetins) and the route drawn on a map. 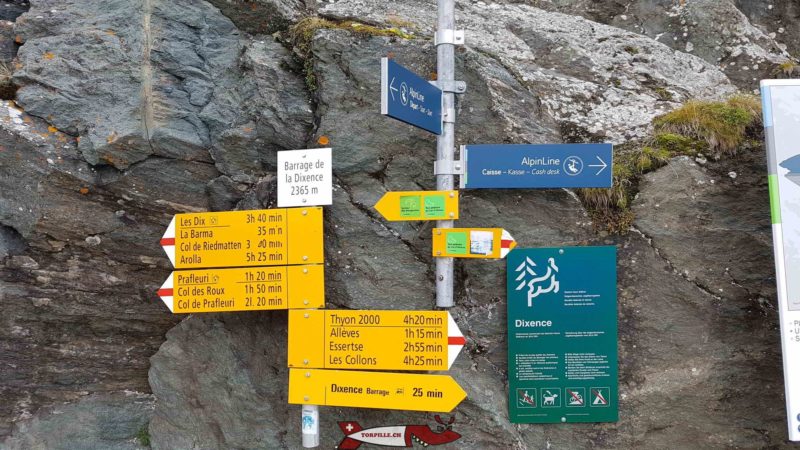 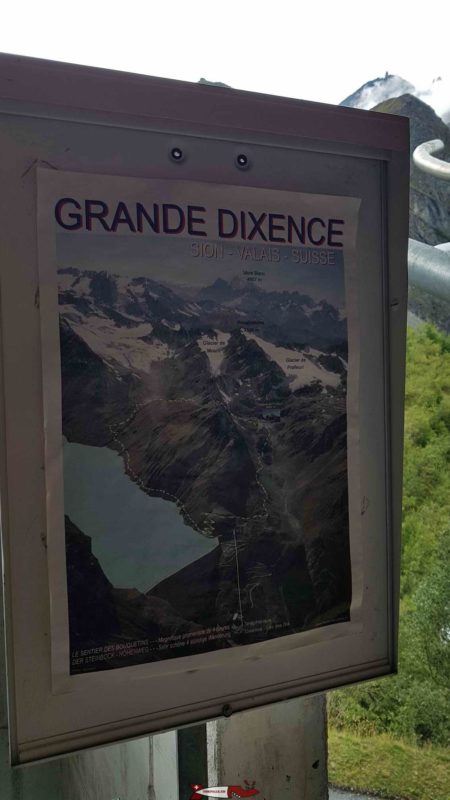 The Grande Dixence Dam is located at the bottom of the Heremance valley, a side valley near Sion in the Valais. It is the successor to the Dixence dam, built slightly upstream and commissioned in 1935. When the water retention that forms Lac des Dix is low, the old dam is visible as in this picture of notrehistoire.ch.

The Dixence dam had an arched shape but not its characteristics such as Mauvoisin, Emosson or Monstalvens dams. The dixence dam is a gravity or weight dam. It has the following remarkable characteristics:

The Grande-Dixence construction project began in 1942 and lasted from 1953 to 1961. In 1968 all the infrastructure for maximum production was built. About 3000 workers work on the dams from the surrounding valleys, from other Swiss cantons and also from Italy. The latter often worked in precarious and even undeclared conditions, to such an extent that the exact number of deaths during construction is unknown. All the cement factories in Switzerland worked for the dam, the rock needed for the concrete is taken on site. A cable car brings the cement from the plain to the dam. It was dismantled after the dam was built.

The road leading from Sion to the dam runs through the Val d’Hérens, then the Val d’Heremance by a road in very good state. The construction of the dam and related infrastructure opened up the valleys around the Val d’Hérens to the outside world.

The Grande Dixence dam is a “weight” type dam where the dam alone opposes the force of water, it is the highest in the world in its category and has remained for many years the highest in the world in all categories. It is all the more remarkable because it was built in the 1950s, unlike its world homologues, which were often built after the 2000s and therefore with much more advanced technological means. Here are some key figures for the Grande Dixence dam: (See all the details)

The two largest dams in Switzerland, the Grande Dixence dam of the “weight” type and the Mauvoisin dam of the “arch” type. 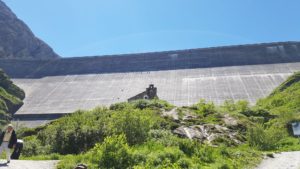 The Grande Dixence dam is located at a high altitude, 2360 for its crowning, which has the disadvantage of severely limiting its natural catchment area. To fill the huge Lake des Dix reservoir and its 400 million m3, the watershed is extended to a huge area of 400km2 thanks to a network of collectors unique in the world.

The water is pumped to the bottom of the valleys as far as Zermatt by 4 pumping stations that pump the water into the main collector of Grande Dixence, which runs from Zermatt to the gently sloping Lake des Dix. A vehicle can drive through this 40km long collector and in winter no water flows through it due to the absence of snowmelt. The 4 pumping stations are Z’mutt, Stafel located at the end of the Mattertal after Zermatt and Ferpècle and Arolla at the end of the Val d’Hérens. The total water pumped in summer is 350million m3 of water while the total of the water supply tunnels to Lake Dix reaches 100km collecting water from 35 glaciers for 75 water intakes. It should be noted that the Z’mutt pumping station consists of a 74-metre high dam.

Another dam, at the northwest, the Cleuson dam, holds 20 million m3 of water. The water from the dam is pumped into the Grande-Dixence dam. The Cleuson dam is located at the end of the Nendaz valley at the foot of Mont-Fort and Mont-Gelé.

The water from the Grande Dixence dam in Lake des Dix is at its lowest in April when it reaches less than 10% of its maximum volume and generally at its highest in September. A webcam provides a view of the dam and interesting real-time statistics on the volume of the reservoir and the flow rate of the main collector.

The waters of the Grande Dixence dam are turbined by 3 downstream plants in order to take advantage of the speed of the water. The Chandoline plant, which received water directly from the dam in the 1930s, was decommissioned in 2013.

The Chandoline plant with its penstocks. 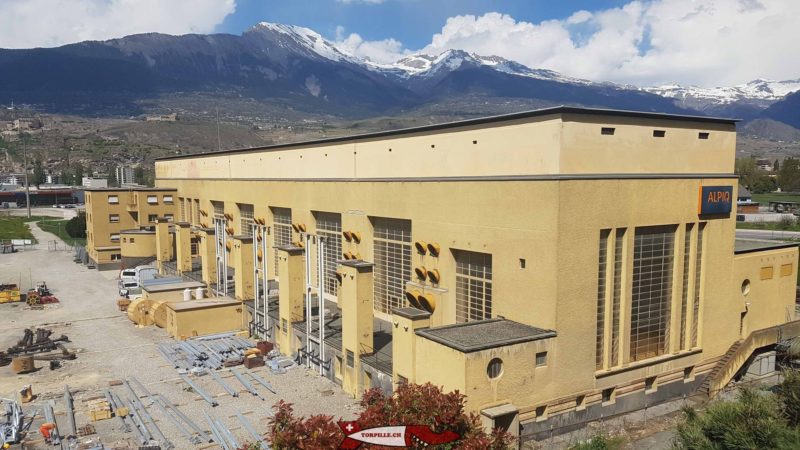 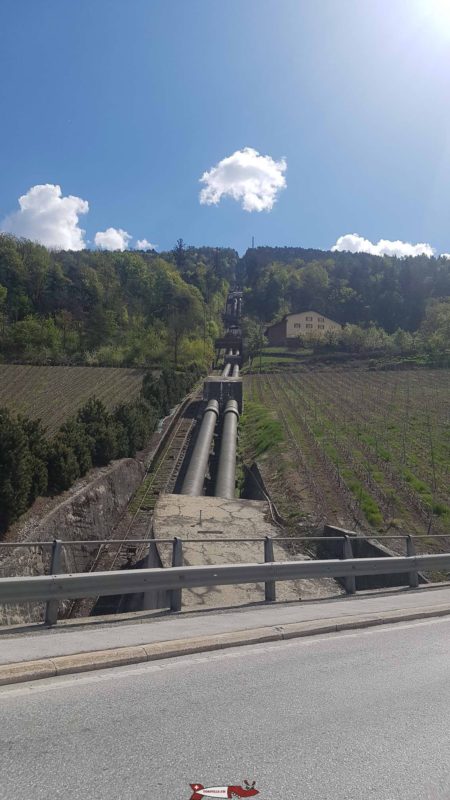 A view of the penstock leading to the Chandoline factory from the hill of the Tourbillon Castle in Sion.

Service building and departure of power lines from the Fionnay underground plant.

Fionnay compensation basin. The water from the Drance flows into the basin formed by a 20-metre concrete dam.
Picture to add

It should be noted that the official Grande Dixence Website offers a remarkable informations about the dam and its infrastructures.

The headquarters of Grande Dixence SA next to Sion station. The main shareholder of this company is EOS.

On December 12, 2000, the steel of the underground pipe leading to the Bieudron plant was torn and released the water on the side of the mountain leading to the Rhône. The amount of soil and rock carried away by the waters is such that it obstructs the flow of the Rhone. In 2010, the pipe is repaired and the plant is back in service. It took 10 years for the problem to be solved and corrected. A YouTube video shows the repair operations.

See all the technical details of the dam.

The “Operation Beton” film made by Godard.

A drone video on the dam.

A video inside the Grande Dixence Dam.

Attractions in the canton of Valais
Attraction in the Hérens Region