The history of science museum Geneva (Musée d’histoire des Sciences de Genève in french) is a museum that presents, in the form of a permanent exhibition, 800 scientific instruments, notably from Geneva scientists from the 17th to 19th centuries, which were used to improve knowledge in many fields of science. Temporary exhibitions renewed each year and accessible to children enrich the museum.

The museum from the road side.

The museum from the Lake Geneva side.

The history of science museum is located in the “Parc de la Perle du Lac” on the shores of Lake Geneva. It occupies a pretty house dating from 1830 called the “Villa Bartholoni”. François Bartholoni was born in Geneva and was one of the pioneers in the development of railways in France during the 19th century.

The view from the museum’s terrace overlooking the lake and the French Alps with Mont-Blanc.

Parking along the road next to the museum. 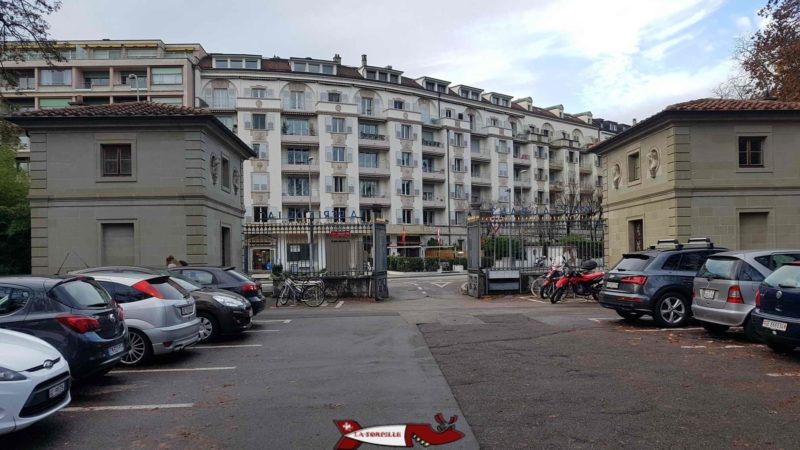 The history of science museum is free of charge like all the other museums in the city of Geneva in public hands, such as the magnificent Museum of Natural History.

The museum has two floors, themselves divided into several rooms:

The reception at the entrance of the museum.

Horace Bénédict de Saussure is an 18th century Geneva personality. Physicist, geologist and botanist, he is considered as one of the founders of mountaineering. He was one of the first to reach the summit of Mont-Blanc and conducted scientific experiments there, such as measuring the height of Mont-Blanc with an accuracy of 30 metres.

The Colladon space is dedicated to Jean-Daniel Colladon, a 19th century physicist from Geneva. He is known for his work on liquid compressibility and his measurements of the speed of sound in water in Lake Geneva. He meet the famous Ampère in Paris during work on electromagnetism.

Marc-Auguste Pictet lived between 1752 and 1825. He is a scientist specialized in meteorology, physics and astronomy. The museum shows some of his cabinet’s instruments for teaching experimental physics.

The temporary exhibitions presented by the Geneva Museum of the History of Science allow an interesting interaction with the visitor, including and even rather for children, and change from the permanent exhibition which will rather inspire enthusiasts because of the certain complexity of the instruments presented. The Invention Space in Lausanne is another place for children to interact with the scientific field.

A video on the museum.