Kids Fun Park is a playroom created in 2018 in Etoy for children ideally between 2 and 8 years old. It is one of the best game rooms in French-speaking Switzerland. 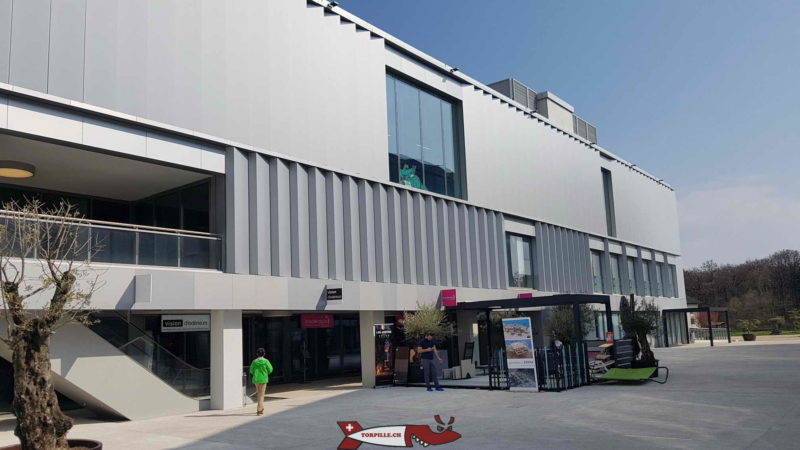 Access by car is not very well indicated. Free parking is available in the basement. An elevator leads to the games room.

The elevator that connects the car park to the games room. 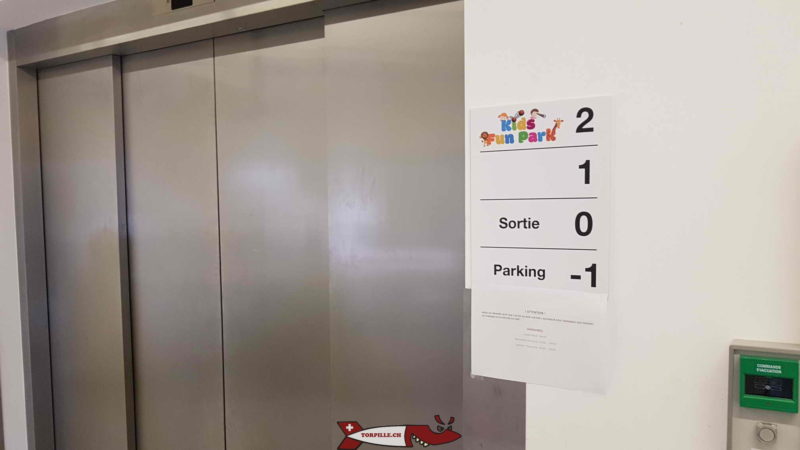 The entrance fees to the games room are as follows:

Kids Fun Park extends over 1,500 m2 on the other side of the Etoy industrial area, which includes Mc Donald’s or Hornbach. It proposes the following activities:

The 3D tree is a mesh structure in which a child must crawl to find its way out. 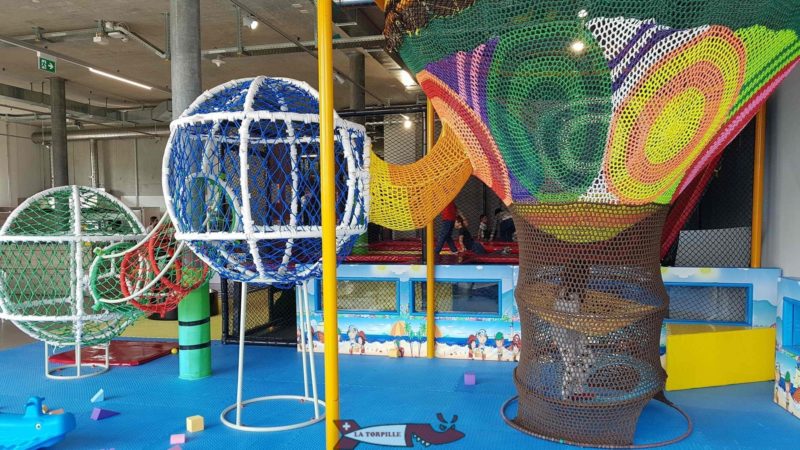 Seven trampolines are available with a tray containing foam cubes for receiving jumps. 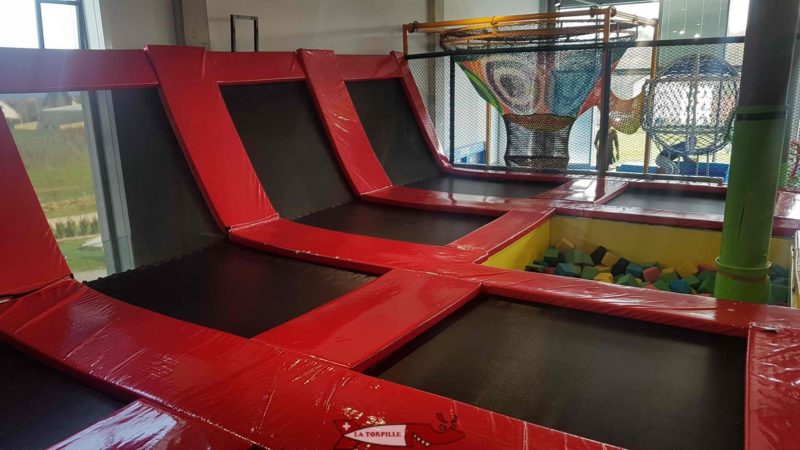 The building elements that a very small child can stack on top of each other.

A baby playing with building elements. 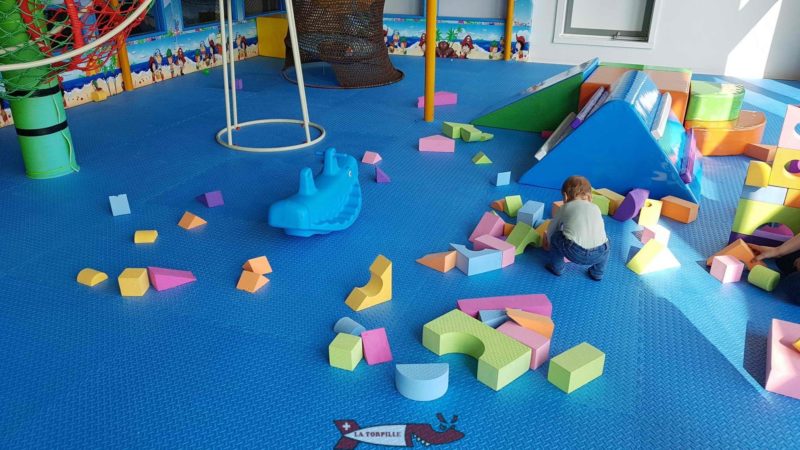 The touch wall allows plastic balls to be thrown against a wall on which an animation is displayed.

Children throwing balls at fish displayed on the tactile wall.

The agility structure consists of two parts connected together by a high tunnel.

The large agility structure connected by a tunnel. 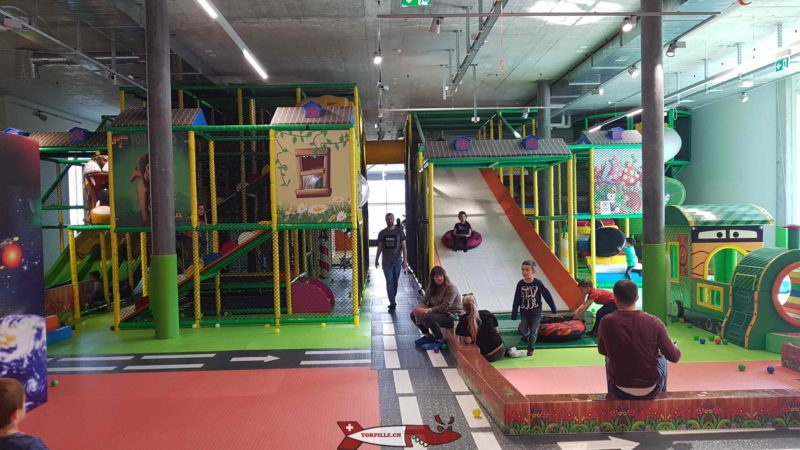 In addition to its track where a child has to overcome obstacles, the structure offers: 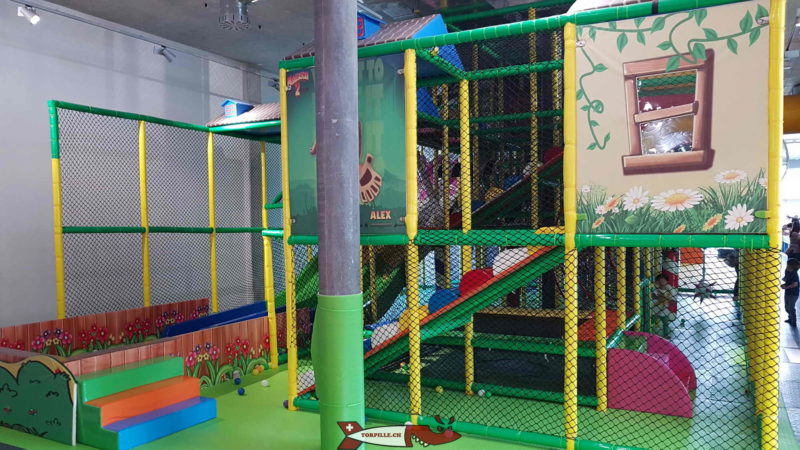 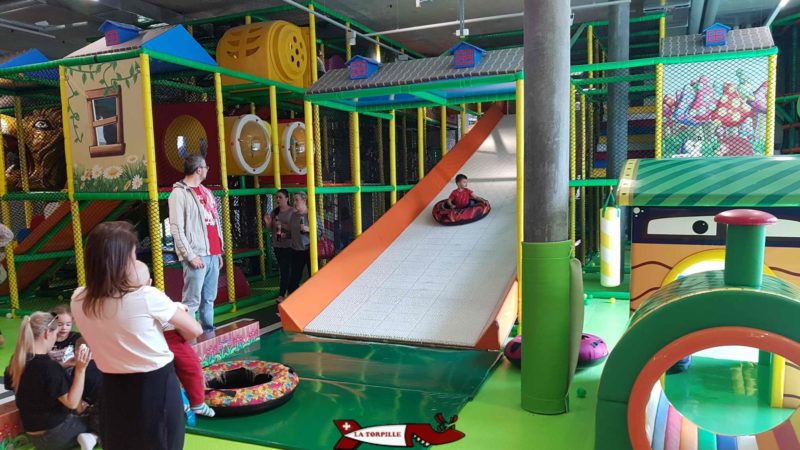 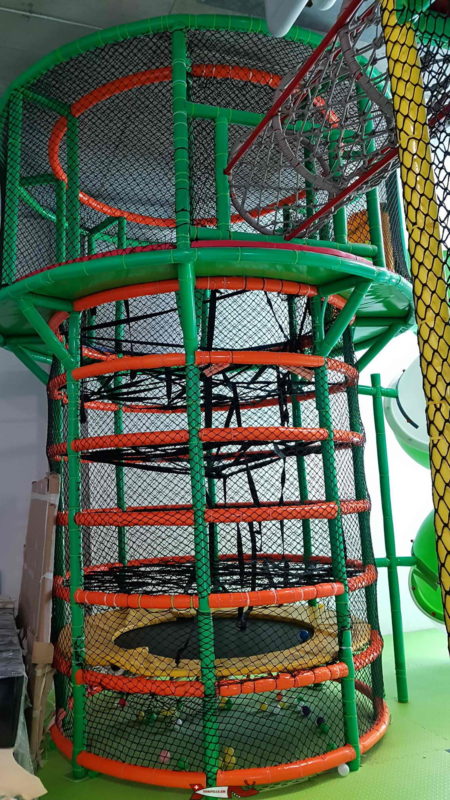 Some climbing elements for the little ones.

A foam locomotive for the little ones.

A long slide whose top is reached by climbing a slippery slope.

A long multicoloured slide accessible when climbing to the top of the volcano. 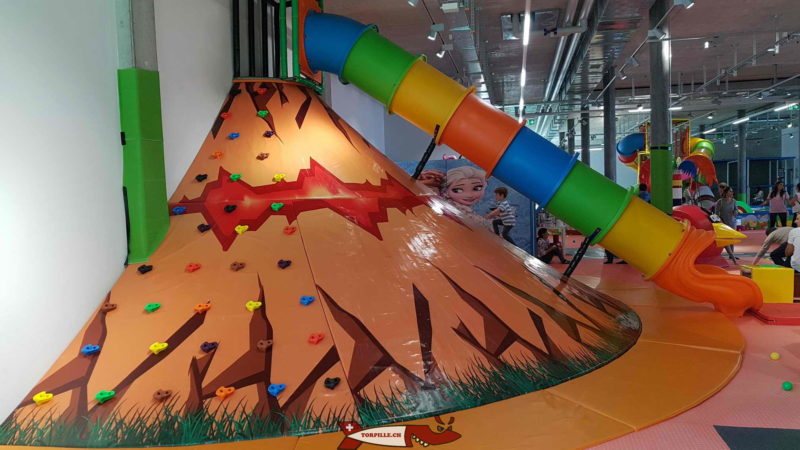 A large space offering an agility course in a swimming pool with 100,000 plastic balls. In the middle is a tower with two slides.

The challenge course with the slides. 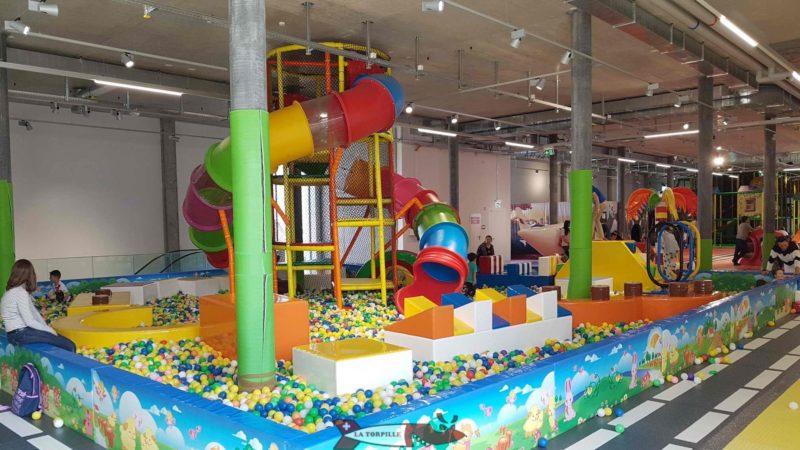 A field closed by a net with goals and baskets.

The football and basketball court at the back of the playroom. 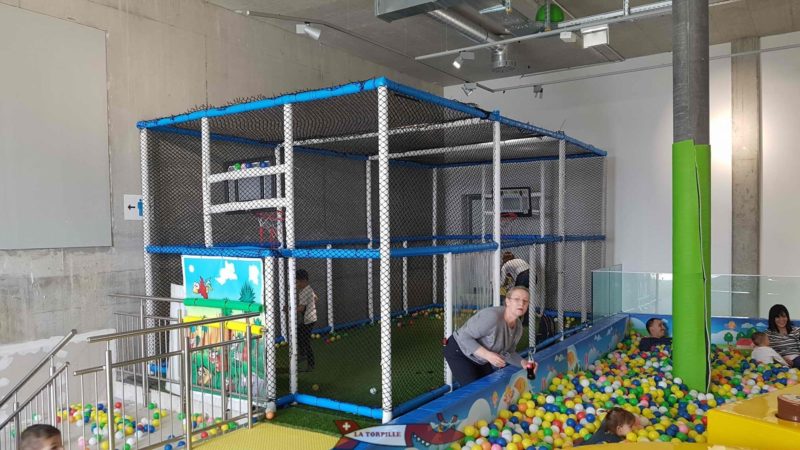 A ball on which a child sits before rotating the structure. 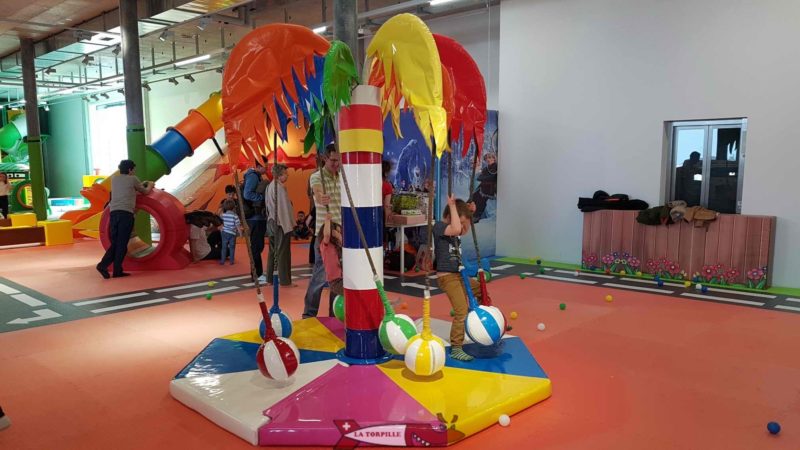 The climbing wall is no longer in use for security reasons. 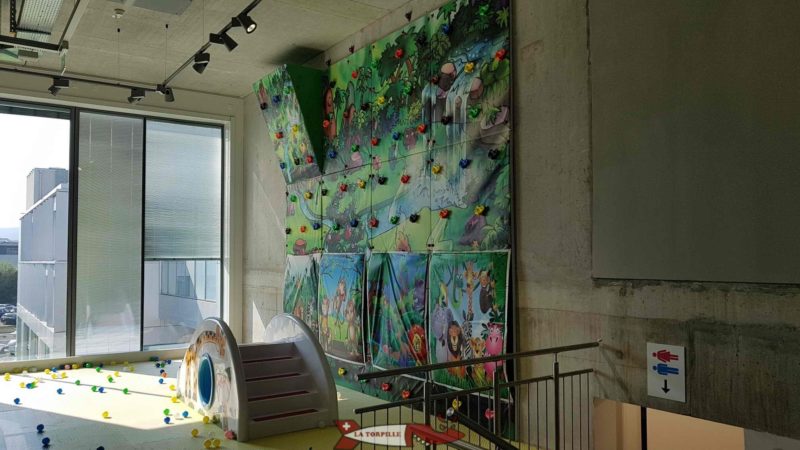 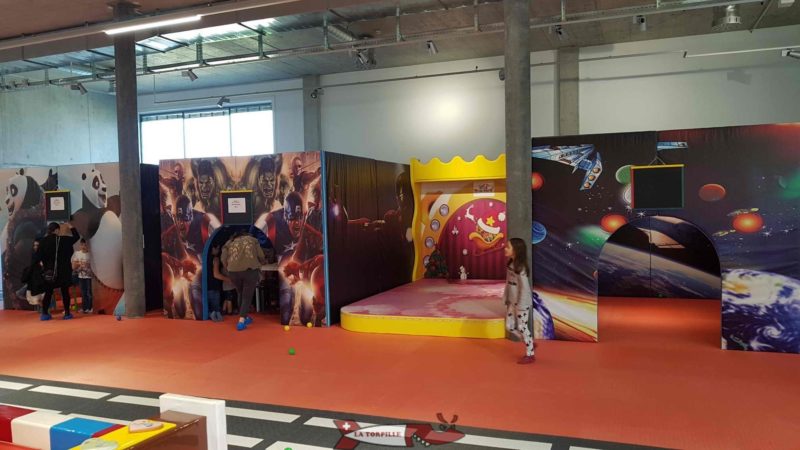 The cafeteria offers snacks all day long with tables. For example:

The chairs in the cafeteria at Kids Fun Park. 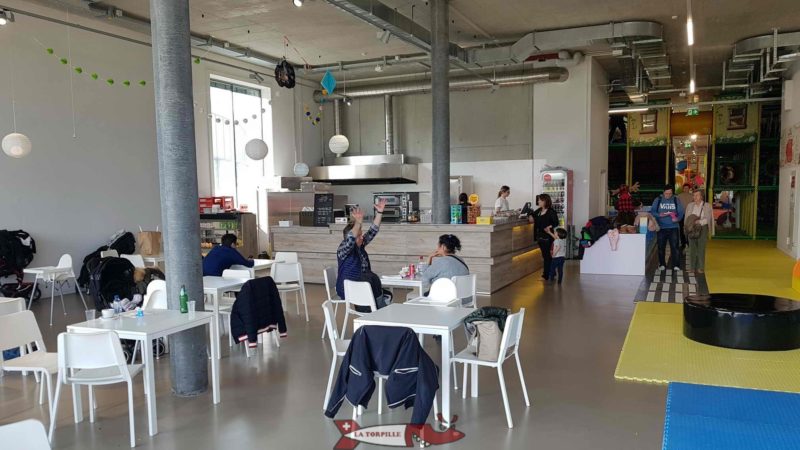 Kids Fun Park is one of the best designed playgrounds in French-speaking Switzerland. It has the following advantages over most other rooms:

A video about Etoy’s game room.