The Montreux Little Train (Petit train des quais de Montreux in french) is a 16-seat electric tourist train that offers two routes from the market square along the quays of Montreux.

The little train at its starting point next to the statue of Freddie Mercury. 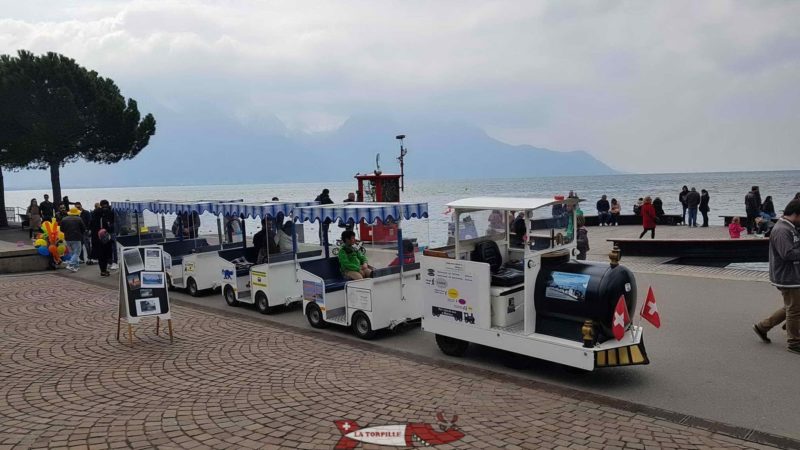 Paid car parks near the market place must be used.

The prices for each route are as follows:

The routes of the little train

The most interesting route (route A) is the one heading towards Clarens, it allows you to discover the following sights: (the B course can be discovered in the video)

The imposing and particularly successful bronze statue of Freddie Mercury (1946-1991) is located at the start of the little train. It was built in 1996 in memory of the famous Queen’s singer five years after his death. Mercury owned a residence in the city of Montreux. The statue represents the singer as he was at the opening of his concert in Wembley Stadium in London in 1986.

The statue of Freddie Mercury regularly blooms with flowers by his fans. 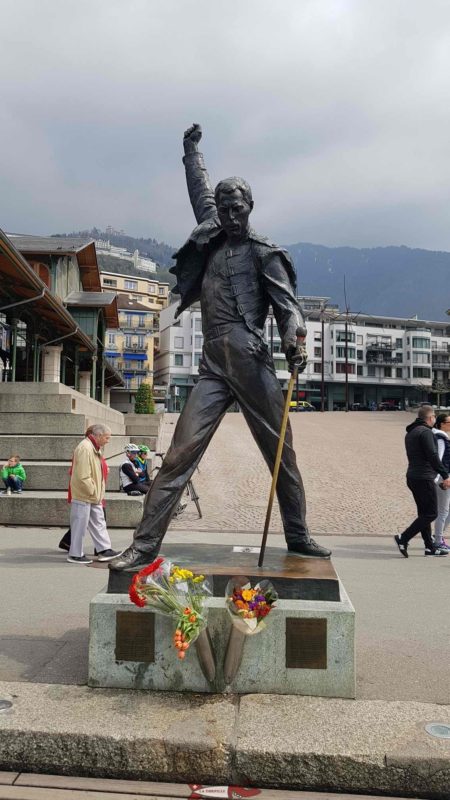 Pontoon on the water

A pretty circular pontoon that allows you to find yourself above the water. It is located at the departure of the small train.

The pontoon over the water. 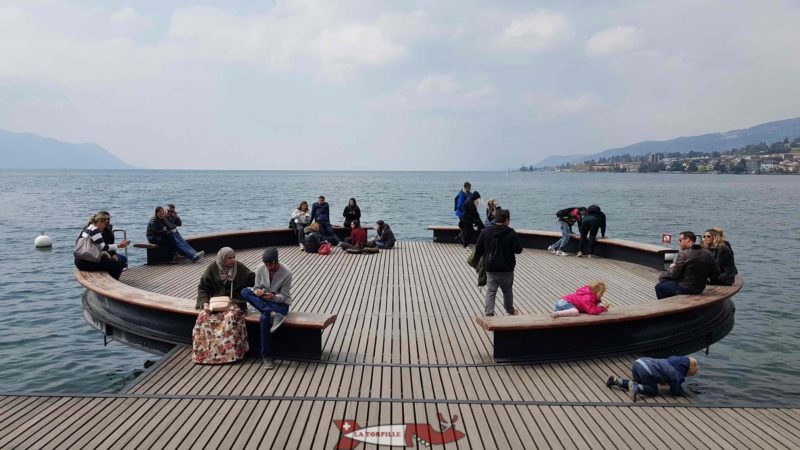 A sculpture next to the departure of the little train in a telephone booth in memory of the founder of the Montreux Jazz Festival, Claude Nobs, who died accidentally in 2012 following a fall from cross-country skiing. The sculpture is created by Pascal Bettex with a style resembling a Tinguely sculpture with a metal ball circulating. It includes some elements of Nobs’ life such as his cottage, his motorcycle, his harmonica and a miniature train that he used to collect.

The sculpture “Hello Claude in a telephone booth. 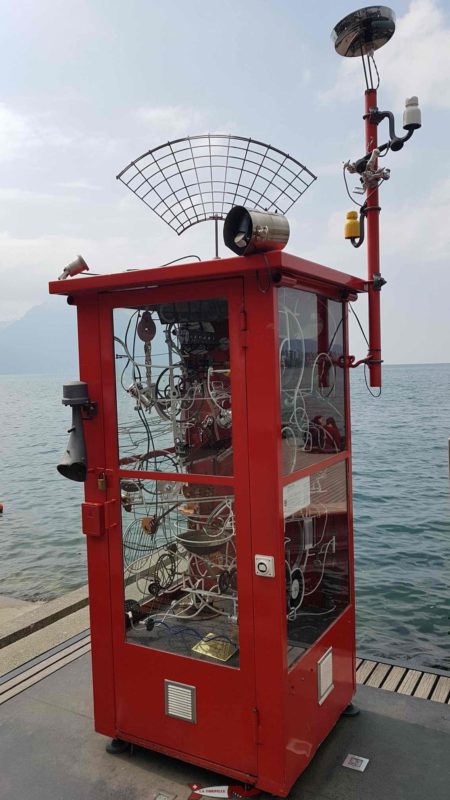 The covered market is a late 19th century building donated by Henri Nestlé. It has the particularity of being made entirely of metal and of resembling the Halles de Paris.

The covered market of Montreux. 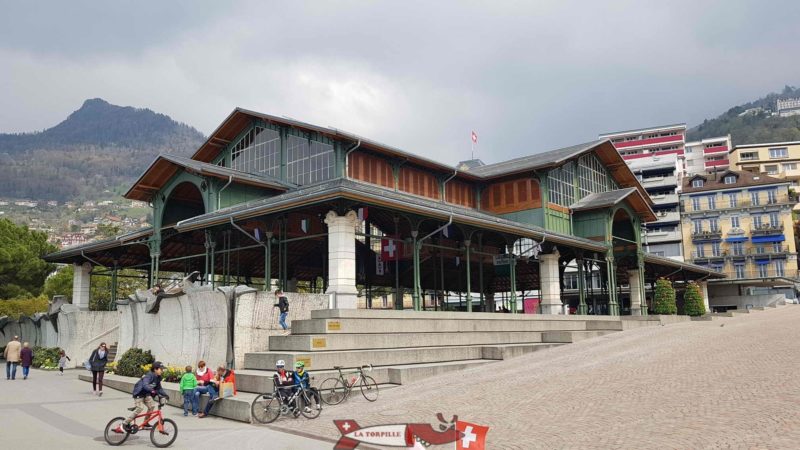 The quays of Montreux are a total of 7 kilometres long.

A pretty view of the flowered quays with the Montreux tower in the distance. 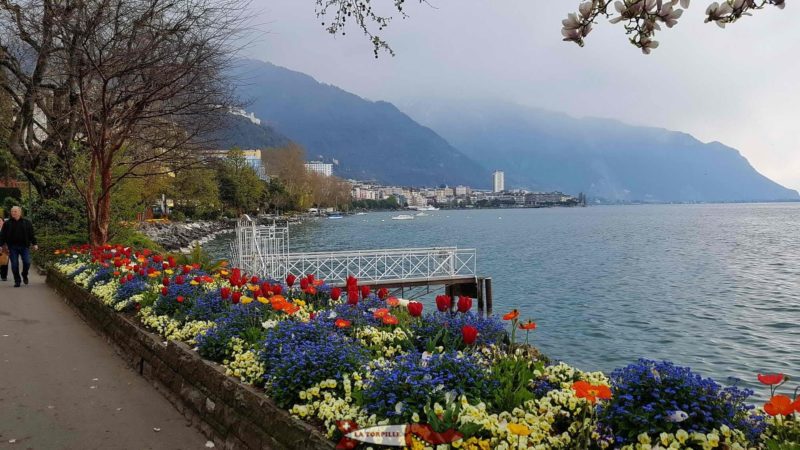 View of the Alps

From the quays, the view is of the French Alps.

The Valais Alps on the left and the French Alps in the middle. 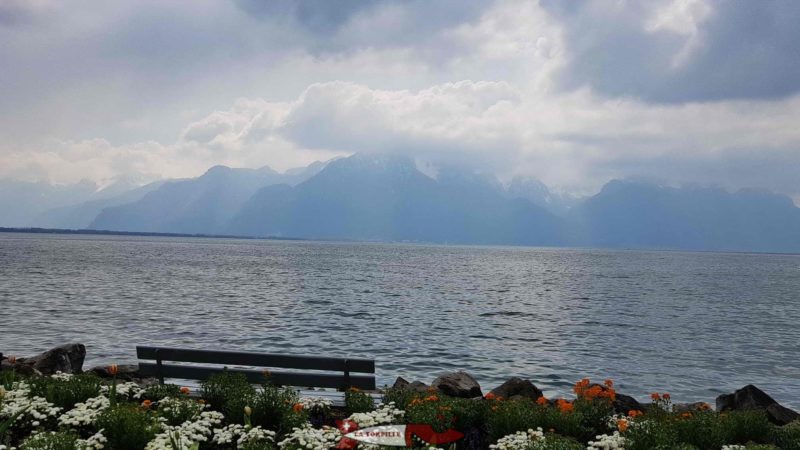 Along the quays are many sculptures that are part of the Montreux Biennale.

A sculpture along the quays of Montreux. 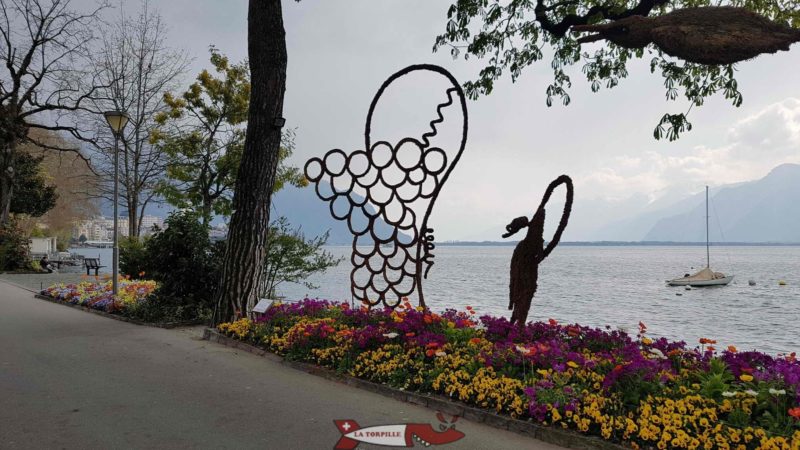 Many flowers and very beautiful trees are found along the quays. Palm trees are also present due to the particularly mild winter climate of the Vaud Riviera.

Palm trees along the quays of Montreux. 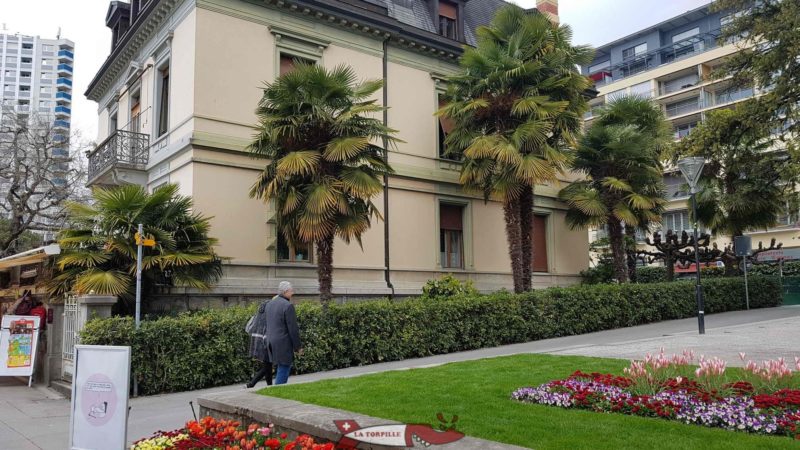 The Montreux Music and Convention Centre (2m2c) was built in 1973. It took on its current appearance in 1993 with the opening of its most famous auditorium, the Stravinsky Auditorium.

Le Montreux Music and Convention Centre with its glass facade. 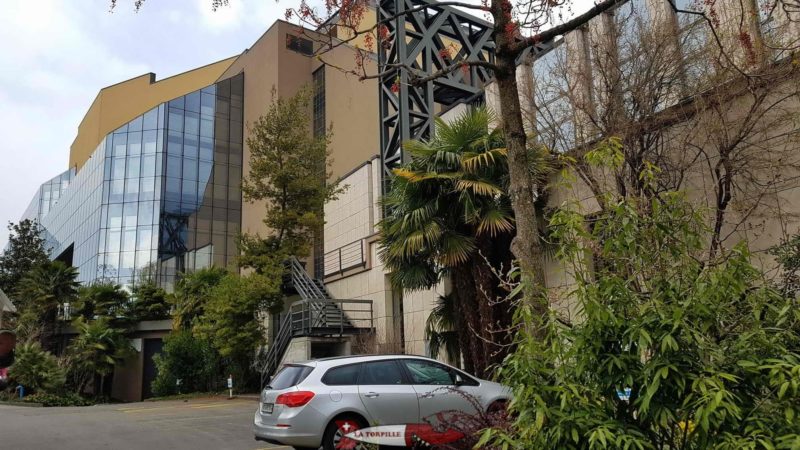 The landing stage allows loading and unloading on CGN boats. 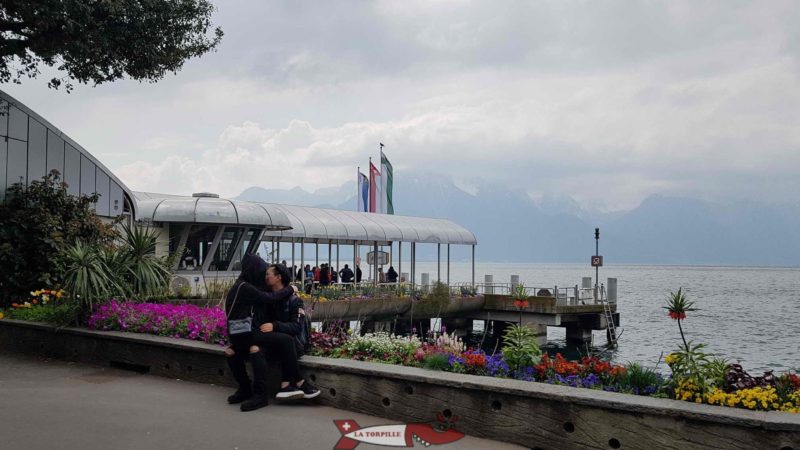 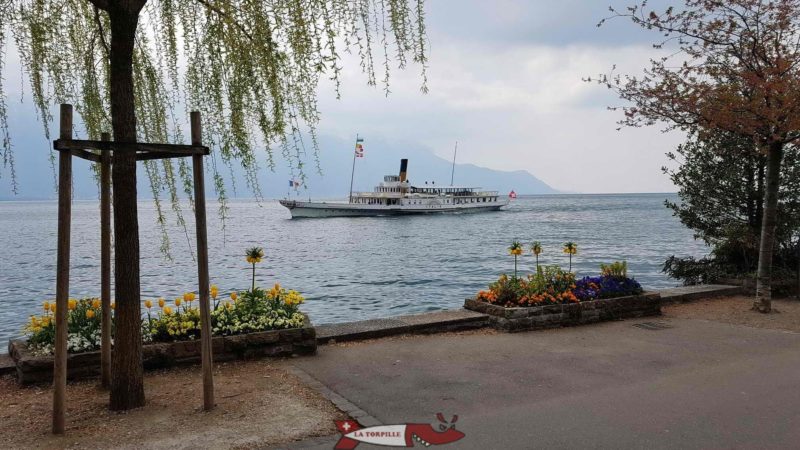 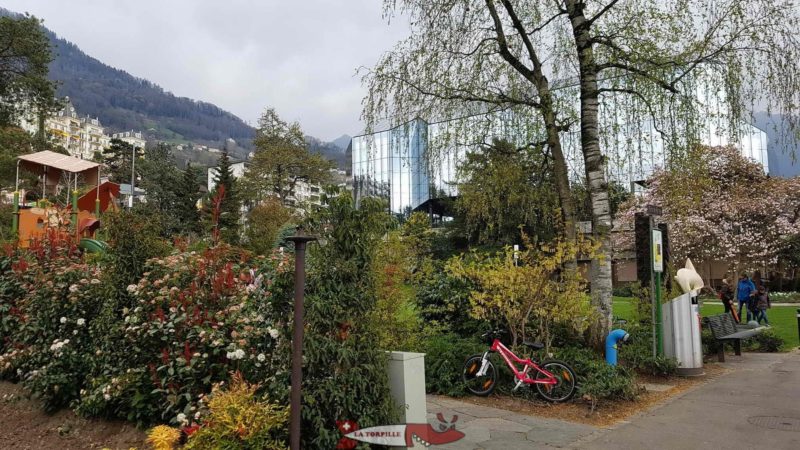 The magnificent Montreux Palace, which has been home to many celebrities since 1906, was built.

Montreux Palace from the little train. 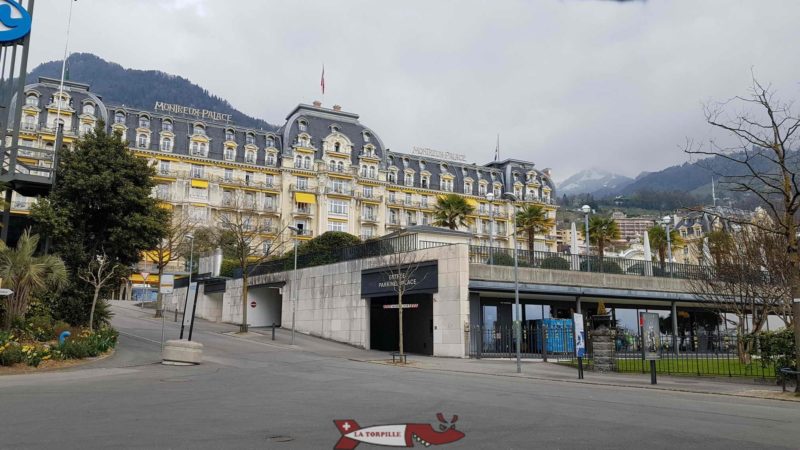 The Torpille team returns disappointed from its journey in the small train of the Montreux. Indeed and unlike the other small trains in French-speaking Switzerland, no information is given on the many curiosities observed along the route. The latter is a round trip by the same route, it would be more interesting to bring the train back through the old town of Montreux.

The two routes are not well enough indicated to the visitor, they are only mentioned in very small letters on the locomotive. Finally, the course made by the Torpille team is shorter than the one indicated on the Internet.

The Torpille team recommends walking along the quays with a good tour guide or smartphone application rather than with the small train.

A video about the “B” track.

Webcam on the city of Montreux. 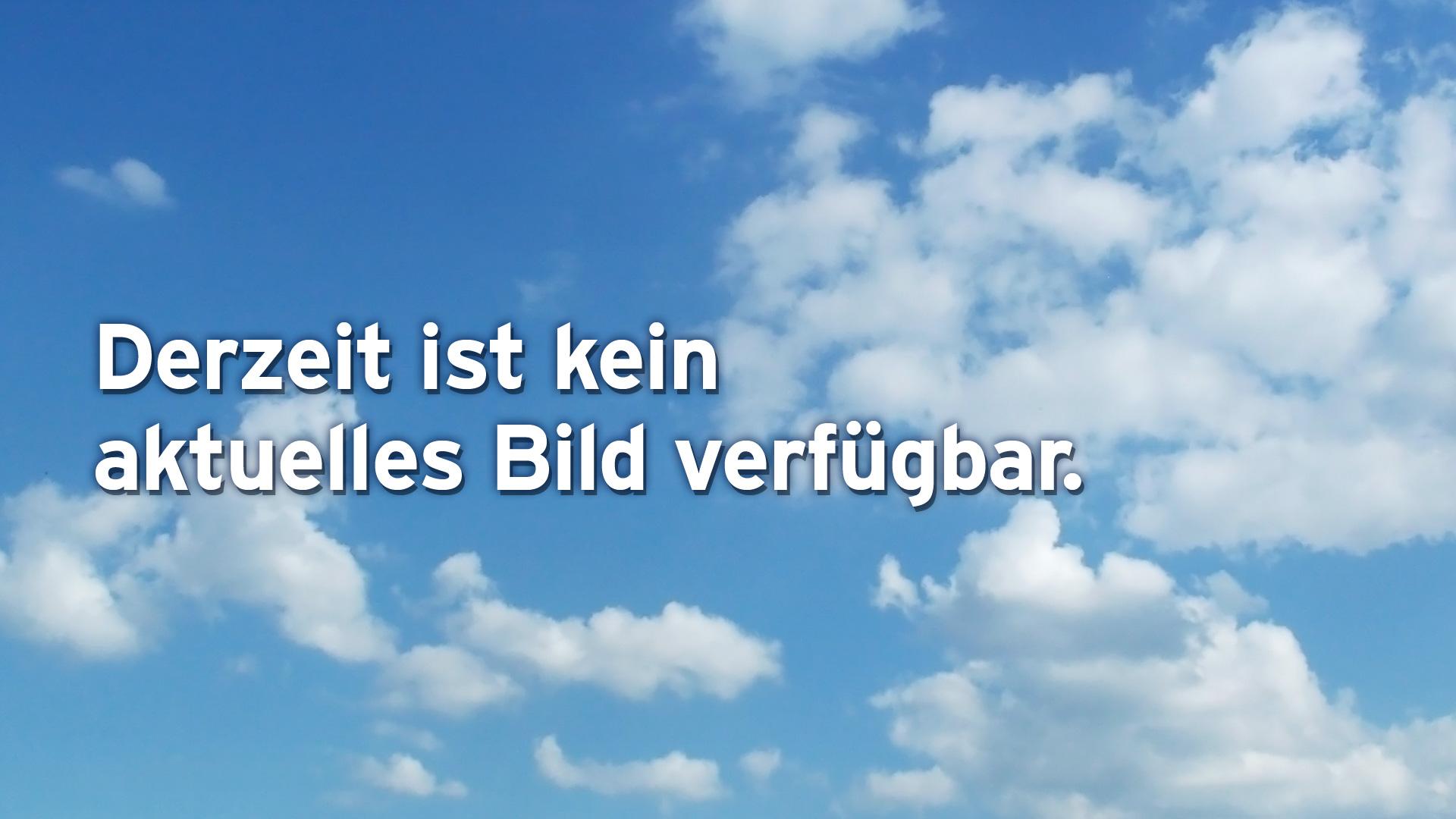