The Marécottes Zoo and Pool are an atypical complex consisting of an alpine zoo and an original swimming pool in the rock. Located between the two, a restaurant with a nice terrace and a playground for children. The total surface area of the complex is 75’000 m2

Aerial view with the different areas.

The swimming pool is only open in summer while the restaurant and the Zoo are open all year round except for a few periods during which, even if no one is on site at the entrance, an automatic coin turnstile is on site and gives access to visitors. The zoo’s website provides information on the different schedules

It should be noted that the Marécottes zoological park is the highest in Europe at an altitude of 1,100 metres and the number of visitors to the zoo and swimming pool complex is remarkable, reaching around 130,000 in 2016 two years after its takeover by the Piasenta family.

Access to the zoo and swimming pool can be done by car from Martigny via the Gueuroz and Salvan bridge or by train with the Mont-Blanc Express, a train linking Martigny to Chamonix. In this case, you should get off at the stop Les Marécottes, a good idea is to take the train in Vernayaz, next to the Gorges du Trient, more convenient access than the Martigny station and with free parking.

The Marécottes zoo and pool parkings.

It covers 35,000 m2 and contains animals that live or may live in our Alpine regions. It has an area similar to the Garenne Zoo, which has a strictly local fauna. The first residents to occupy pens arrived in 1956. Llamas, reindeer, hinds, deer arrived first… The park was expanded in the years that followed with the arrival of wolves, black bears, etc. In total, about twenty species are represented for about 100 animals.

Animals from the zoo.

The zoo and picnic places.

It was built in 1988. The owner of the time went to Finnish Lapland with her architect for the pre-construction of the restaurant. The house is built with a very special kind of “dead wood” that constitutes entire forests in this region. The chalet was first assembled directly on site, each piece of wood was numbered, then transported to Les Marécottes and reassembled in the same way as a puzzle.

Construction of the restaurant in Lapland. Photos kindly provided by Thierry Piasenta. 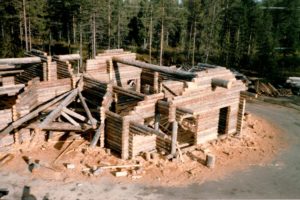 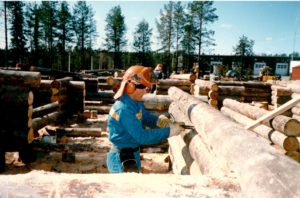 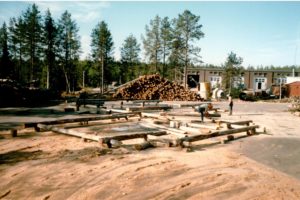 Reconstruction of the restaurant in Switzerland and the latter in 2017. 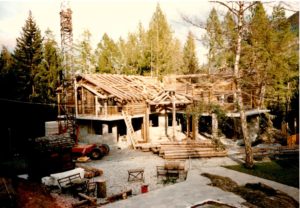 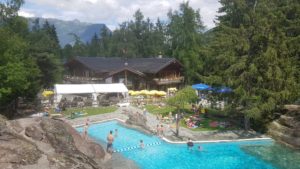 The street where the pool is located is called “Les Combasses” because the small chain of rocks on which it is located is called “Les combassières”. These rocks were carved and worked when the glaciers retreated. The particularity of this formation is that it houses the famous “ice pots”. The swimming pool was a kind of giant ice pot in which a small stream came in and people bathed in water at 12/14 degrees.

The swimming pool with the children’s area.

In the 1980s, a concrete basket was built at the bottom of the pool and the necessary infrastructure to treat a real pool was built. In the basement of the restaurant building, there is the buffer tank, filter tanks as well as the chlorine and acid equipment connected to the outdoor pool. The pool water is heated with a solar system. The entire roof surface is covered by a network of pipes through which water passes, is heated and then returned to the circuit. During the summer the water reaches a temperature between 24 and 27 degrees.

View on the pool from the opposite site of the restaurant. 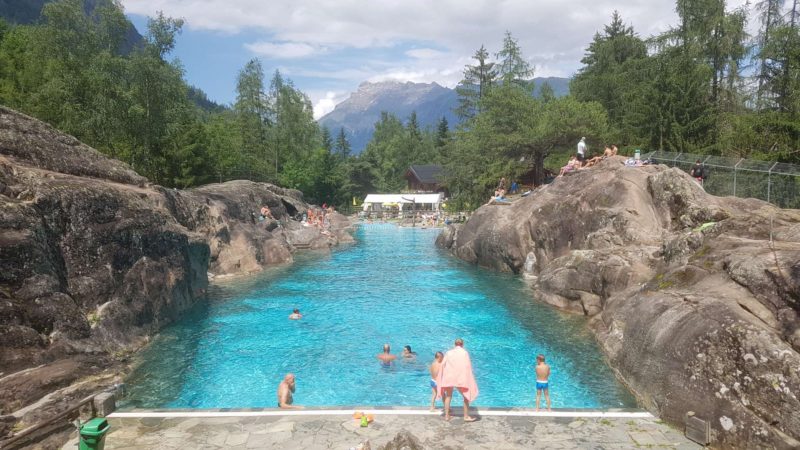 Between the zoo and the restaurant, small children can play in a small playground with a large slide.

The big slide with two turnstiles.

The Marécottes zoo and swimming pool is located on the Tour des Hameaux, a 12 km loop for a duration of 5 hours and which can be shortened if desired. The tour allows you to discover the hamlets of the municipality of Salvan with their traditional buildings as well as local and historical specificities. In particular, we can stop in Salvan at the Radio Museum or the Marconi Foundation in memory of the visit of the Italian Guglielmo Marconi. He was one of the inventors of radio, winner of the Nobel Prize for Physics in 1909 and co-founder of the BBC in 1922. In 1895, he established wireless telegraph transmissions between Salvan and Les Marécottes.

Opinion of the Torpille team

The complex of the Marécottes zoo and swimming pool is particularly original. At the zoo, animals are visible up close even if they are not always present. As it is forbidden to feed them, you can buy food at the cash register, which will attract them to see them better. The swimming pool with its alpine and rocky setting is atypical and worth a visit. Summer weekends, the swimming pool and restaurant can be victims of their success with very large crowds. It is possible to buy a combined entrance to the zoo and swimming pool or separate entrances. For the most motivated, you can visit the magnificent Triège gorges on the same day, 5 minutes by car, continuing the road towards Le Tretien. The walk along the gorges in the form of a loop lasts one hour.

The Triège gorges near the Marécottes zoo and pool.

The Torpille team thanks Mr. Thierry Piasenta for the very large amount of information provided.

A drone video of the Marécottes pool.

A video about the Marécottes pool.

A video on the Marécottes zoo.