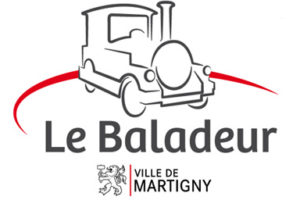 The little train of Martigny, called the “Baladeur” (Walkman), offers two routes through the city from the central square (Place centrale).

The tourist train at its starting point. 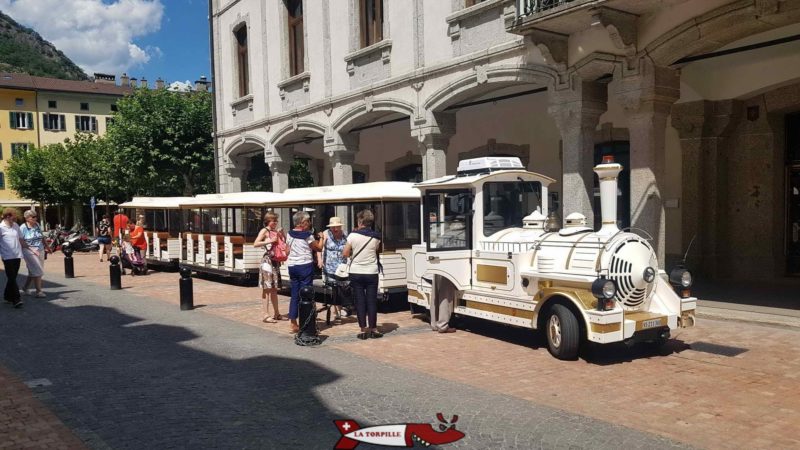 The Manoir’s underground and paid parking is located near the central square.

Two routes are proposed by the small train of Martigny in summer that leave and return south of the central square.

The Torpille team recommends the City Tour that allows you to discover the city of Martigny. The Baladeur Splash tour can be used to get to Western City.

The Baladeur schedule in 2019. 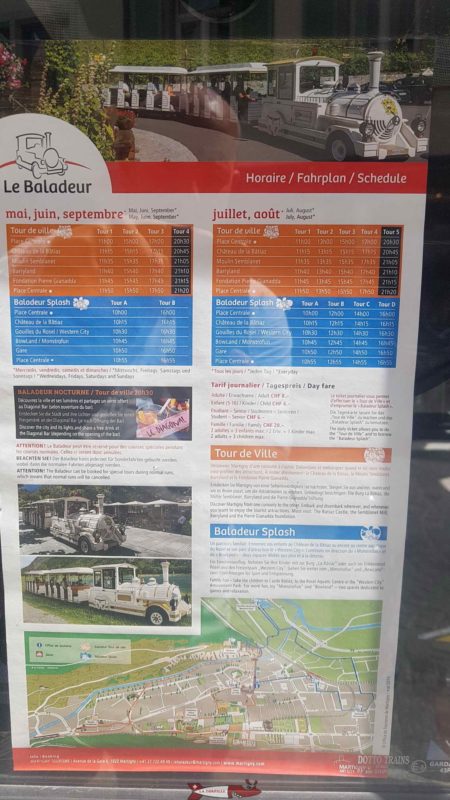 The prices of the little train are as follows:

Tickets are valid all day long, so you can get off at a stop and get back on the train later.

The Torpille team lists below the different places that the Baladeur travels through. The photos are the views that can be seen from the little train.

The central square is built in 1818 shortly after the Gietroz disaster, which took place approximately at the site of the current Mauvoisin dam. An ice dam that formed a lake broke and the released water flooded the Val de Bagnes to Martigny.

The central square from the little train. 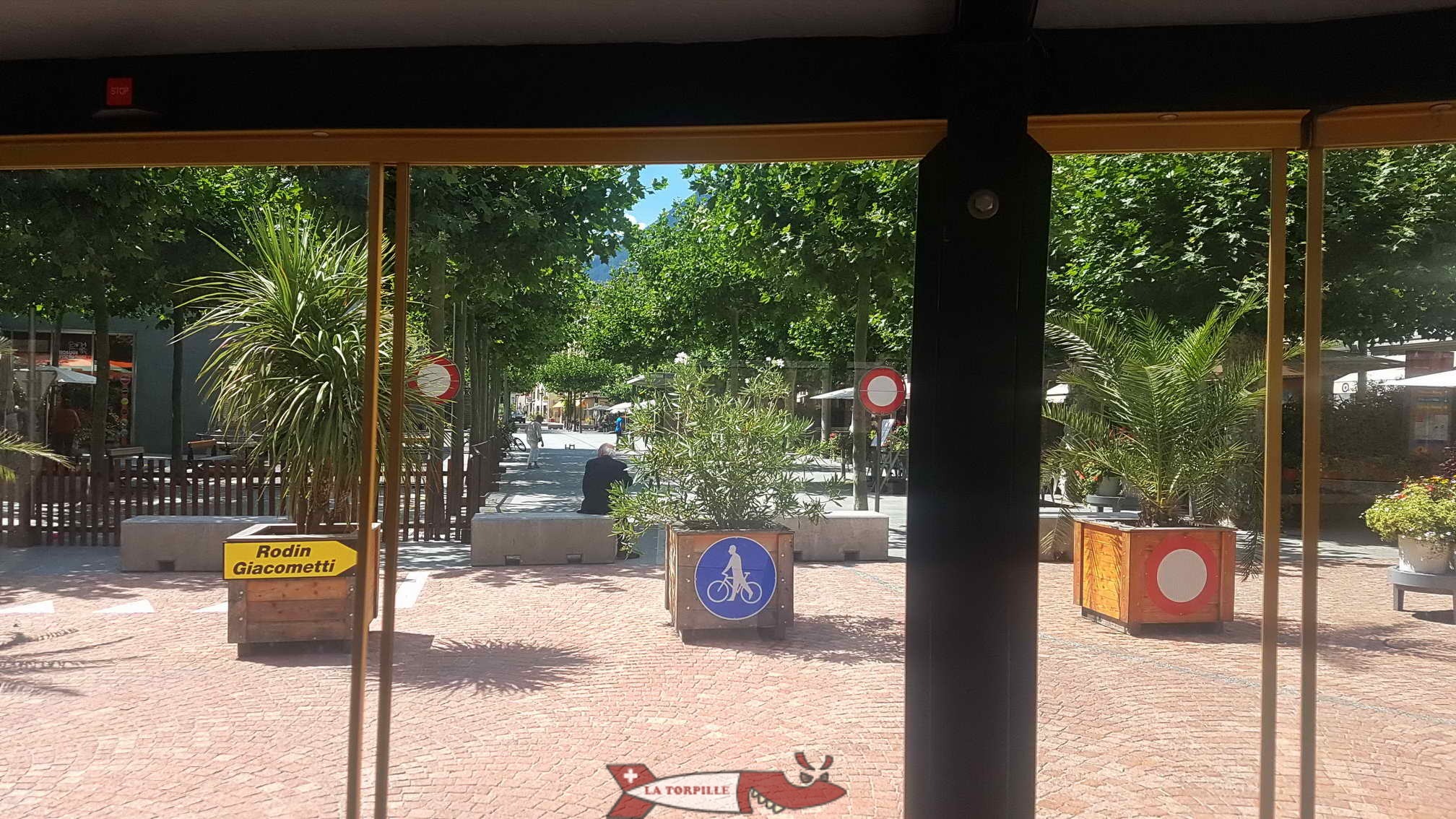 The church of Notre-Dame de la Visitation is built in the 17th century on the foundation of the first cathedral in the Valais dating from the 4th century. It has the highest bell tower in the Valais with a height of 50 metres.

The bell tower of the church of Notre Dame de la Visitation. 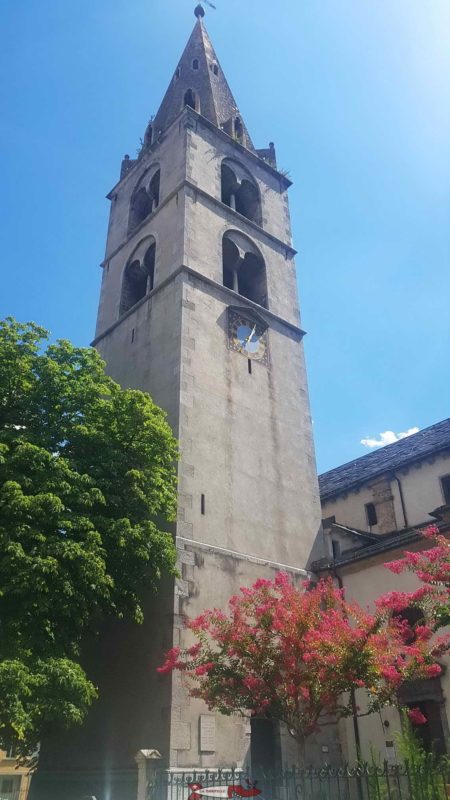 The old covered bridge of Martigny was washed away by the debacle of the Gietroz in 1818, rebuilt in 1829 and then covered.

The old covered wooden bridge that stood on the only path between Sion and Lake Geneva in the Middle Ages. 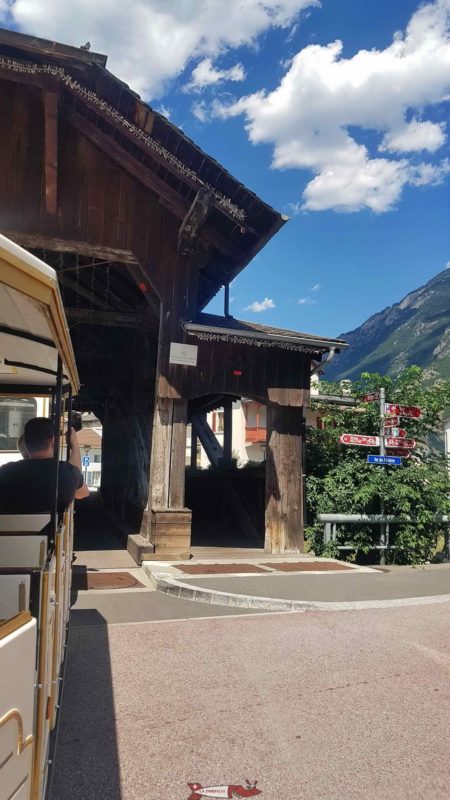 The Castle of Bâtiaz, built in the 13th and 14th centuries, offers a high keep from which one can enjoy a magnificent view.

The keep of the Castle of Batiaz built by Savoie. 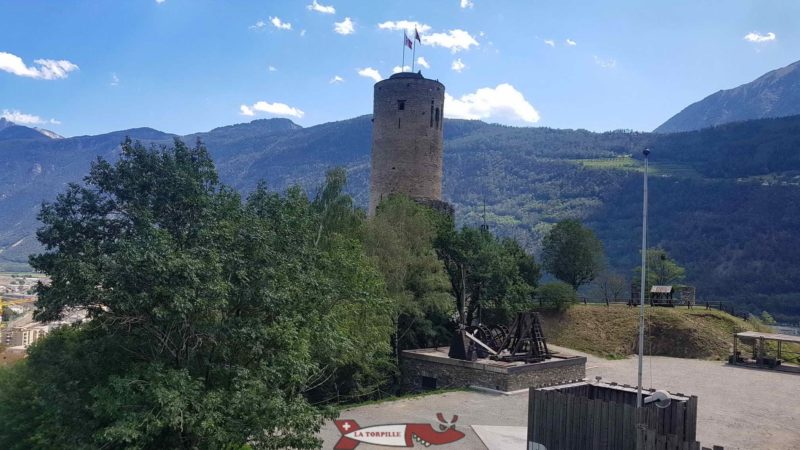 A beautiful view of the Rhône valley leading to Sion.

The Rhône Valley in the central Valais. 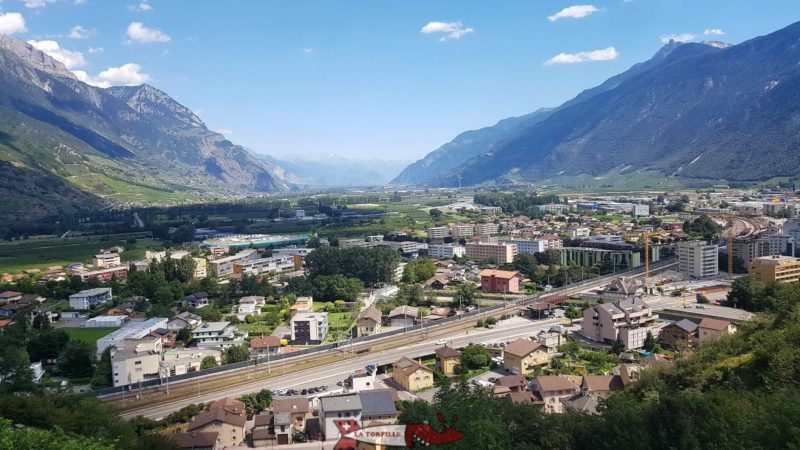 The Dranse River collects the waters of the Val de Bagnes to flow into the Rhône at Martigny.

The Dranse river along the vineyard. 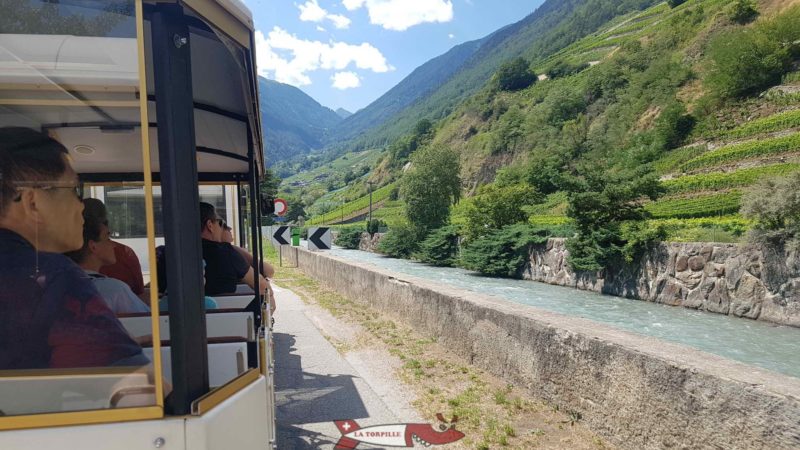 St-Michel Church is a concrete structure built in 1968.

The church of St-Michel in Martigny-Bourg. 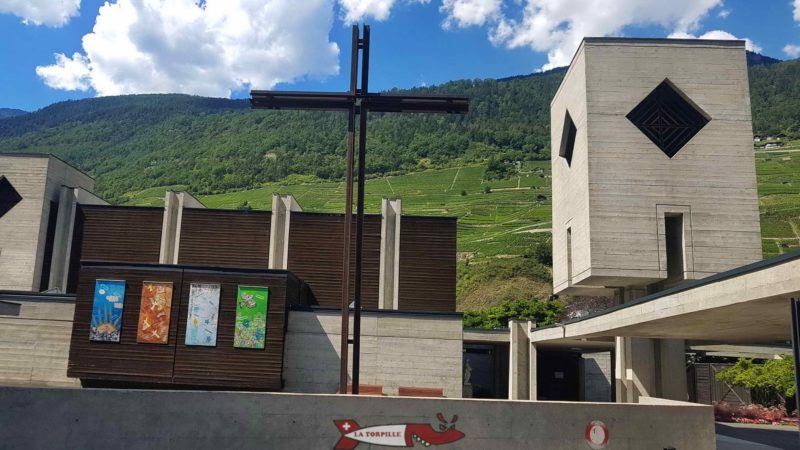 The Semblanet Mill is the oldest working mill in French-speaking Switzerland. It can be visited on request. 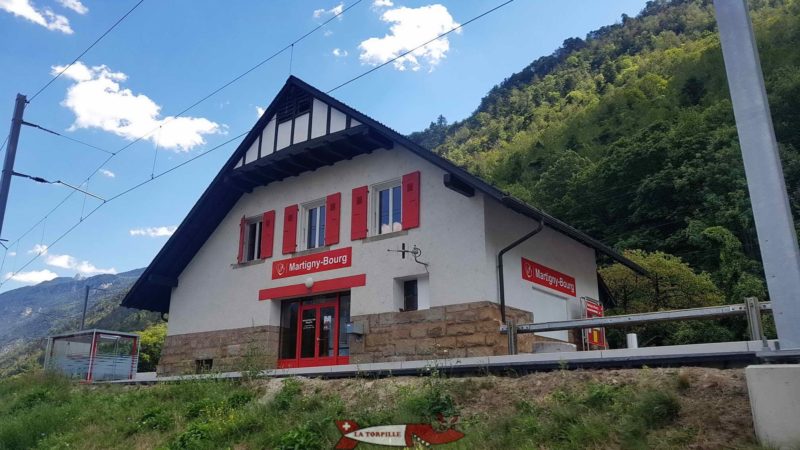 The Martigny amphitheatre was built at the beginning of the 2nd century by the Romans. At that time the city was called “Forum Claudii Vallensium” and followed its Celtic name of Octodure, better known nowadays.

The top of the Roman amphitheatre which forms an oval. 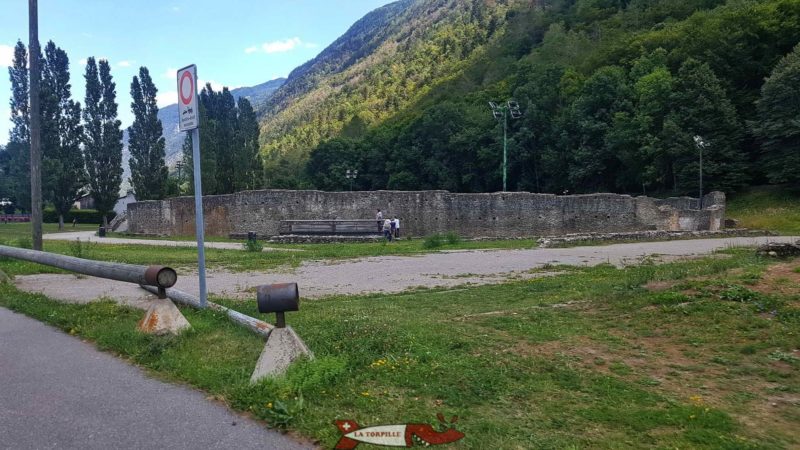 Barryland is a museum and a breeding ground for Saint Bernard dogs in Martigny.

The building that houses the Saint Bernard dogs on the ground floor. 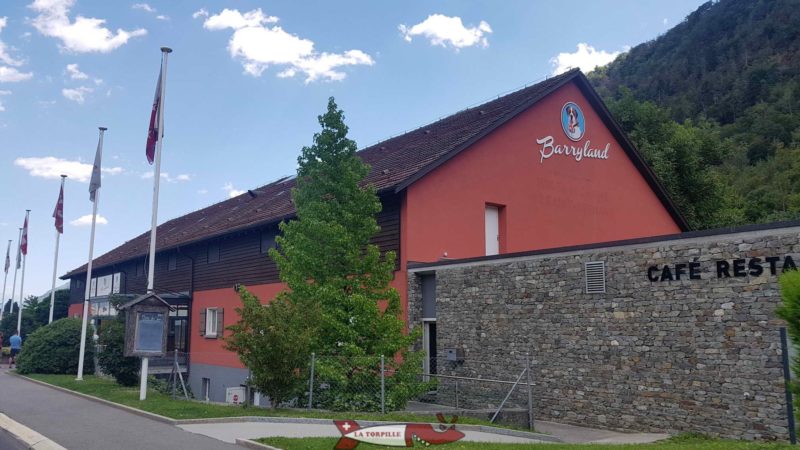 Gianadda Foundation is a structure dedicated to the presentation of artistic works.

Gianadda Foundation was created in memory of Pierre Gianadda who died in a plane crash in the late 1970s. 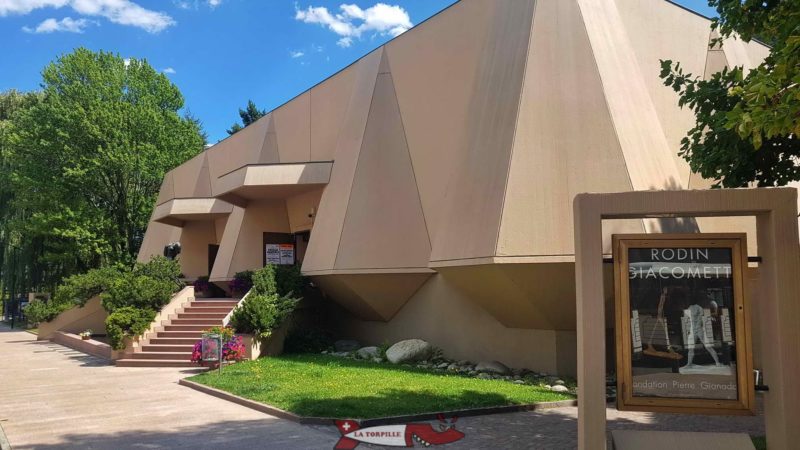 The tepidarium is the Roman thermal baths where you can take warm baths. 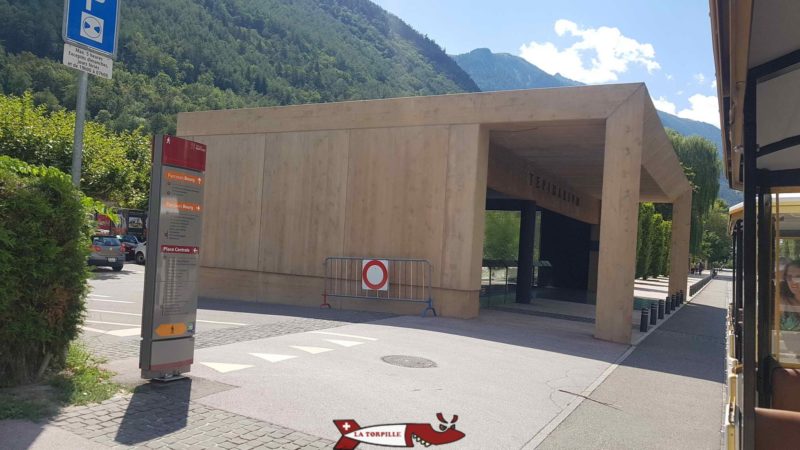 The ice rink of Octodure forum. 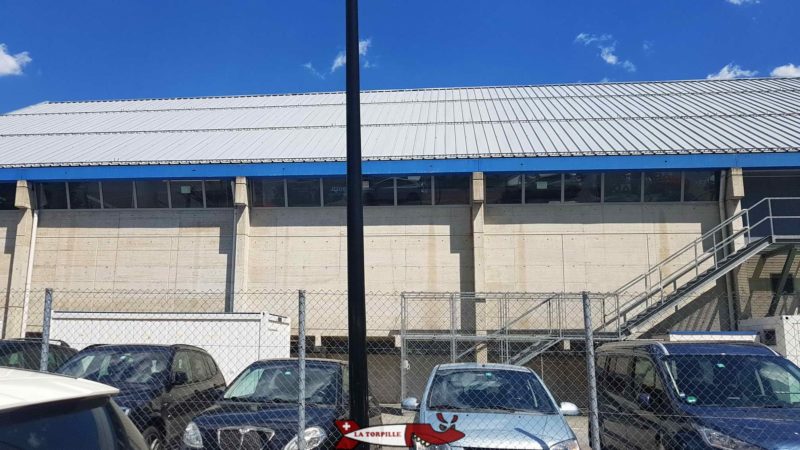 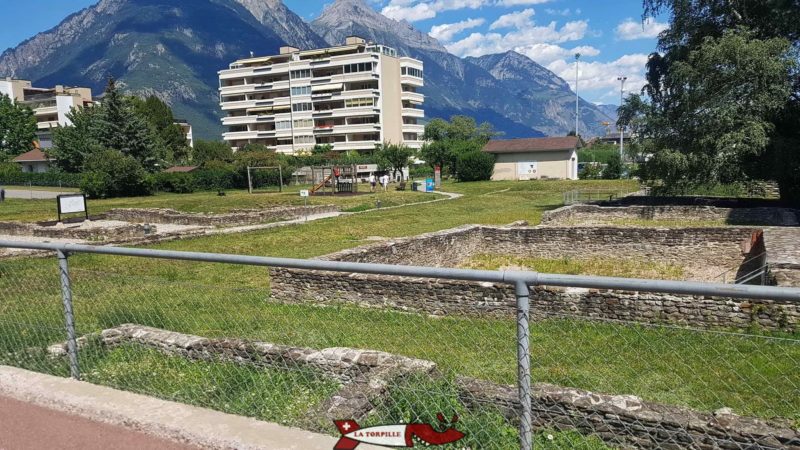 The Protestant temple with its bell tower. 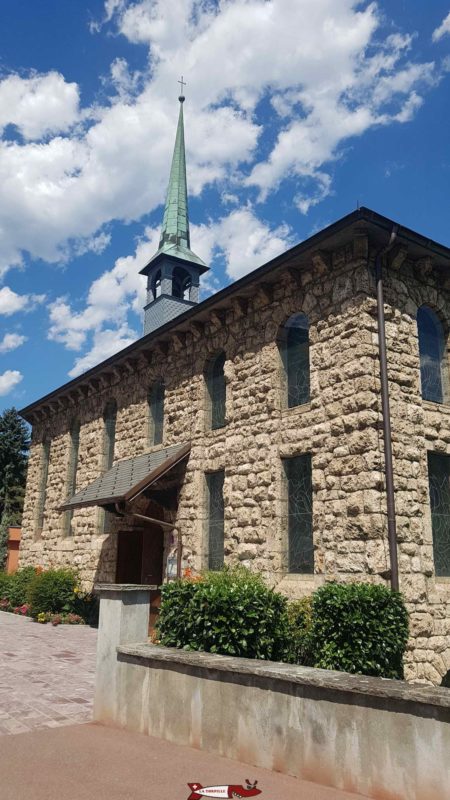 Morand is known for the production of eau-de-vie and especially the famous “Williamine” made from Valais pears. 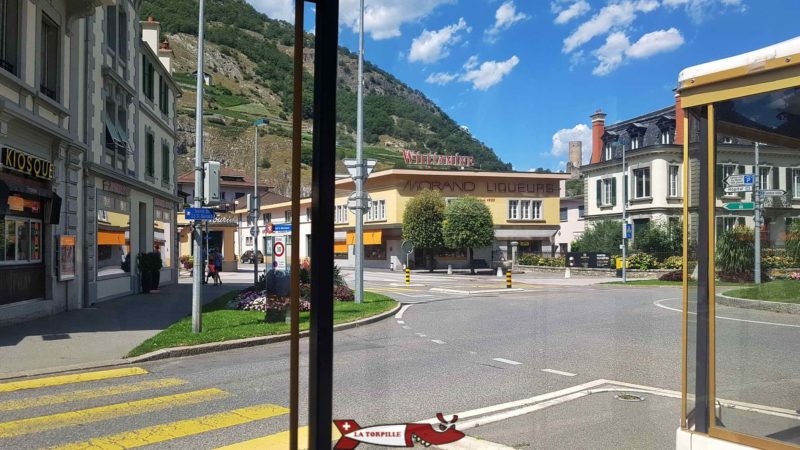 A video about the Martigny little train.

Webcam on the central square of Martigny where the little train starts and ends. 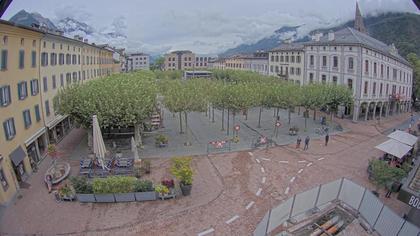