The Olympic Museum in Lausanne is created in 1993 at the instigation of the then President, Juan Antonio Samaranch, and completely renovated in 2013. It is located on the shores of Lake Geneva in Ouchy and presents exhibitions on sport within the Olympic movement. In the park housing the museum you can see some sculptures related to sports. With more than 300’000 visitors per year, it is one of the most visited museums in Western Switzerland.

The entrance to the Olympic Park which contains the museum.

The entrance to the Olympic Museum with a high jumping structure set at a world record level of almost 2.5 metres.

The ticket office on the ground floor of the museum.

Paid parking spaces are available along the lake road in front of the museum or at the Navigation Parking 500 metres from the entrance to the Olympic Park.

The museum consists of 4 floors and an outdoor exhibition area. The interior space includes 3 permanent exhibitions and starts on the first floor and ends in the basement.

A floor map in the Olympic Museum. 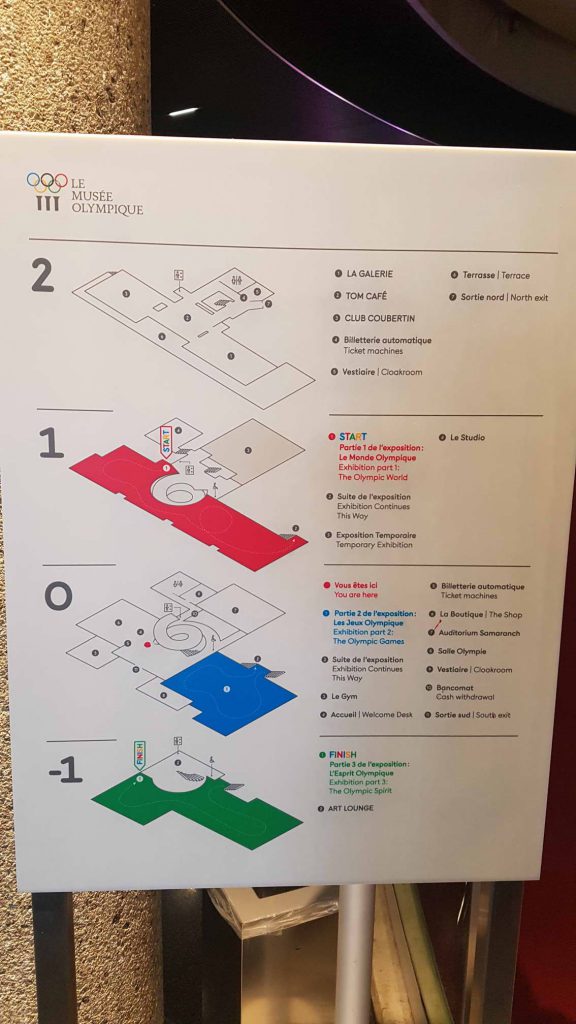 Level 2 consists of a cafeteria with a gallery and a terrace with a nice view of Lake Geneva.

The view of Lake Geneva from the terrace.

A panel on Olympism in Greek times.

Another panel listing the dates of the ancient Olympic Games.

Level 0 deals with the theme of the Olympic Games. It gives an overview of the different Olympic activities. For example, it groups together objects that belonged to the different champions.

The stairs to go down to level 0.

Level -1 addresses the theme of the Olympic spirit. It shows aspects related to the games such as fraternity, Fair Play or nutrition. Some agility games are available at the end of the museum.

The stairs go down to level -1.

An agility game for the visitor.

A table showing the physiology of the athletes according to their discipline.

The outside of the museum displays sculptures in the Olympic Park and presents different disciplines of athletics such as a 100-metre track, a high jump bar and shot put balls in order to get a closer look at what they look like.

A sculpture of cyclists.

A video on the museum.