The Salanfe dam (barrage de Salanfe in french) is located in the commune of Evionnaz in the district of St-Maurice in Valais. It is a concrete gravity dam like the one of the Grande Dixence. It was built from 1947 to 1953 and forms the Salanfe Lake in a wonderful natural circus.

Access to the Salanfe dam is not possible directly by car, you have to leave your car in the car park after the Van d’en Haut campsite, 500 metres from the end of the paved road.

Ascent to the dam

The ascent to the Salanfe dam is steep and takes about 1 hour and 15 minutes via a footpath or by the road that leads to the hostel next to the dam. The difference in elevation is nearly 450 meters.

The path under the Salanfe dam.

Arrived at the crown of the Salanfe dam, we are impressed by the magnificent view over the Salanfe natural circus. When looking at the lake, you can see the Luisin massif on the left, the Tour Sallière massif on the opposite, and the famous Dents du Midi on the right. It is the most beautiful view from all the dams visited by La Torpille. The 7km walk around the lake can be done in 1h45 minutes. You can also stop at the Auberge de Salanfe for a drink, enjoy the view or even sleep overnight.

From left to right, the Auberge de Salanfe, the arrival of the underground funicular linking the Miéville power plant to the dam and the Salanfe chapel.

180 degree view from the Salanfe dam.

Les Dents du Midi (in the background on the right) from Les Rochers de Naye. The Salanfe dam is just behind the Dents du Midi.

The watershed of about 32 km2 is relatively small compared to other dams in the Valais. The natural watershed is made up of the Cirque of Salanfe over an area of 18 km2. Water is collected from the Susanfe Valley in the west across the Tour Sallière in 3 places through a 4 km long supply tunnel through the mountain, capturing the waters of the Saufla. Two pumps are used to pump the water up to the supply tunnel.

View on the Tour Sallière (in the middle) from the top of the Salanfe dam.

The lake water is brought to the Miéville power plant in the Rhône valley with a 7.2 m3/s underground penstock over a distance of 4.6 km and after an important waterfall of 1472 m. The Miéville power plant has two Pelton turbines with a maximum capacity of 70MW and produces approximately 120 GW/h per year. Only the waterfalls between the Grande Dixence dam and the Bieudron plant (1880 m) and between the Fully dam and its power plant are more important in Switzerland. The water turbined by the Miéville plant is then discharged into the Rhône.

The Miéville plant in the commune of Vernayaz.

The dam is affected by the “concrete disease” which causes the structure to swell. It is due to an alkali-granulat reaction unknown at the time of the construction in 1950. To simply explain this reaction, we can say that concrete consists of a mixture of sand, small stones, cement and water in very precise proportions that hardens for a certain time after being mixed. In the agglomerate thus formed, small spaces are made up of water and air with a high pH which will interact with the silica that constitutes the sand and the small stones of the concrete by increasing the pressure thus causing a swelling and then a crack in the structure. This alters the mechanical properties of the concrete. The Salanfe dam was particularly affected by this problem, so that maintenance works had to be carried out in 2013. These are only used to delay the spread of irreversible swelling in concrete that has been cut vertically over 1 cm wide with a saw. The incisions are gradually closing.

In addition to the splendid natural circus and the dam, the Salanfe river shaped the Dailley gorges below Van d’en Bas and the Pissevache waterfall in the Rhône valley. 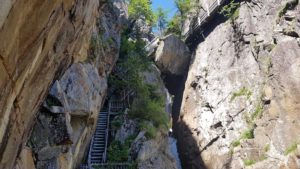 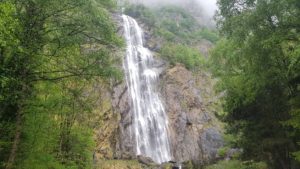 A video on the Salanfe dam.