The salt mines of Bex are a very interesting tourist attraction to discover the exploitation of salt in Western Switzerland over the years.

The history of salt in the Bex region began more than 500 years ago with the discovery of rivers that were found to contain salt as early as the 15th century. In the middle of the 16th century, the first mines were dug in the Bex-Aigle region with the Panex mine in 1534. Today, only one large mine, the Bévieux mine, created in 1680, is still in operation. It is this mine that is open to the public and known as the Bex salt mines.

The entrance to the Bévieux mine.

Several car parks are available next to the reception of the Bex salt mines.

Maps of the three parking lots.

First of all, don’t forget to book your visit on the Bex Salt Mines website. This is not obligatory, but it avoids coming for nothing in case of heavy traffic. Visits are only made with a guide, who is also rather friendly and knows his subject well, and take place 5 times a day. They take about two hours and are suitable for all ages. Please refer to the bottom of the page for details of the visit.

The entrance fee is as follows:

Reopened to the public in 2018 after more than a year of work, the Bex Salt Mines have benefited from the extension of the railway route to increase and facilitate the flow of visitors and, at the end of the visit, the creation of an artisanal salt production unit and the tasting of soft toffees made with Alpine salt.

The visit, which begins with the viewing of a video on the history of the mines and the production of salt, allows visitors to see the huge amount of work carried out by the miners over the centuries, first using rudimentary tools and then with different types of machinery. The creaking little train that you take to get inside the mine plunges the visitor into the world of the miners.

At the beginning of the tour of the Bex salt mines, one learns that all the salt harvested on Earth is of marine origin, including that of Bex, because several hundred million years ago the ocean covered the region and after its retreat, the salt remained trapped in the rock.

The washing of the rock produces a mixture of water and salt, the brine. The brine is taken to the salt plant where the salt is produced by heating the brine to evaporate the water. The heating energy used is first wood, then coal and finally, today, electrical energy produced by a hydroelectric power station on the Avançon river.

The methods of extraction of brine and heating were perfected over the years with the desalination of the rock at the extraction site around 1860 and the process known as thermocompression, invented in 1877 and still used today, which makes it possible to limit the energy used for the evaporation of water.

Nowadays the washing of the rock is done by injecting water into the rock, the brine goes down by gravity.

The Bex saltworks located a few kilometres from the tourist entrance to the mines. Photo Wikimedia Roland Zumbuehl.

History of Bex salt mine

The history of the Bex salt mines is closely linked to the Canton of Berne. In fact, since 1475, the strategic region of Aigle, to which Bex belongs, has been occupied by Bern following the victory of the Swiss Confederation during the Burgundian Wars. In 1536, Bern invaded the entire Pays de Vaud and remained there until the end of the 18th century before being replaced by the brand new canton of Vaud. The Bex mine was managed by the canton of Vaud until 2002 when it was privatised. Finally, in 2014, it was integrated into the Swiss Saltworks Group, which includes the other saltworks in Switzerland and produces 600,000 tonnes of salt per year, half of which is used for road salting.

The Bex mine still employs around 50 people today after having employed more than 350 during the 19th century and is the only mine still operating in Switzerland.

Gypsum crystals from the Bex mine on display at the museum of earth sciences in Martigny. 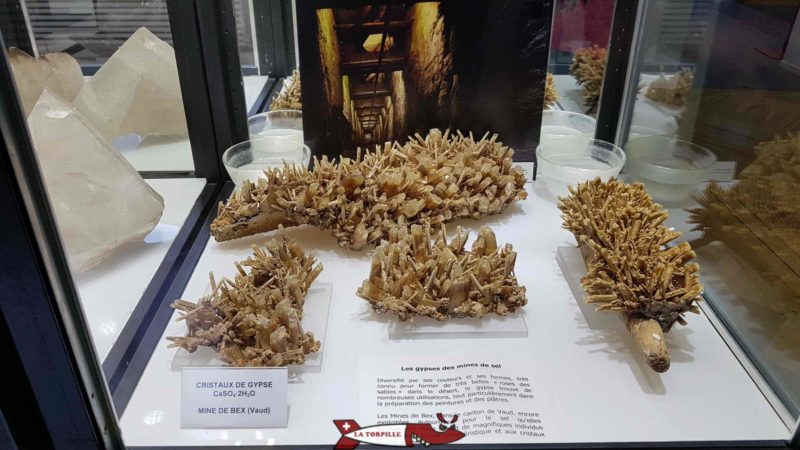 Many salt mines in Europe closed their doors in the 20th century, which is not the case for the Bex mine, which is still in operation even though it has been threatened with closure several times in its history. It is still facing problems of profitability due to the cost of extracting brine from the mine and the cost of energy required for water evaporation. Other saltworks in Europe and Switzerland can also drive salt prices down. An interesting map shows the active mines in Europe. 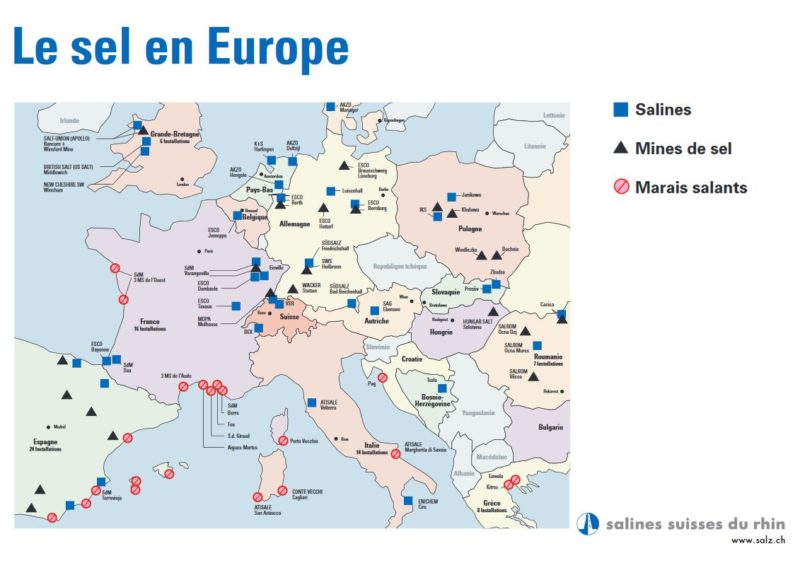 Next to the mine

Note that it is possible, inside the salt mines of Bex, to rent the restaurant and to go trekking with a guide for a deeper discovery. The reception offers various salt-related products for purchase.

Stages of the visit

A very detailed document in french “From A to Bex” gives explanations about the mines of Bex.

A video on the visit of the mines

Another video on the mines visit

Webcam in the city of Bey.