Swiss Vapeur Parc is a park of model trains on which the visitor takes a seat. Located in Le Bouveret near Villeneuve, it covers 19’000 m² with tracks totalling 1’500 m in length, 2x longer than in 1989 when the park was created. The park is ideally suited to children under 10 years old as well as enthusiasts.

The park consists of the following elements:

The map of the park. Since 2019, a new area is under construction, it will house a warehouse-museum in the near future. 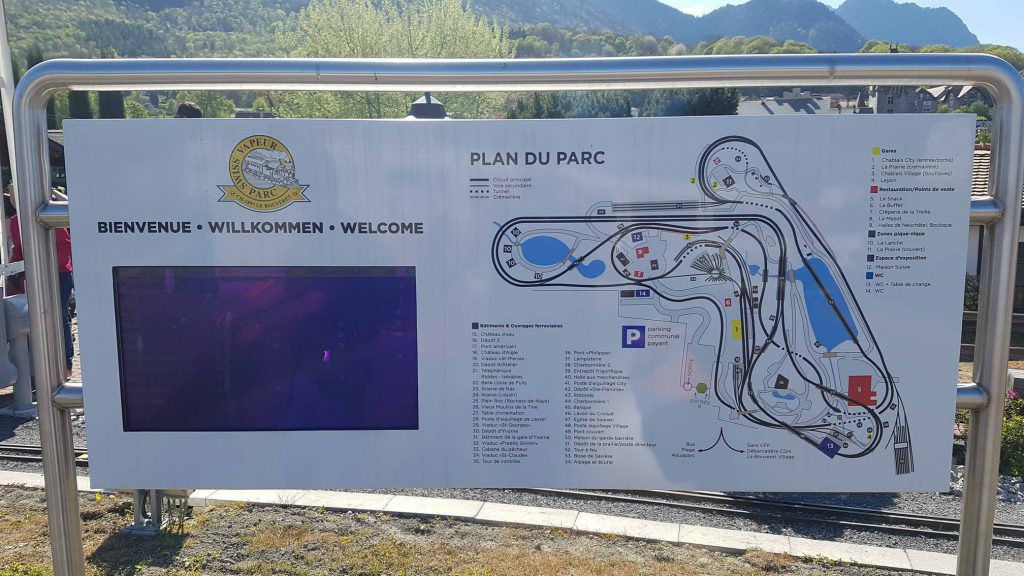 Numerous trains in colours of some private Swiss companies such as the MOB or the Rhaetian Railway run through the park.

Visitors on a train wagon.

The park has 4 train stations, one of which has a rack train, and 6 warehouses for trains, the main one being located next to the turntable.

The main station is Chablais-City.

The warehouse where some steam engines are exposed.

5 tunnels and 10 bridges including a 50-metre viaduct decorate the route.

Among the monuments built in miniature, we can mention:

The miniature of Aigle castle.

The miniature of a suspended footbridge along the bisse of Savièse.

The miniature of “Plein Roc” restaurant at the Rochers de Naye.

The miniature of the Riddes-Isérable cable car.

The Kuklos restaurant in Leysin.

On busy days, the park is clearly a victim of its own success. For this reason, a 4000 m² expansion project began in 2016 and will last around ten years at a cost of several million francs. Visitor numbers, currently at 100,000 visitors per year, are set to increase.

Chablais-City station on a busy day.

In addition to the food and drink selling points, nice picnic places are available such as those along the small lake. The Swiss Vapeur Parc is closed in winter.

Picnic places next to the lake.

Paid parking next to the park. In case of heavy affluence the car park is moved further away and a bus service brings the visitor to the park.

The Swiss Vapeur parc is open from March to November, all-day tickets cost the following amount:

A video on Swiss Vapeur Park.