The Valais bisses museum (Musée valaisan des bisses in french) is located in the village of Botyre in the municipality of Ayent. It is housed in a pretty 17th century building called the “Painted House”.

The painted house that hosts the museum.

A bisse is an open-air canal that carries water to agricultural land for irrigation. It can be dug into the ground, the rock and, most impressive of all, when it hangs on a rock face and is then made of wooden boards called chenaux in french.

On 4 levels and nearly 300 m2, the museum presents all aspects related to the bisses with the help of archival documents, objects and videos. The themes addressed by the museum are as follows:

A magnificent interactive map (at point 11) allowing you to locate on the screen each bisse of the valais.

Two balconies provide a view with an orientation table over the many bisses in the region.

View towards the South. 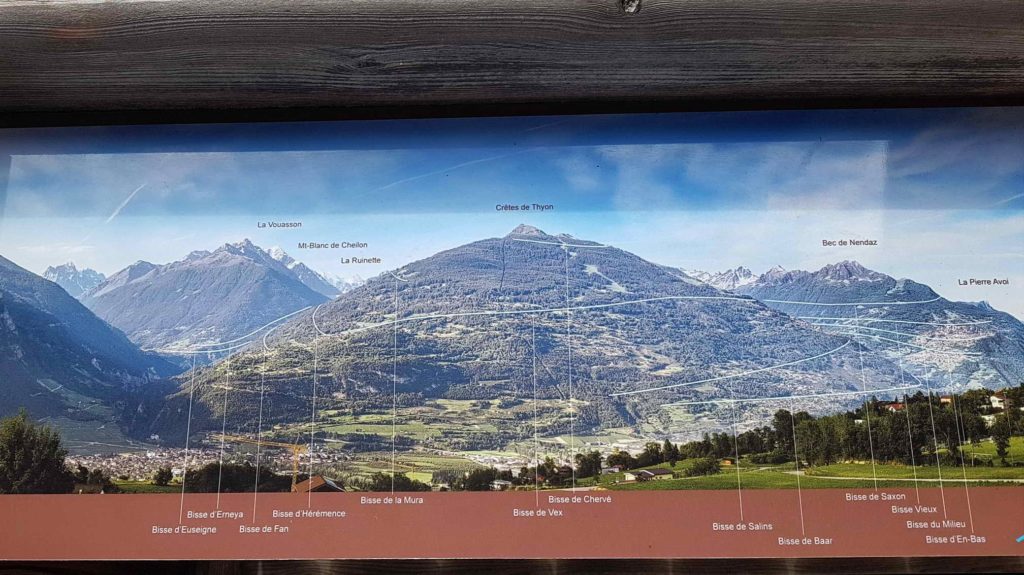 View towards East with mainly the bisse de Lens.

The outside of the museum includes tables for drinking a glass but above all the reconstruction of bisses with their door to supply them with water as well as the house of the person who was in charge of the bisse. This small attraction will undoubtedly appeal to children and offers a plus to the museum.

The house of the bisse keeper.

Water supply and doors to allow water to circulate in the ground or on “bazots” that are trunks dug in length.

Warning hammer to indicate to the keeper if the flow rate of the bisse is adequate. If the hammer struck too quickly, it meant too much flow and otherwise too little flow.

A video on the bisses museum.

A video on the bisse de Saxon keeper.