Since the 2019-2020 season, the Charmey ski resort in the Gruyère region has had a beautiful sled run with very good gliding on snowy paths shared with skiers or directly in the field on a dedicated slope. Despite the low altitude, the run has good snow cover thanks to a north-east orientation and the highest average slope with the Anzère run.

The Gruyère region offers 3 sled runs with Charmey, Jaun and Moléson. The Charmey run is by far the best as the other two runs require walking on several sections of the course.

⚠️ Warning: the ascents by chairlift are not very convenient, especially if you have small children with you. The sledges and bobsleds are placed on the chairlift…. It seems that the chairlift will be equipped with side hooks next season …

⚠️ At the moment, the sled run is only open at weekends. However, the track may be open on some weekdays, please check the Facebook section for more information.

A passage under the Dents Vertes mountain range. 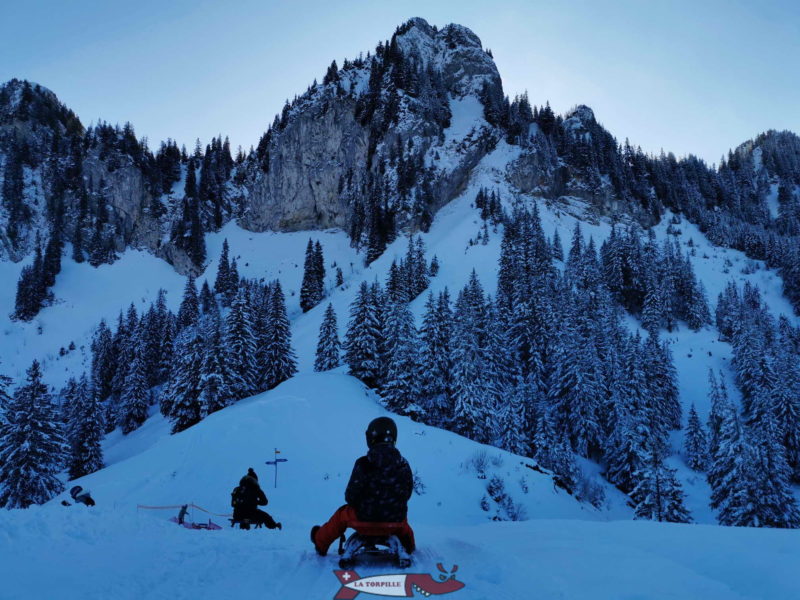 Paid parking at the beginning of the telecabin in Charmey station. The cost is 1 franc per hour or 5 francs per day. It is not possible to get to the bottom of the chairlift by car. 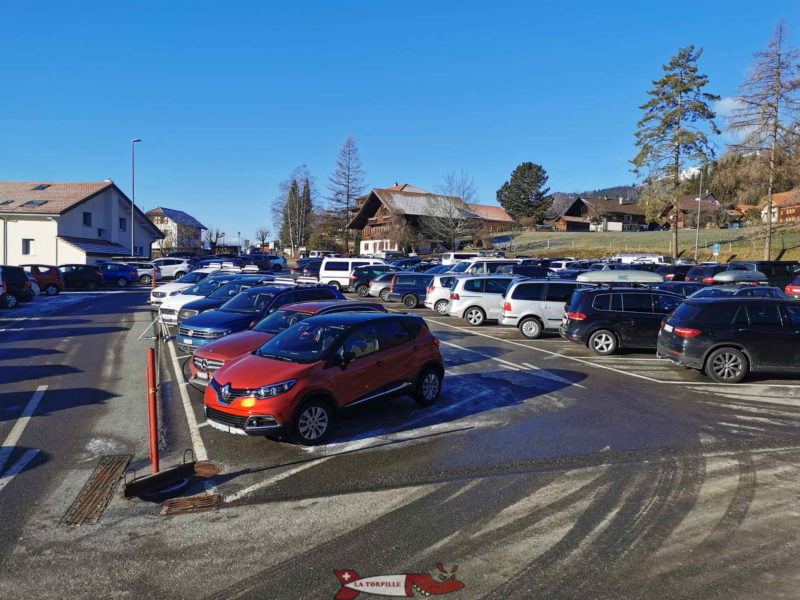 The top of the Charmey sled run can be reached by the telecabin that runs from the resort at 887 metres to Vounetz or Vounetse at 1610 metres. The sledder goes down the toboggan run to the place called “la Scie” at 1176 m from where a 4-seater chairlift takes you back up to Vounetse.

Halfway down, it is possible to take a slightly steeper section of the run, but the “easy” run seems to us the most interesting for the tobogganer.

The Charmey tracks map with the toboggan run on the left. Photo: charmey.ch

The sledger takes his sled with him in the telecabin to the top of Vounetse.

The departure of the Vounetse telecabin. 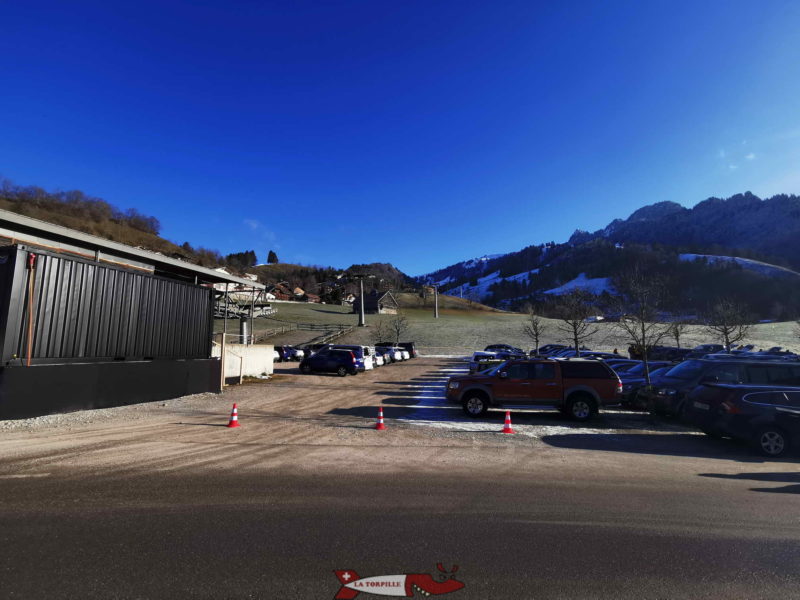 The cabins at the bottom station. 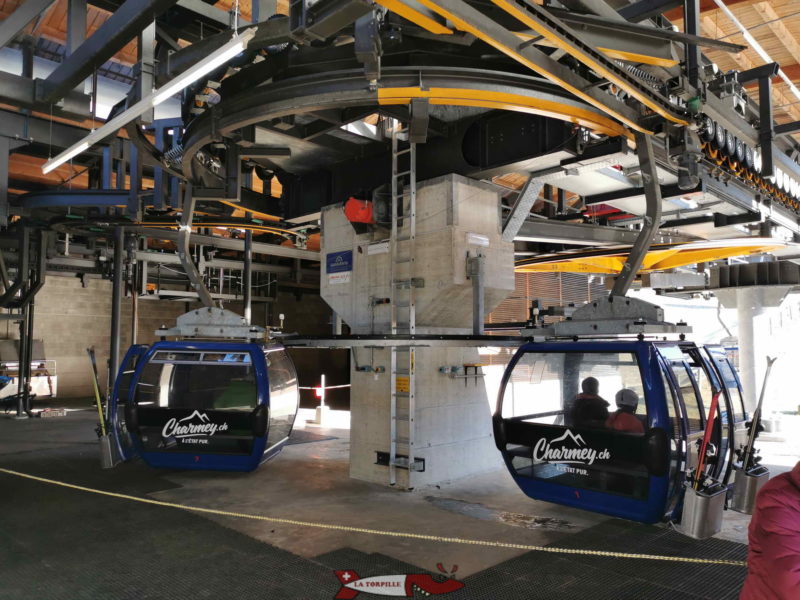 The view of the sunny Vounetse summit on the way up. 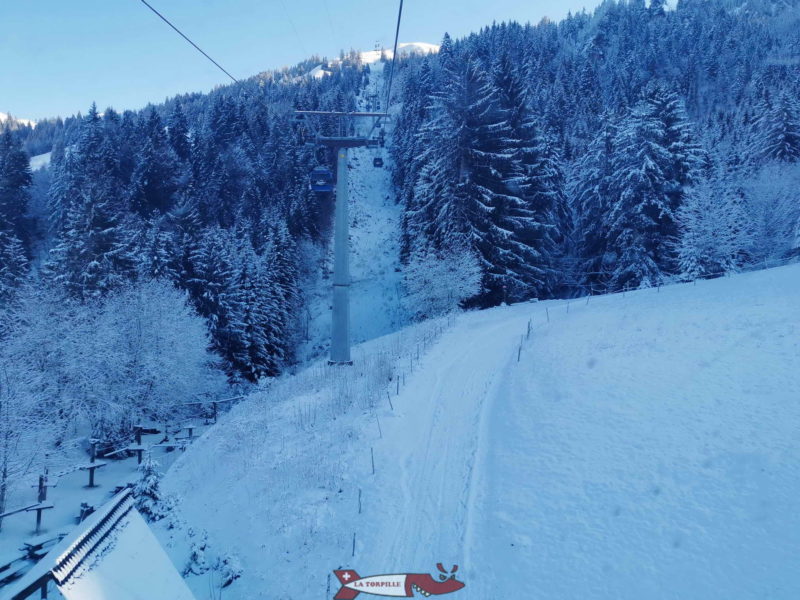 The view of the Gruyère region with the Moléson on the way down. 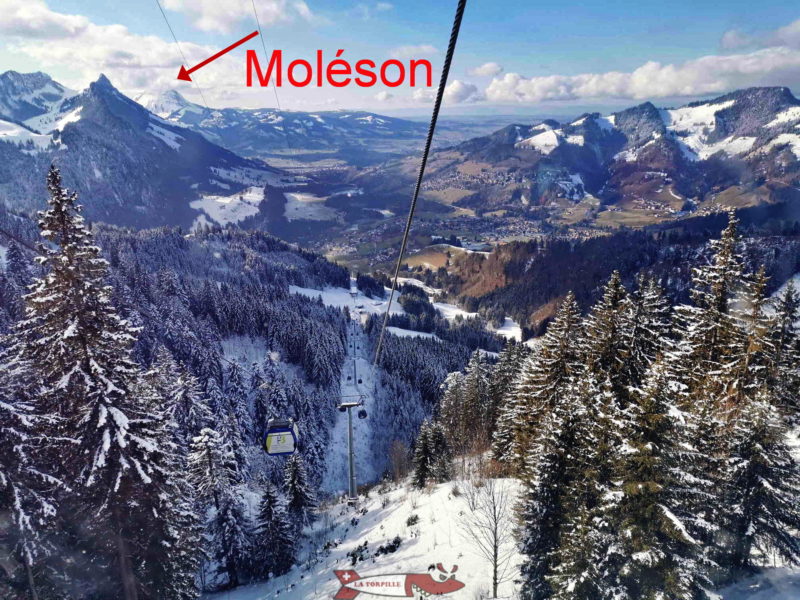 Vounetse located under the Dents Verts offers a view of the Pre-Alps and the Gruyère region. 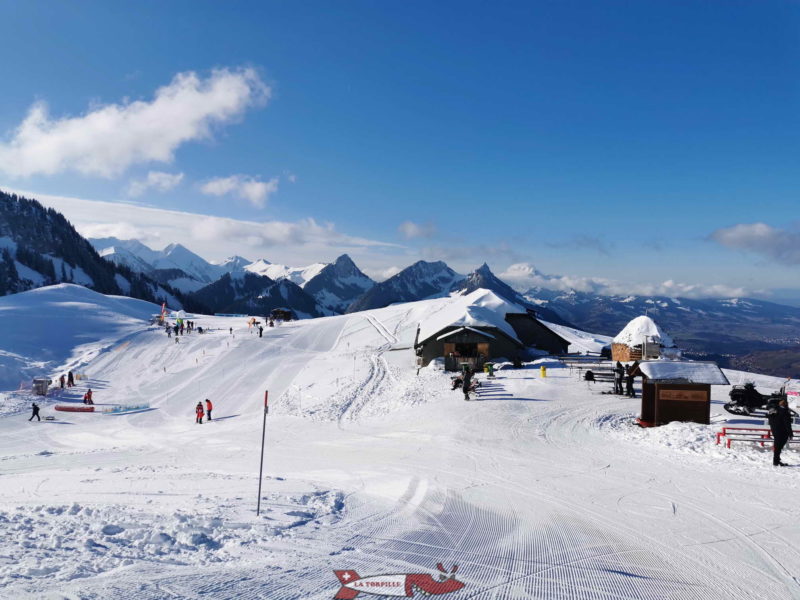 North view with the restaurant. 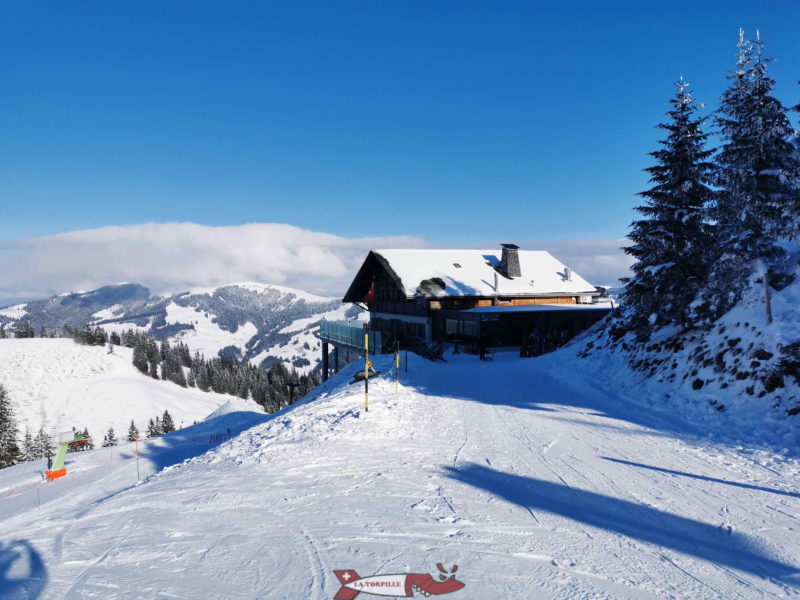 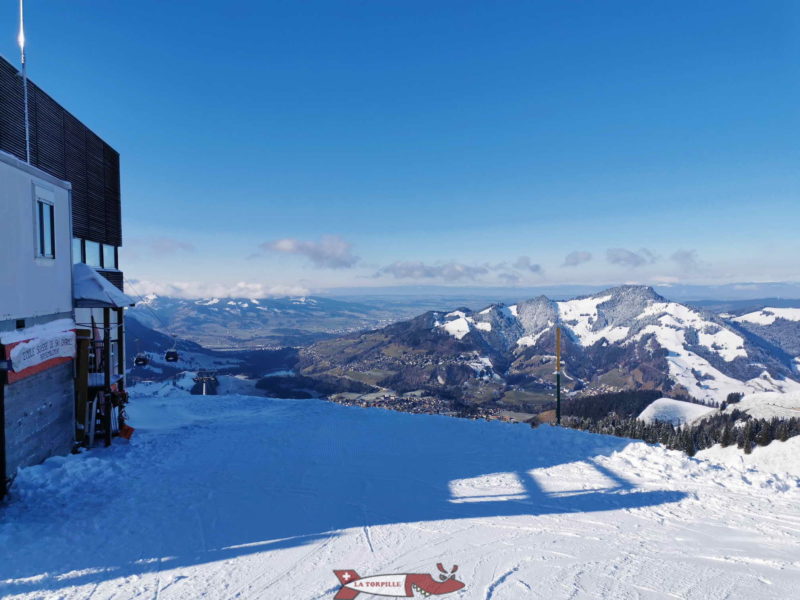 The sled run starts directly on the right as you leave the telecabin. Follow the purple coloured signs; purple stakes can also help. The track consists of two parts, in order:

The purple marking of the toboggan run. 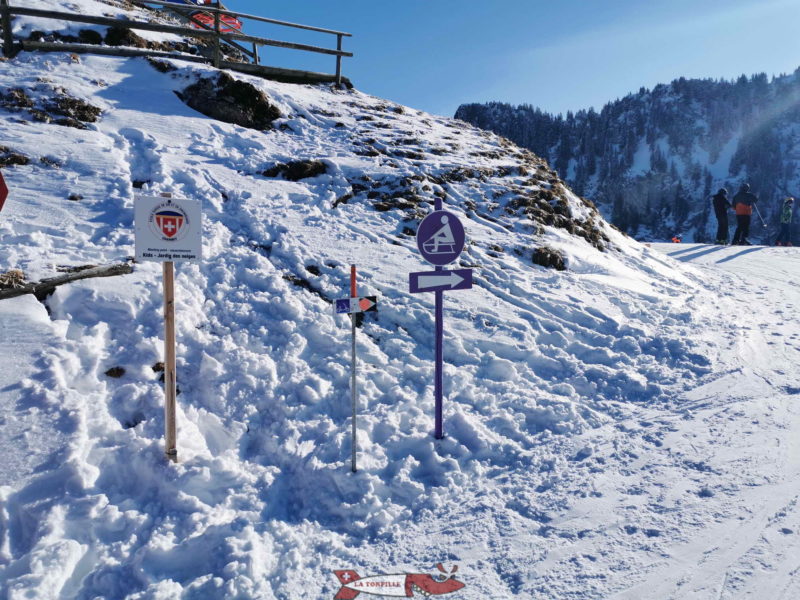 The start of the toboggan run. 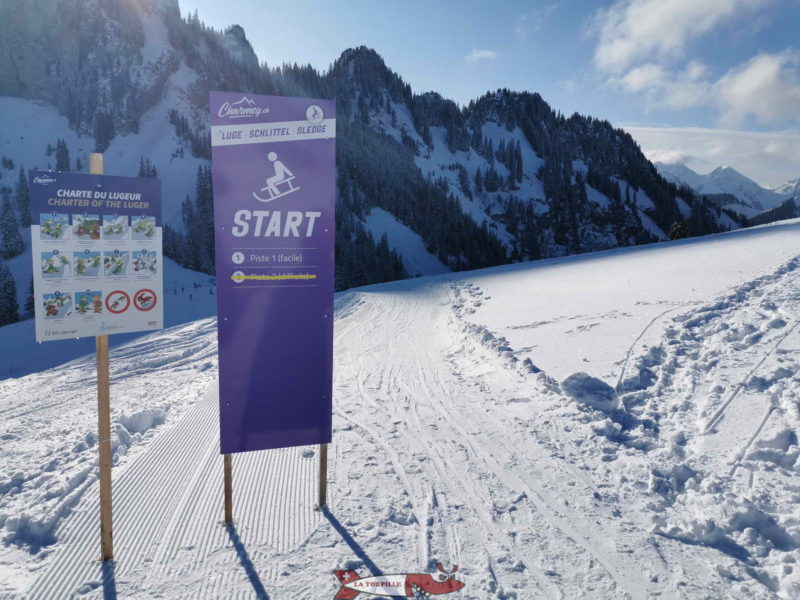 The Pre-Alps as background of the track. 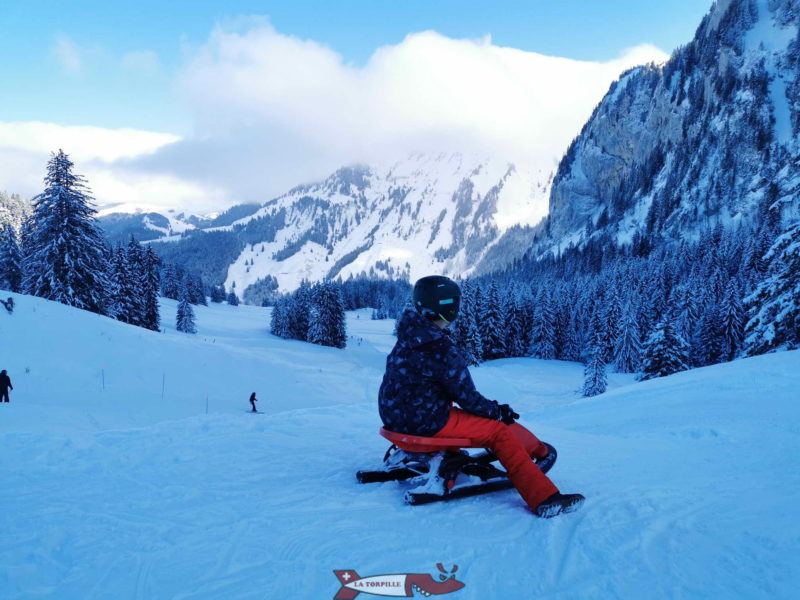 A part of the track shared with skiers. 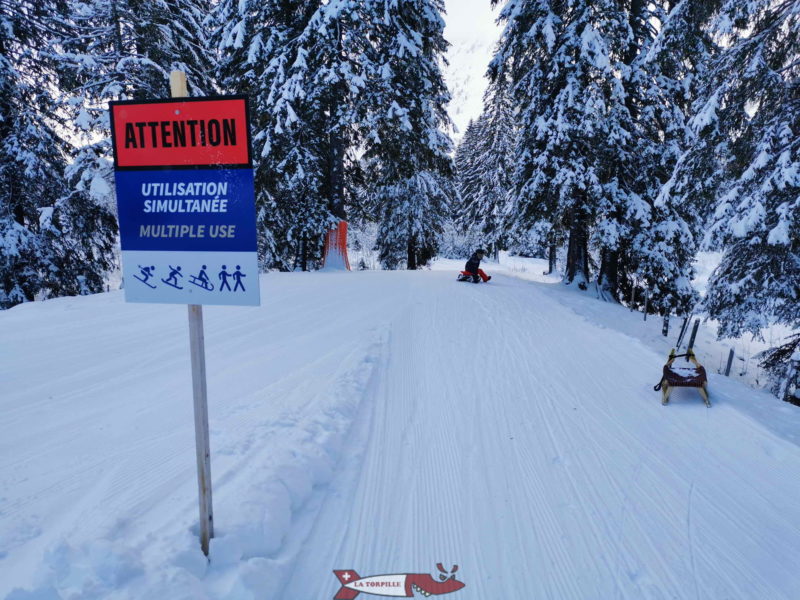 The track on the snow-covered road. 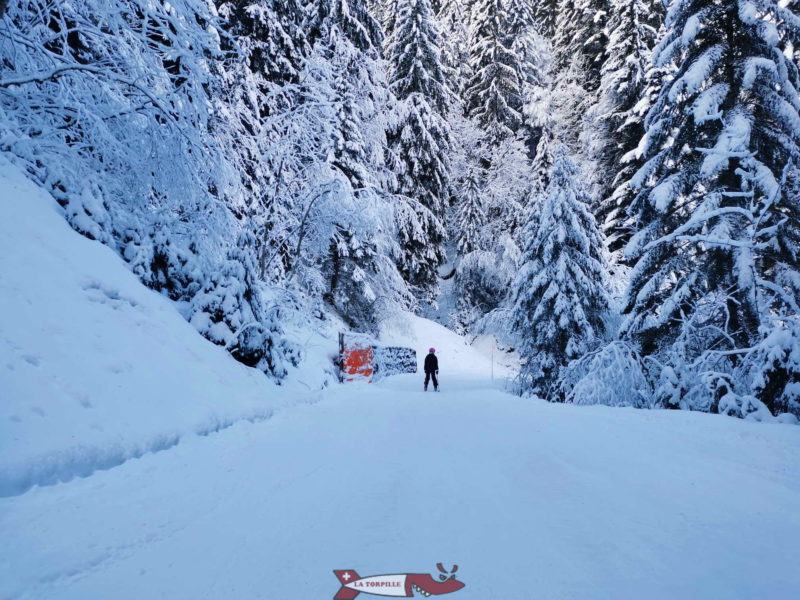 The end of the trail with the departure of la Scie chairlift. 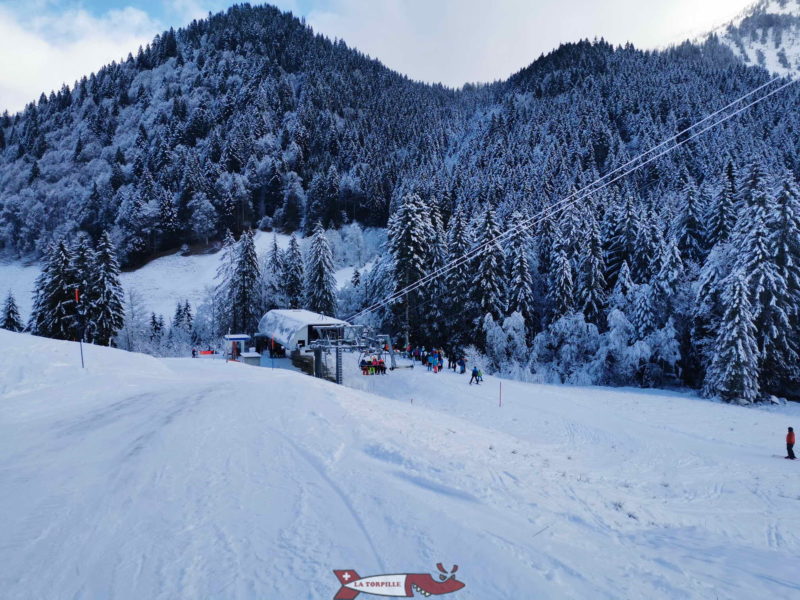 La Scie chairlift is a 4-seater lift that takes you to the top of the Vounetse sled run. The sledges are placed by the friendly lift staff on the chairlift itself which is not very convenient. La Torpille has even experienced damage to its equipment because of this mode of transport. 🙁 It seems that hooks might be added to the chairlift for the 2020-2021 season. To be confirmed…

The departure of la Scie chairlift. 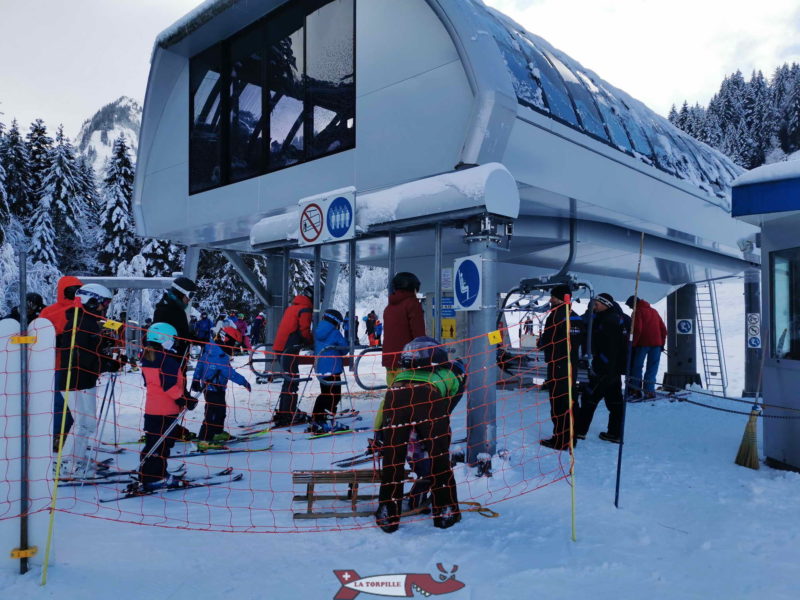 The ascent by chairlift with the ski lifts under Vounetse. 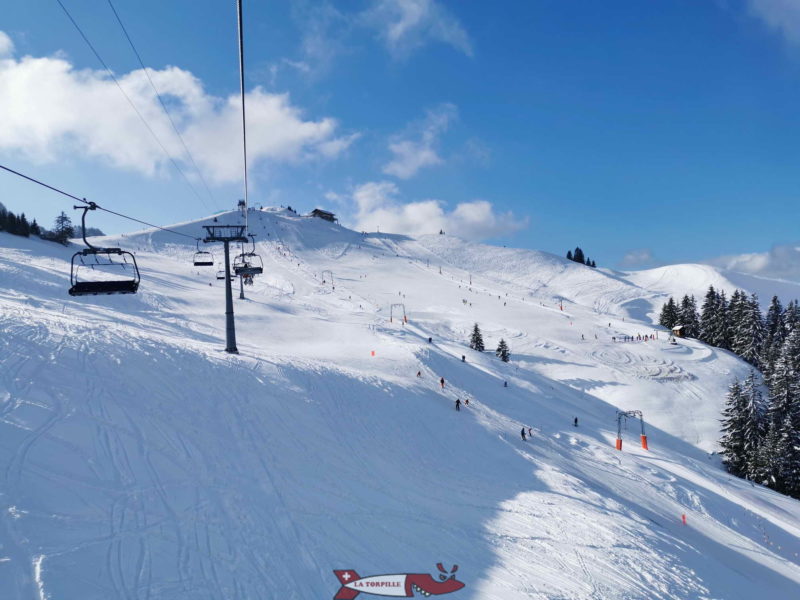 The prices for sledging in francs are as follows: (1 chairlift ride/1 day)

Packages include the ascent and descent by telecabin. The sled run is only open at weekends.

The sledge rental costs 10 francs for a descent or for a day.

The cash desk in the telecabin departure station. 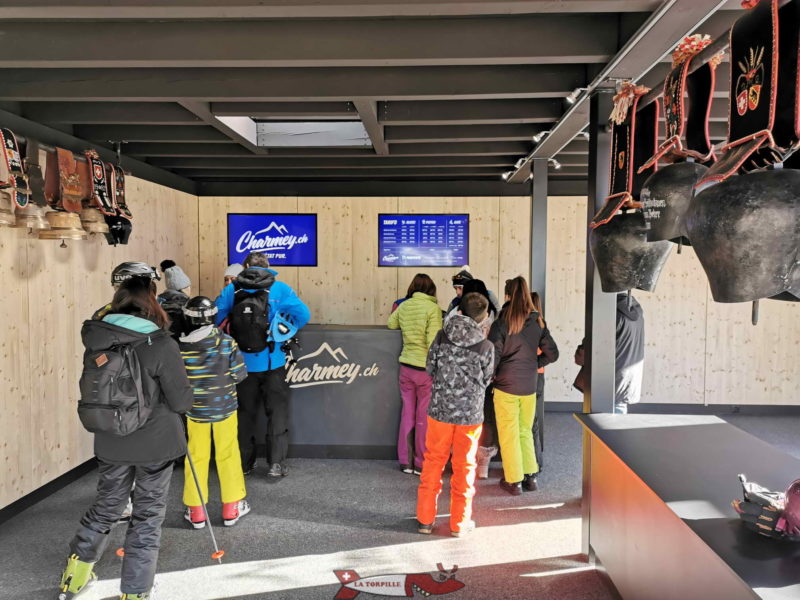 After sledding, it is possible to continue your day with the thermal baths of Charmey located a few hundred meters from the telecabin car park by taking the main road in the direction of Bulle.

The building of the thermal baths in the village of Charmey.

Webcam from the top of Vounetse towards North-East.