The castle of Yverdon is a beautiful medieval building in the centre of the town. It houses the museum of Yverdon and its region and has interesting structures to visit such as its courtyard, cellars, chapel and keep.

The castle of Yverdon with its keep on the left. 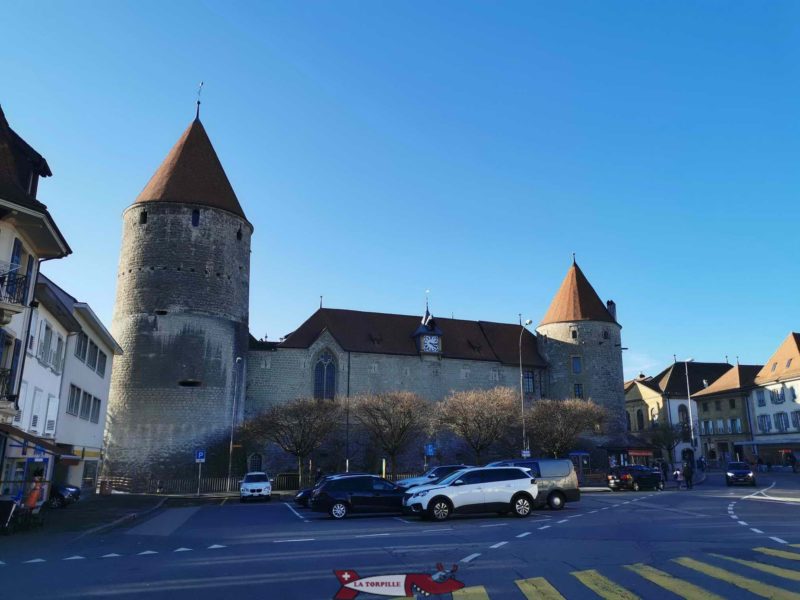 Paid parking right next to the castle.

The construction of the castle of Yverdon began in 1235 with a circular tower under the orders of Amédée de Montfaucon, lord of Orbe. It is quickly bought by the Savoyards and Pierre II in 1265 to serve as a base for the takeover of the Pays de Vaud. The castle was then enlarged to its current quadrangular shape known as the “Savoyard square” as for example at the castles of Morges or Bulle.

The castle was burnt down during the Burgundian Wars at the end of the 15th century and then conquered in 1536 by the Bernese. Following the Vaud revolution in 1798, it became the property of the new canton of Vaud and was finally sold to the town of Yverdon.

Although the exterior is well preserved, the interior, which houses the Museum of Yverdon and its Region, no longer has its original appearance. Despite this, 5 places in the castle are very interesting to visit.

Two pretty models near the reception area show the castle’s appearance in the Savoy and Bernese periods. For example, it was, in those times, surrounded by the water of the Thièle river and an outer wall. In the 14th century, the tops of the towers had hoardings, a sort of wooden balcony used for defence.

The castle of Yverdon in the 14th century in the time of Savoy. 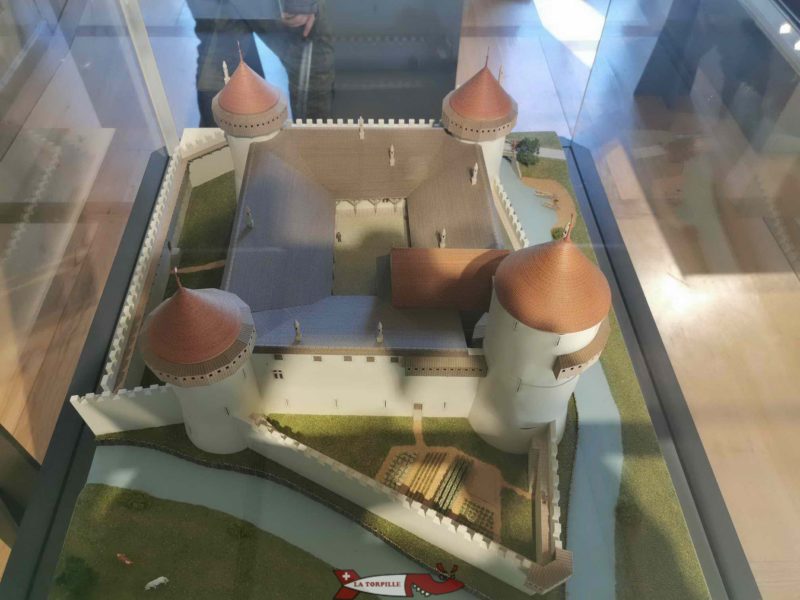 The castle of Yverdon in the 17th century at the time of Bern. 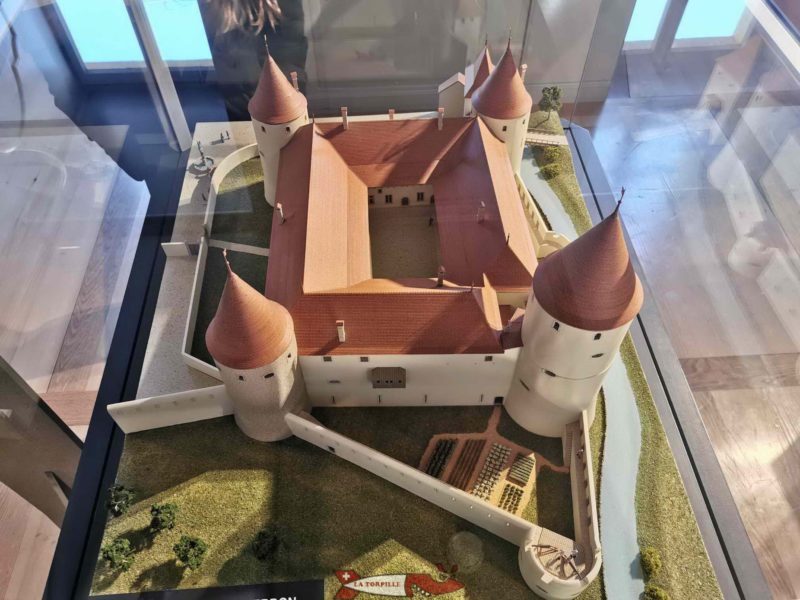 The cellars of the castle are at the level of the street. They exhibit old boats.

A Gallo-Roman boat on display in the cellars of the castle of Yverdon. 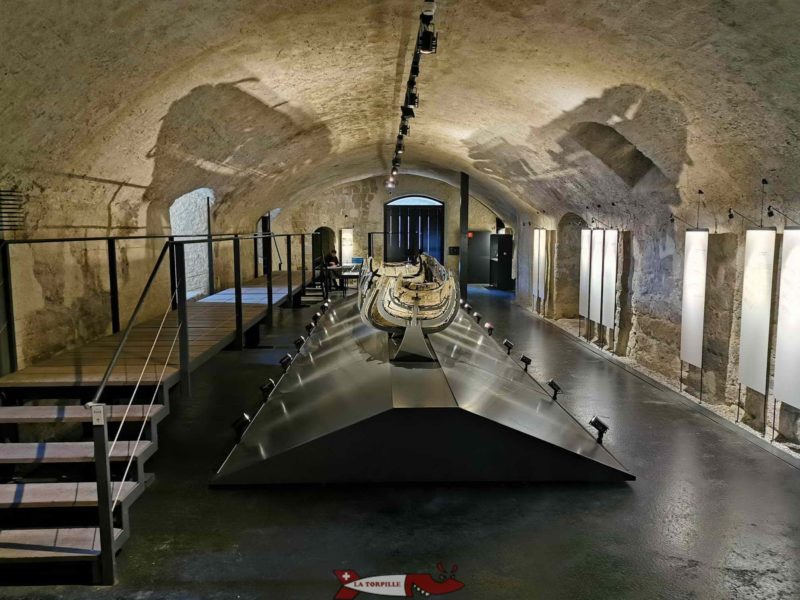 The courtyard is on the reception level.

A part of the courtyard. 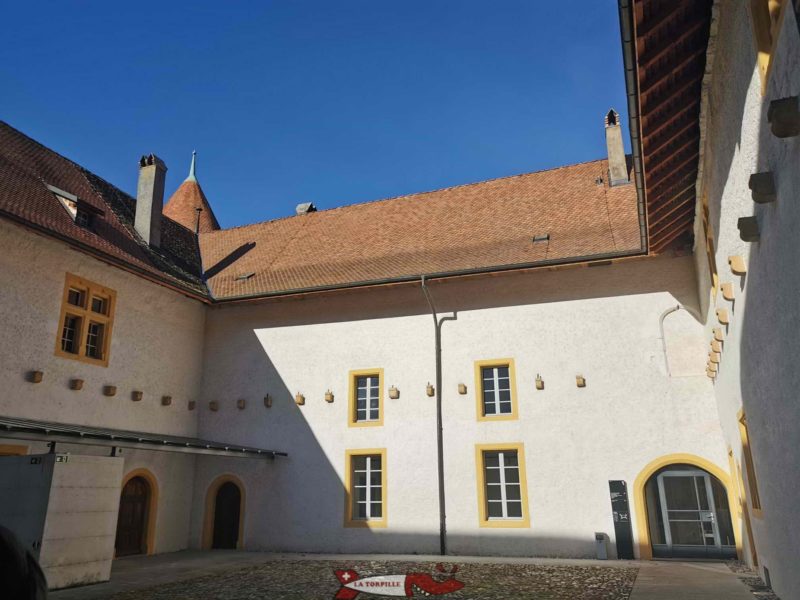 The courtyard with the keep. 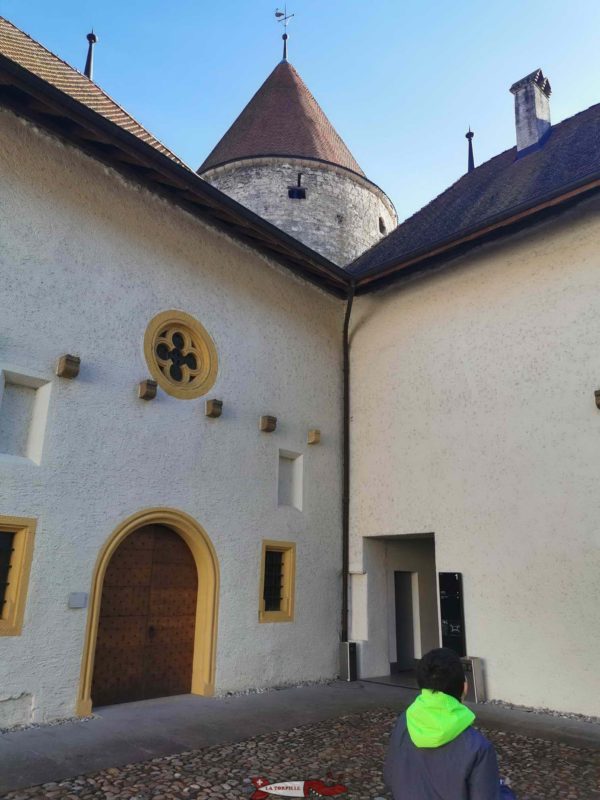 The chapel is on the first floor of the courtyard. It can be seen via a footbridge on the second floor.

The footbridge above the chapel. 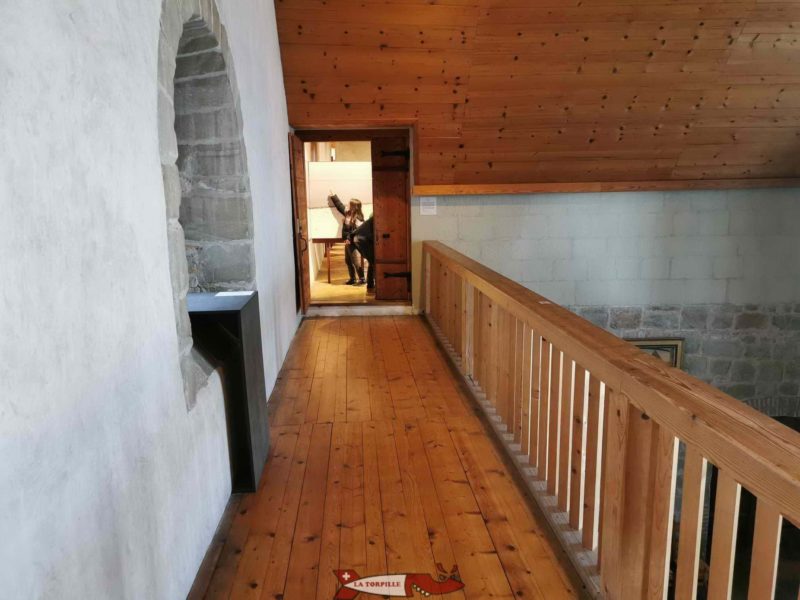 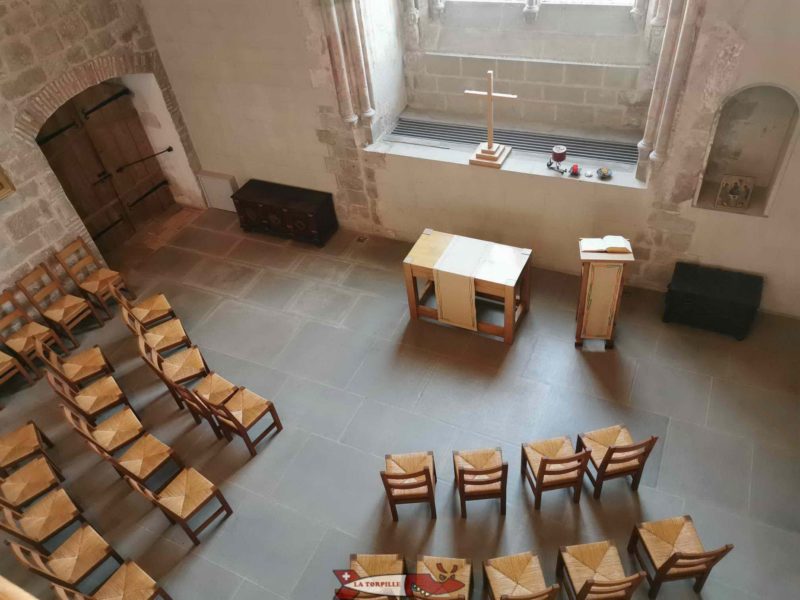 The large stained glass window of the chapel visible from the outside. 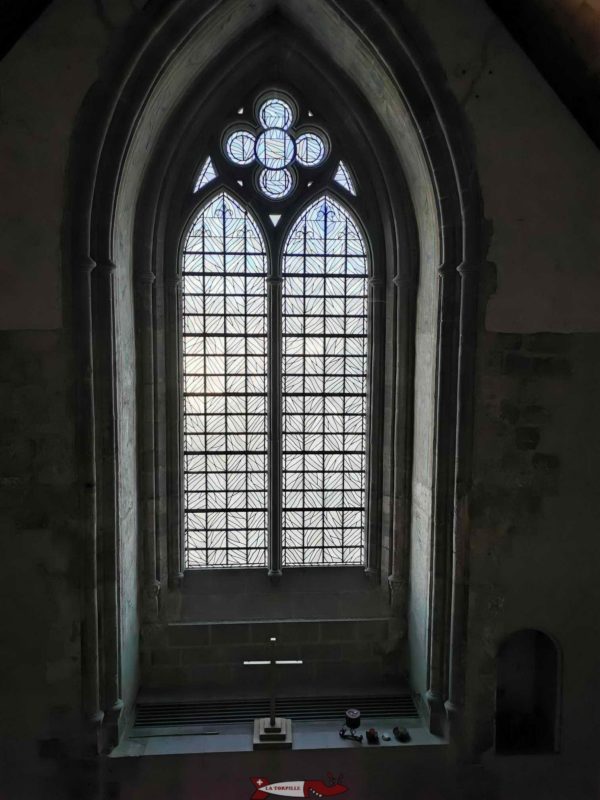 An old stained glass window from the Savoy period. 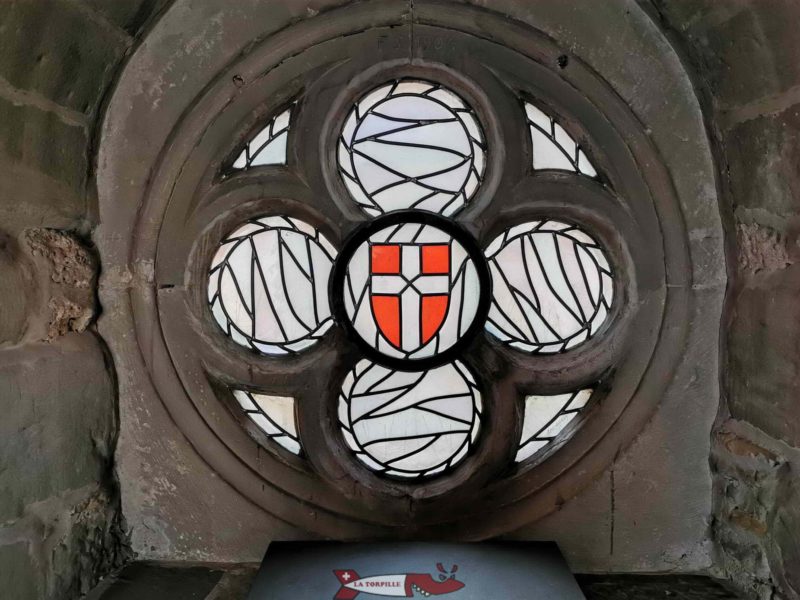 The keep is the most interesting part of the castle to visit. It is completely separated from the castle and was connected to it by a drawbridge.

The keep is completely separated from the rest of the castle. 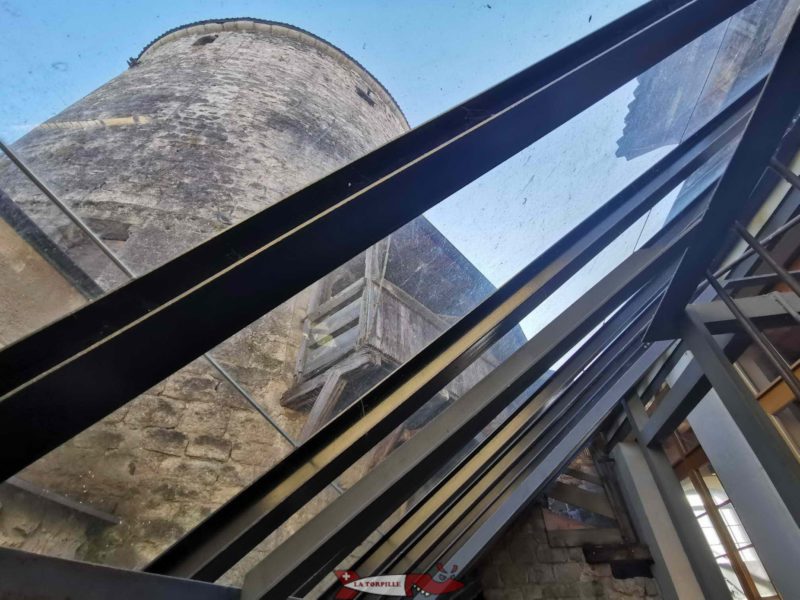 The first visitable floor of the keep is at the same level as the 3rd floor of the castle. Collections of antique firearms are exhibited. 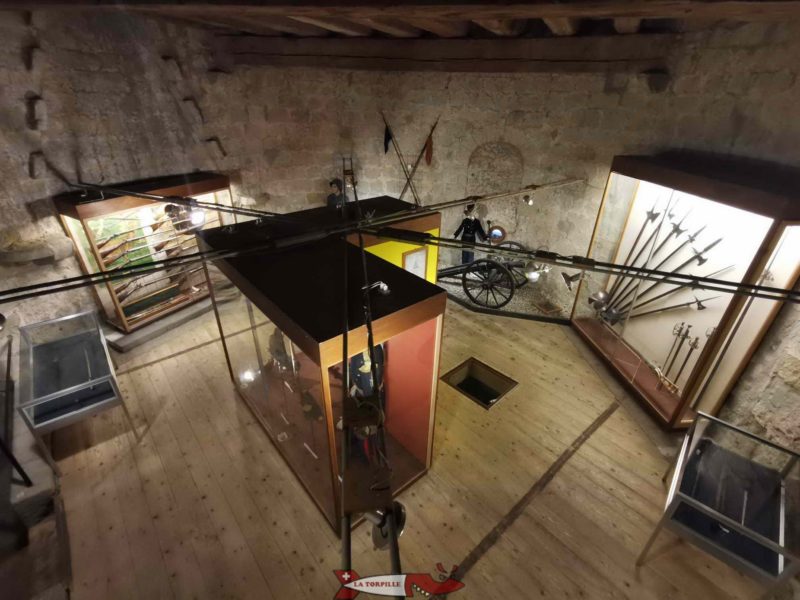 The 2nd visitable floor of the keep. Exhibition of old bicycles against the wall. 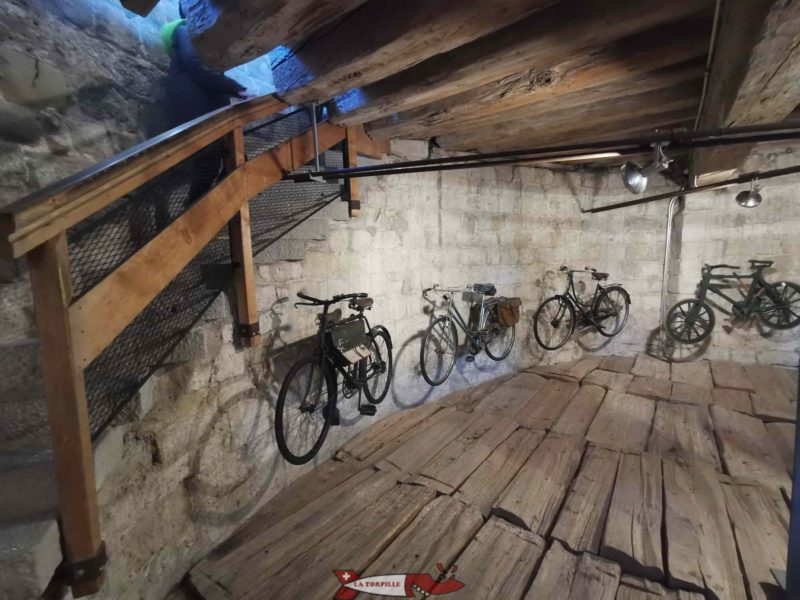 The 3rd visitable floor and the last level of the keep. 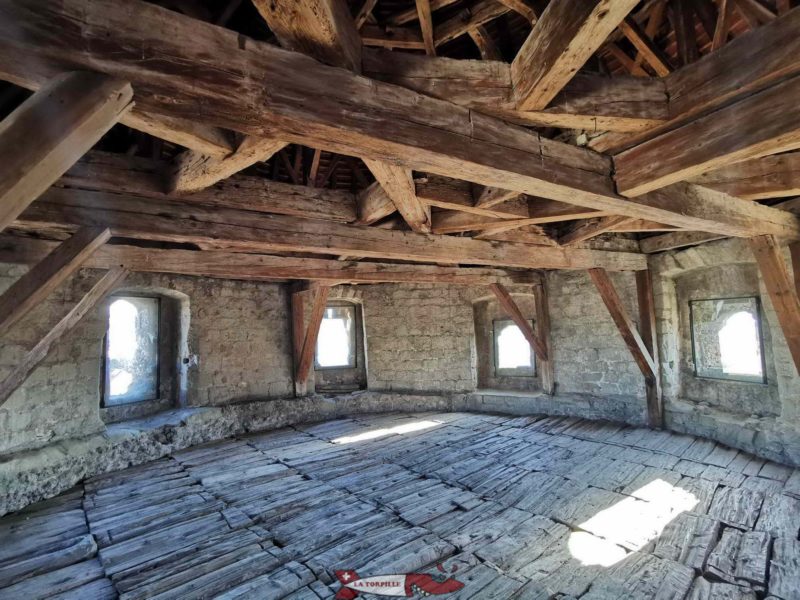 A drone video over the Yverdon castle.

A webcam in the city of Yverdon.