🚂 Vaud Riviera Trains and Funiculars in 2020

🚂 Vaud Riviera Trains and Funiculars in 2020

In addition to the SBB line running along Lake Geneva from Lausanne towards Simplon, there are numerous railway lines on the Riviera that go up towards the surrounding mountains. These lines are managed by Transports Montreux-Vevey-Riviera (MVR) or the Montreux Oberland Bernois (MOB).  The GoldenPass Services brings together these 2 companies under a single logo and takes over their management and operation.

The Territet-Glion funicular with the GoldenPass logo. 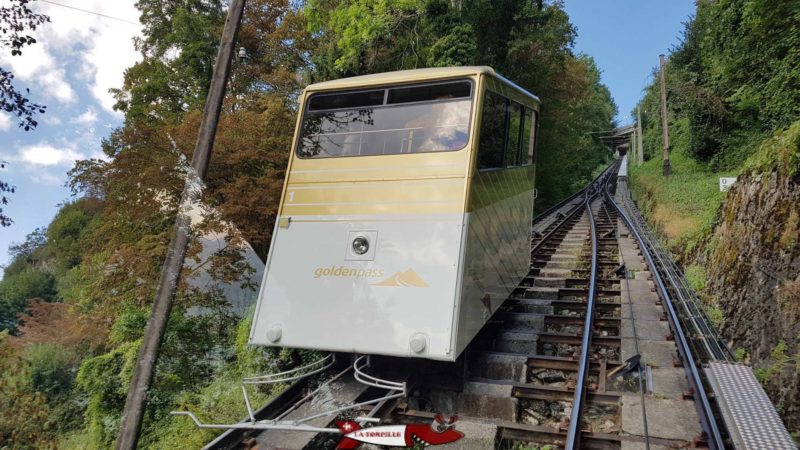 The train and funicular lines of the Vaud Riviera can be divided into several parts:

Map of all the trains and funiculars of the Riviera on the tablet of the Pléiades train. As you can see, the funicular lines are interconnected with the different railways and the GoldenPass railway lines start at the Vevey and Montreux SBB stations.

A map at the Montreux museum with the construction dates of the different lines. 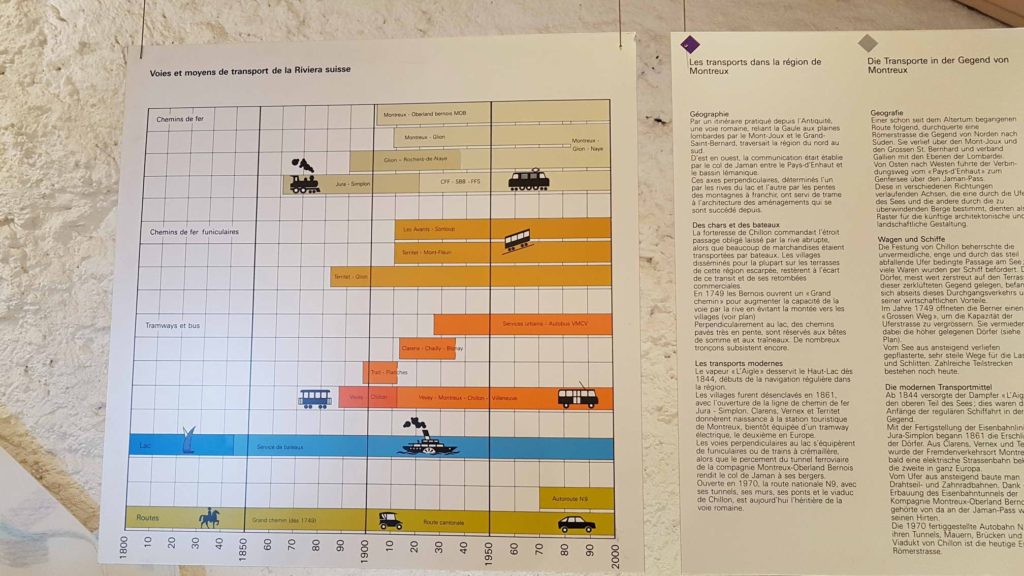 In the 1960s, the car, as it became more accessible, posed a threat to the trains of the Riviera, but fortunately, the vast majority of these lines have survived today with the notable exception of the line that linked Châtel-Saint-Denis to Saint-Légier.

All train and funicular tracks in the Golden Pass have a metric gauge, i.e. the gauge between the rails is 1’000 mm. The only exception is the Rochers de Naye with a gauge of 800 mm.

The metric rack track of the Pleiades train. 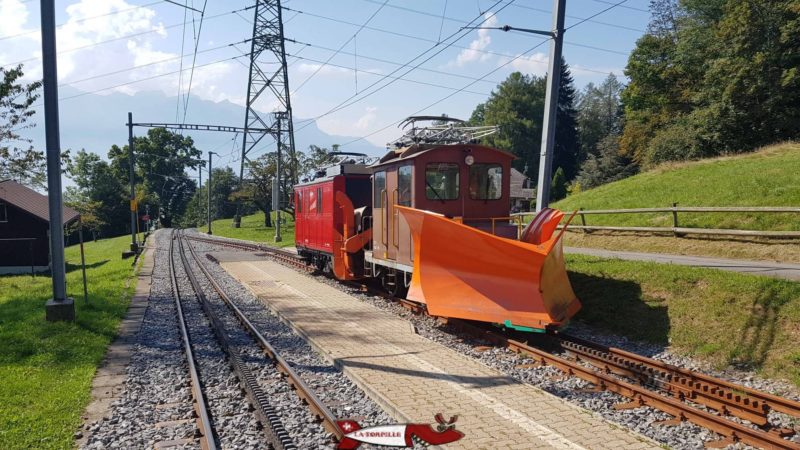 The international standard gauge for a railway track is 1435 mm, which is the one used by the Swiss Federal Railways (SBB). The definition of this gauge was chosen for the first railway line in 1825 in England and later became a standard. It is interesting to note that this gauge was defined 2’000 years ago by the Romans in relation to the way their chariots ran.

The Montreux Oberland Bernois train connects the Montreux SBB station to Zweisimmen in the Canton of Bern via Les Avants (VD), Montbovon (FR), Château d’Oex (VD) and Gstaad (BE).

It allows you to discover the Lake Geneva basin and the green landscapes of the Bernese Oberland. 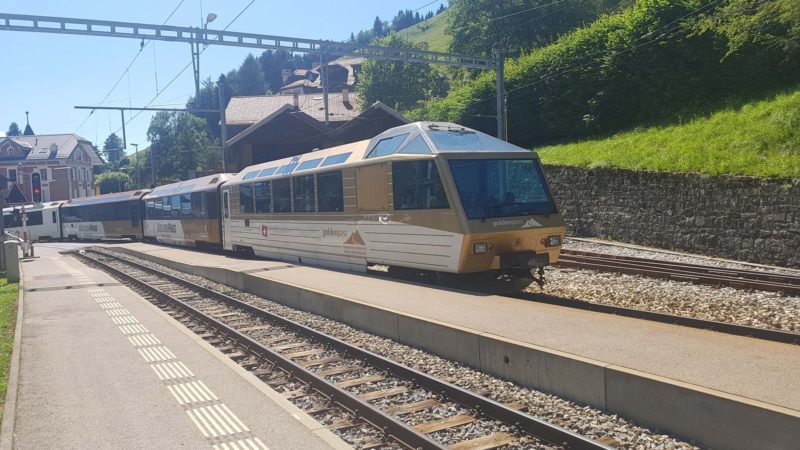 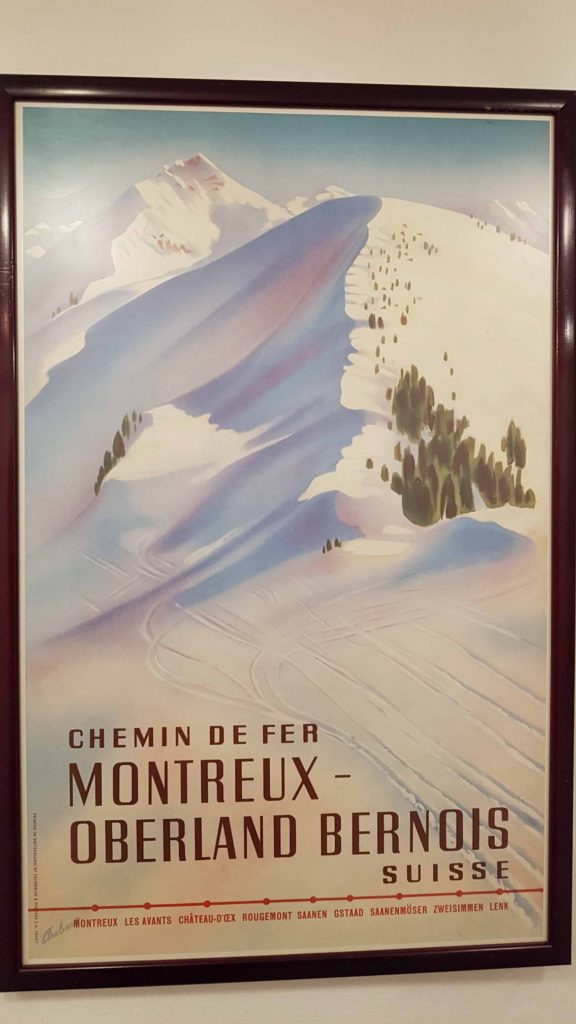 A vidéo on the MOB train.

The Vevey – Les Pléiades train connects the Vevey SBB station to the summit of Les Pléiades via Saint-Légier and Blonay. From Les Pléiades, you can enjoy the Astropléiades park dedicated to the observation of the sky and a view of the Lake Geneva basin and the Fribourg Alps. 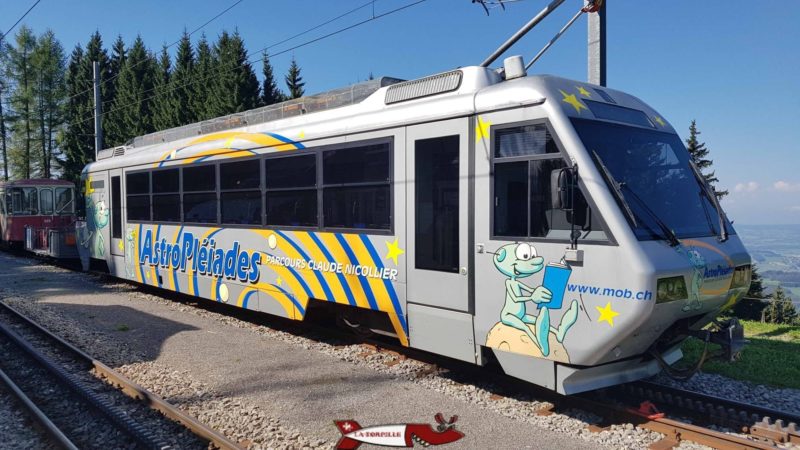 A video about the tVevey – Les Pléiades train.

The funicular connects Vevey, next to the Vevey Funicular SBB stop, to the village of Mont-Pelerin via Chardonne and the vineyards of the Vaud Riviera.

From the village of Mont-Pelerin you can enjoy a view of the Lake Geneva basin.

The Vevey-Mont-Pelerin train in the vineyard. 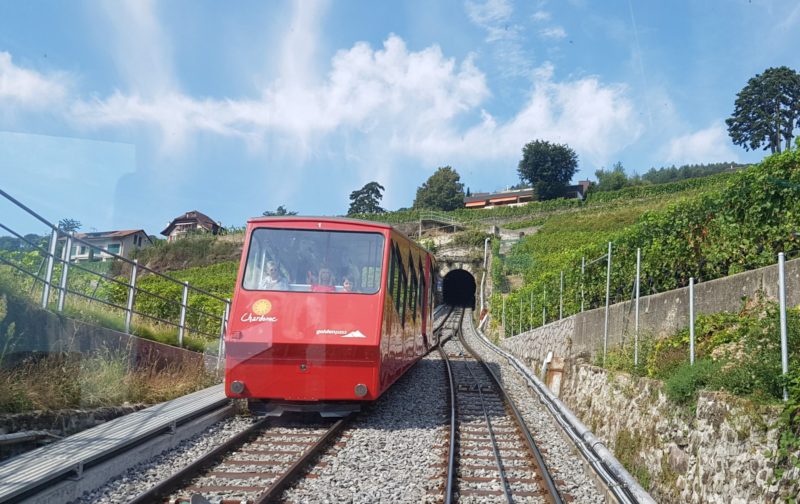 Retro advertisement on the Mont-Pelerin funicular displayed at the Montreux museum. 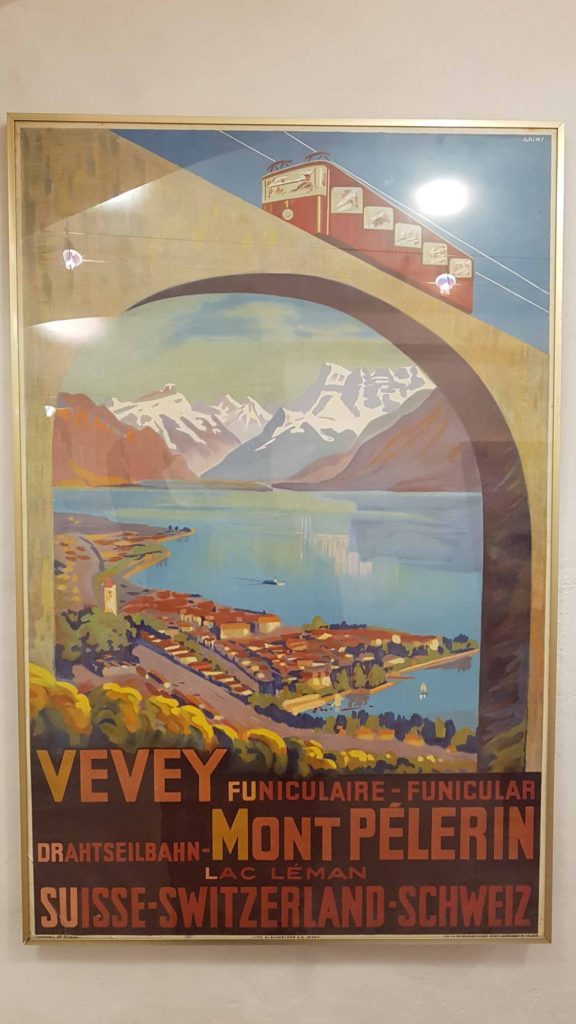 A video on the Vevey- Mont-Pelerin funicular.

The Avants – Sonloup funicular connects the village of les Avants next to the MOB station to the top of the Sonloup hill near the old hotel.

From Sonloup, you can enjoy a view on the west side over the Lake Geneva basin and les Pléiades and on the east side over the Rochers-de-Naye and the village of les Avants. 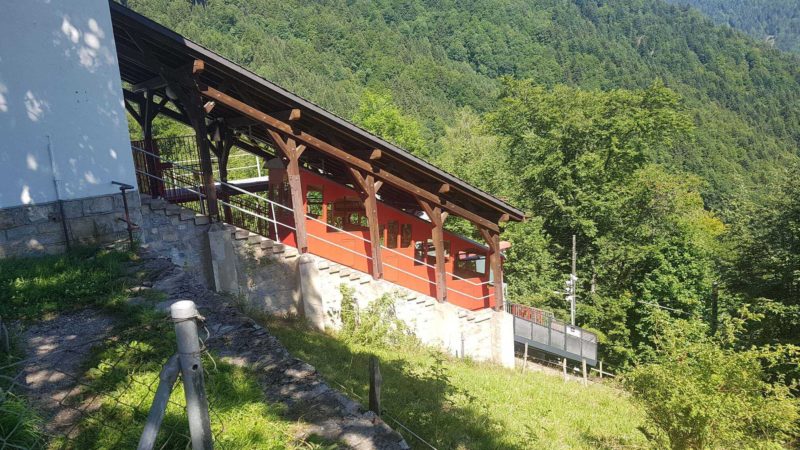 Retro advertising on the funicular les Avants – Sonloup displayed at the Montreux museum. 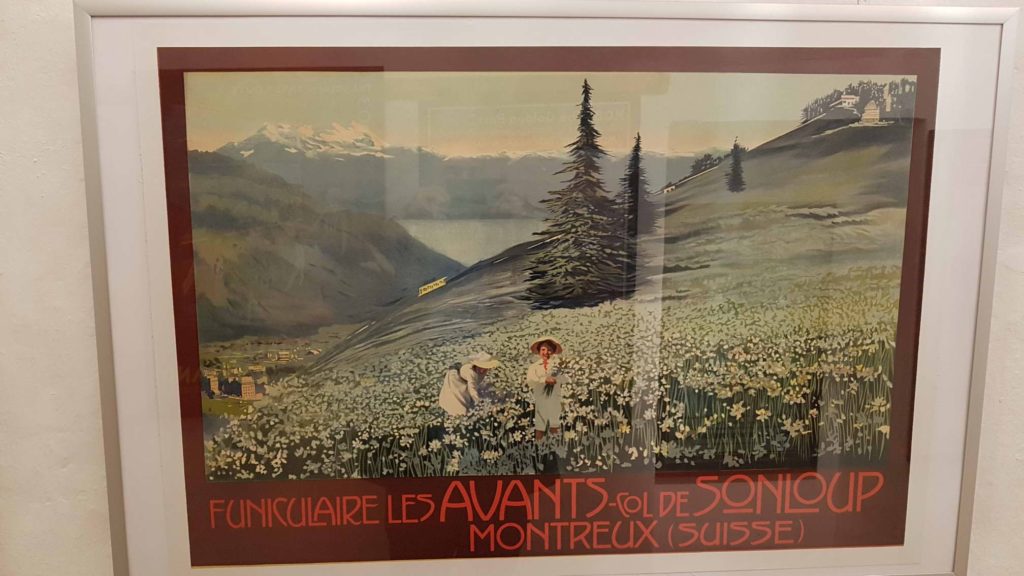 A video about the Avants – Sonloup funicular.

The Rochers de Naye train connects the Montreux SBB station to the summit of Rochers de Naye at an altitude of almost 2,000 metres. From Rochers-de-Naye you can enjoy an extraordinary view of the Lake Geneva basin and the Alps. Other activities are available at the same place such as the enclosures of the Marmotte Paradise and the alpine garden of the Rambertia.

In winter, the train is used by skiers. 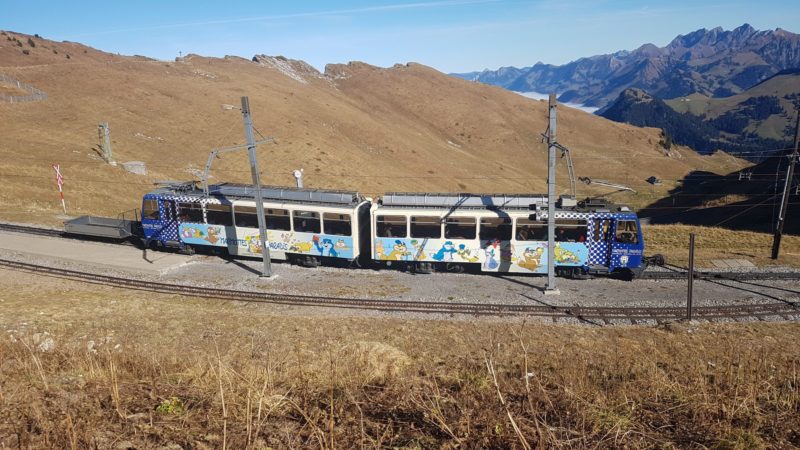 A video on the Rochers-de-Naye train.

The Territet – Glion funicular is the oldest funicular in French-speaking Switzerland. The villages of Territet and Glion are both located in the commune of Montreux on the Vaud Riviera. From Glion you can enjoy a beautiful view of the Lake Geneva basin and the village is situated on the course of the Chauderon gorges.

The Territet-Glion funicular halfway up.

Retro advertisement on the Territet – Glion funicular displayed at the Montreux museum. 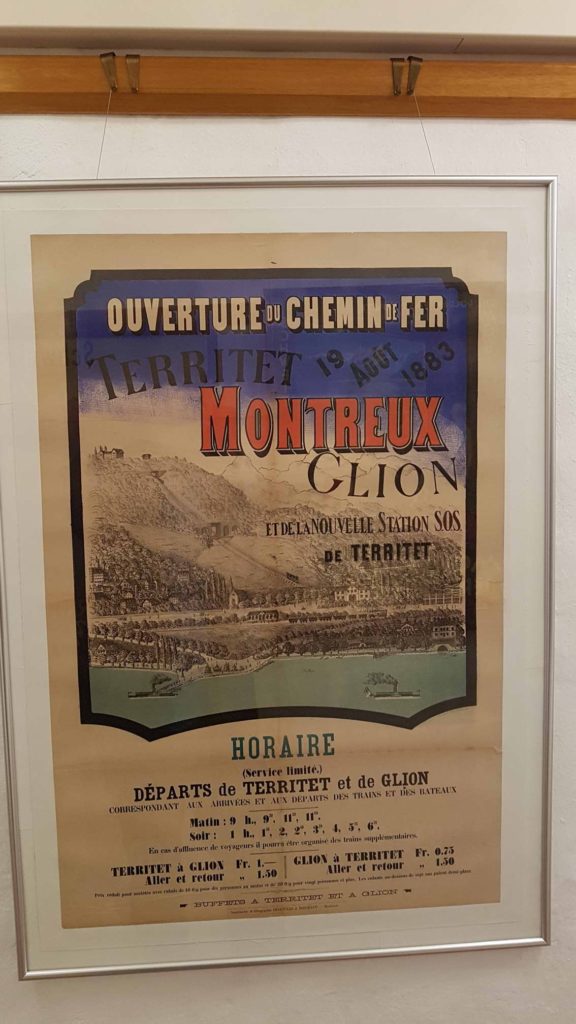 A video on the Territet – Glion funicular.

The Blonay-Chamby train line is a tourist train line opened in 1969 and runs old trains, especially those pulled by a steam locomotive. In the middle of the route is the Chaulin shed-museum where old trains and tramways can be visited. 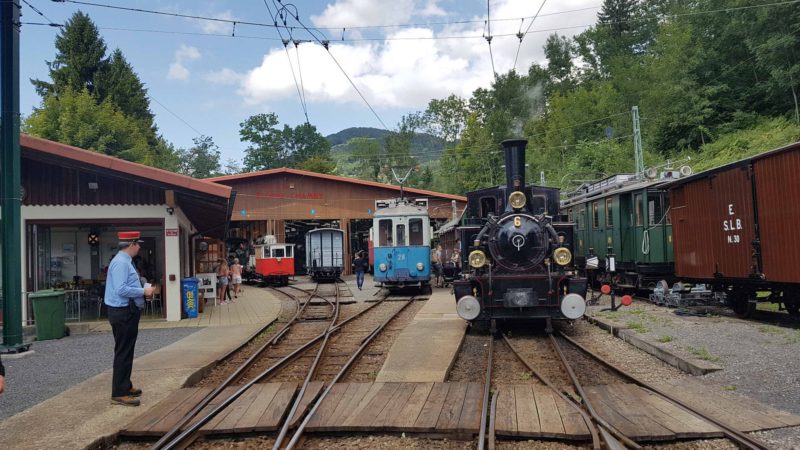 Retro advertisement on the Blonay – Chamby train displayed at the Montreux museum.

An unusual route, little known today, linked Châtel-Saint-Denis in the south of the canton of Fribourg to Saint-Légier in the heights of Vevey. This route, like the others on the Riviera, was built at the beginning of the 20th century at a time when only horses were used to travel. The very rapid development in the 1960s of the personal automobile caused the death of the line. 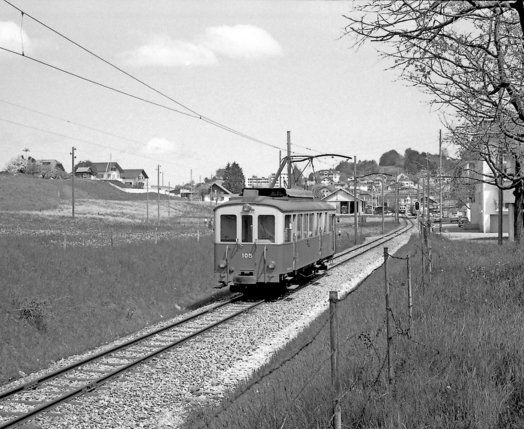 A video on the former St-Légier – Châtel train.

Retro advertisement on the Territet – Glion funicular displayed at the Montreux museum. 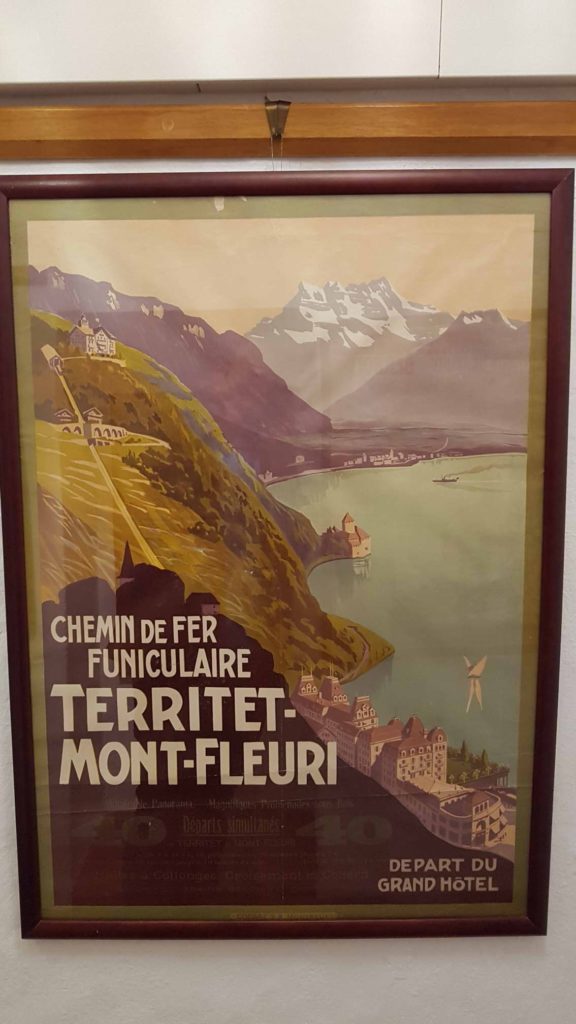